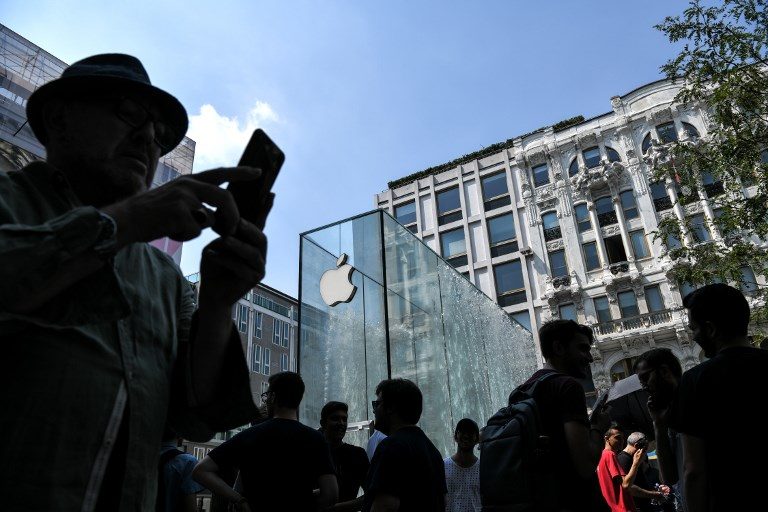 NEW YORK, USA – Apple – the culture-changing company behind the iPod, iPhone and iPad – hit another milestone on Thursday, August 2, US time, becoming the first private-sector company to surpass $1 trillion in market value.

The landmark is the latest victory for Tim Cook, who faced skepticism when he took over as chief executive in 2011 from ailing iconic co-founder Steve Jobs.

Jobs, who founded Apple in a Silicon Valley garage in 1976 with Steve Wozniak and built it into a global powerhouse, died in October 2011. (READ: Milestones: Apple’s road to a trillion-dollar enterprise)

After the death of master pitchman Jobs, analysts and other industry watchers wondered whether the company would lose its ability to create buzz for “the next big thing.”

But Cook has gradually won accolades from investors by pumping out a series of solid financial results and spreading Apple’s products to China and other foreign markets.

Apple is the first private sector company to reach this level. State oil company PetroChina briefly broke the $1 trillion barrier in 2007 during its initial public offering, but has since dropped back down. PetroChina’s valuation is said to be unreliable because “only 2% of the company was released for public trading,” says The Guardian.

US tech companies have cemented their position in the broader market, now making up the top 5 most valuable enterprises based on share prices.

Behind Apple are Amazon, Google parent Alphabet, Microsoft and Facebook.

A trillion dollars is roughly the annual gross domestic product of Indonesia, and more than twice that of Belgium, according to World Bank data from 2016.

As with other landmarks – such as the Dow crossing 25,000 points for the first time – the Apple record is significant because of its resonance beyond the financial universe.

“The $1 trillion mark is more psychological, and sends a message of growth and size into the market,” said Howard Silverblatt, senior index analyst at S&P Dow Jones Indices.

Many financial insiders, however, view the record as a non-event.

“There’s no real excitement on the trading desk,” said Karl Haeling of LBBW. “It’s one of those things that does not mean anything by itself… it’s more a testimony of the importance of Apple on the market.”

Cook has put a focus on digital content and services, positioning Apple to make money from music, movies, apps, subscriptions and more – all sold to the vast “install base” of people using devices made by the company.

Apple has sold more than a billion iPhones since the first model was unveiled by Jobs in 2007. (READ: Smartphone revolution blazes on as the iPhone celebrates 10th anniversary)

The company is in the unique situation of controlling the hardware and software in its mobile devices, with content for users required to go through its App Store that takes a percentage of revenue.

It has moved to keep up with trends in artificial intelligence and voice-commanded smart speakers, facing formidable rivals such as Amazon, Google, and Microsoft.

Apple also boasts the most popular smart watch on the market, playing up features aimed at promoting health and fitness.

Cook has consistently touted innovations in the pipeline at the famously secretive company.

Last month, an ex-Apple engineer was charged with stealing trade secrets from a hush-hush self-driving car technology project days before he quit to go to a Chinese start-up.

“Apple takes confidentiality and the protection of our intellectual property very seriously,” the company said in response to an AFP query about the case.

The suspect was part of a team developing hardware and software for self-driving vehicles, a project that was a “closely-guarded secret,” according to a copy of the criminal complaint.

Apple has been credited with giving rise to lifestyles centered around mobile apps for seemingly everything from games and messaging to ordering food or summoning car rides.

But the phenomenal success of the iPhone led competitors to mirror certain features such as touch-screens featuring rows of colorful icons – and prompted Apple to pursue those competitors in court.

Apple has fought myriad patent battles with rivals, particularly South Korean consumer electronics colossus Samsung, arguing that its product design is as much its intellectual property as are the hardware and software. (READ: Apple and Samsung settle lengthy iPhone patent battle)

In a US regulatory filing this week, Cook warned that tariffs being imposed in a trade war between the US and China could result in Apple paying more to make its products, eating into profit or forcing up prices for consumers.

Cook said during an earnings call that Apple products have not so far been directly affected.

“Our view on tariffs is they show up as a tax on the consumer and wind up resulting in lower economic growth; and sometimes can bring about significant risk of unintended consequence,” Cook said while fielding questions on an earnings call. – Rappler.com