Aug 29, 2018 10:47 AM PHT
Agence France-Presse
Facebook Twitter Copy URL
Copied
A top White House aide suggests some type of regulation may be coming in response to the president's complaints 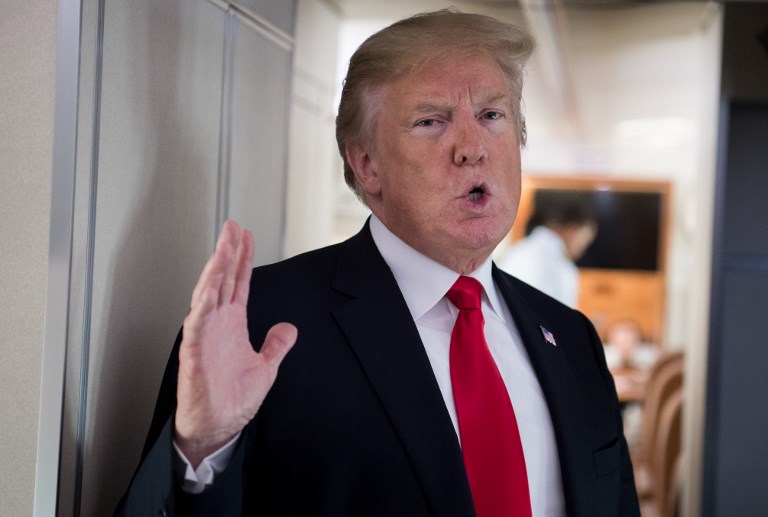 Trump offered no details on what if any actions he might take, but a top White House aide suggested the administration may look at some type of regulation in response to the president’s complaints.

After a pair of early-morning tweets assailing Google, Trump expanded his warnings to other big internet firms in comments to reporters at the White House.

He went on to cite Facebook and Twitter, in an apparent reference to his claims last week of social media suppressing conservative voices.

“You can’t do that to people,” he said. “We have literally thousands and thousands of complaints coming in.”

Trump added: “Google and Twitter and Facebook – they are really treading on very, very troubled territory and they have to be careful.”

In his Twitter comments, the US president complained that Google searches for “Trump news” brought up mostly negative stories about him.

“They have it RIGGED, for me & others, so that almost all stories & news is BAD. Fake CNN is prominent. Republican/Conservative & Fair Media is shut out. Illegal?” he wrote.

According to Trump, “96% of results on ‘Trump News’ are from National Left-Wing Media.”

“Search is not used to set a political agenda and we don’t bias our results toward any political ideology,” it said.

It was not immediately clear what, if any, measures Trump envisioned, but his top economic adviser Larry Kudlow told reporters at the White House that “we’re looking into it” when asked about the claims on Google.

Last week, Trump tweeted that “Social Media is totally discriminating against Republican/Conservative voices” and added “we won’t let that happen.”

The president’s claims on Google appeared to be based on a report from the Trump-friendly news site PJ Media which relied on an analysis chart by conservative news host Sharyl Attkisson that categorized major news outlets such as the New York Times, CBS and CNN as “left wing.”

“Google & others are suppressing voices of Conservatives and hiding information and news that is good,” Trump said.

Google and other internet firms have long faced complaints about search results, which are based on algorithms that can take into account user browsing history, location and other factors.

But technology and media analysts say there is little evidence to suggest Google skews results for political reasons. And if they did, the president would have little recourse under the constitution’s free speech protections.

“Accusations of search engine ‘bias’ have existed as long as there have been search engines. Indeed, search engines are ‘biased’ in the sense that they privilege some information over others,” said Eric Goldman, who heads Santa Clara University’s High Tech Law Institute.

Goldman said that any government attempts to force search engines to display only good news would be a flagrant violation of the Constitution’s First Amendment speech guarantees.

“Any effort by Trump to ‘fix’ search engine results will violate the First Amendment. It’s not even a close question,” Goldman said.

“Instead of yet another @realDonaldTrump conspiracy theory, the simpler explanation is that when @POTUS behaves badly, such as by ripping kids from parents or disrespecting an American hero, most of the free press reports it,” Lieu tweeted.

Nuala O’Connor, president of the Washington-based Center for Democracy & Technology, said that while “algorithmic bias” is a legitimate question, there is no evidence of bias and that it would be worrisome if the government tried to step in with regulations.

“It’s deeply concerning that any government official would try to bring public pressure on a platform over news and information that is important to our democracy,” O’Connor said.

While there is little to suggest that internet firms actively suppress content for political reasons and many conservatives have large online followings, public perception is another matter.