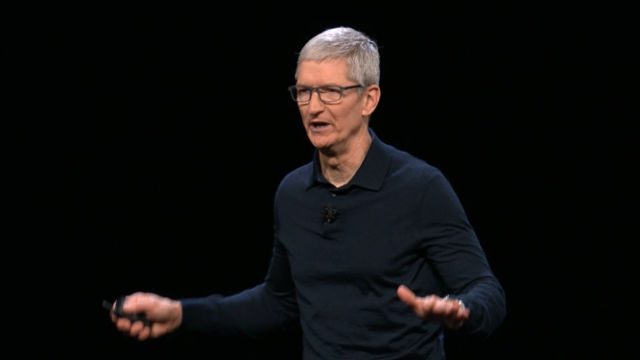 Apple late on Wednesday, January 2, cut its revenue outlook for the latest quarter, citing steeper-than-expected “economic deceleration” in China and emerging markets, factors that have contributed to sharp falls across stock markets since late last year.

The rare revenue warning from Apple pointed to weaker-than-anticipated sales of iPhones and other gadgetry, in part because of trade frictions between Washington and Beijing.

Apple finished down 10%, ending with a market value of just under $675 billion, far from the landmark $1.0 trillion level it reached in August.

“For a while now there’s been an adage in the markets that as long as Apple was doing fine, everyone else would be OK. Therefore, Apple’s rare profits warning is a red flag for market watchers,” noted Neil Wilson, chief market analyst at Markets.com.

“A lot of this is Apple specific (…). But the warning also tells a lot about what is happening on in the broader global economy, specifically China. It tells us that China is experiencing a period of softness,” he added.

“We’re heading to the earning season,” said Adam Sarhan of 50 Park Investments. “The fact that Apple, one of the largest companies in the world, lowers guidance basically means other companies are going to lower it as well.”

White House economist Kevin Hassett said Apple was not alone, telling CNN there were “a heck of a lot of US companies” exposed to the Chinese market that were likely to see earnings downgraded until Washington and Beijing resolved their differences on trade.

Apple’s warning contributed to a rally by the Japanese yen, which tends to benefit from a “flight to safety” when investor anxiety is high.

The yen surged nearly 4% against the dollar before the greenback recovered somewhat.

The Japanese unit also reached a 10-year high against the Australian dollar, which is seen as a bellwether for China.

The Aussie has been battered by slowing growth in China, a key export destination for the country’s commodities sector.

In other corporate news, New York-based pharmaceutical giant Bristol-Myers Squibb announced it would buy US biotech firm Celgene in a $74 billion cash and stock deal to create a specialized biopharmaceutical company.