Facebook Twitter Copy URL
Copied
'League of Legends,' 'Tekken 7,' 'Rules of Survival,' and 'Arena of Valor' are the tourney games

MANILA, Philippines – Local amateur gamers who like competing for prizes and gaming glory have something to look forward to as the Philippine Pro Gaming League (PPGL) returns, bearing with it a P1.3-million prize pool.

LOL and AOV will have the highest cash prizes, with the winning team for each game taking home P200,000. ROS has a top prize of P160,000 while Tekken 7 offers P90,000. LOL and AOV, however, are team games featuring 5-man teams, meaning the P200,000 prize will be split accordingly. ROS and Tekken 7 will likely award the prize to one individual as the organizers have not hinted at any-team based setup for the 2 games.

Here’s a chart of the prizes: 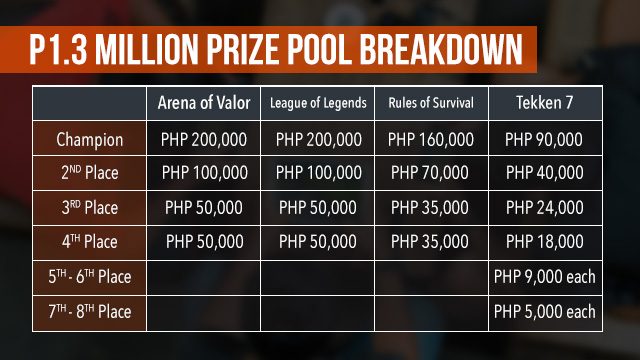 The games will be broadcast in Filipino on the official PPGL Facebook page and in English on the PPGL Twitch channel. The ROS legs will be exclusive to Facebook Live only.

The tournament is organized by MET Events, formerly Mineski Events Team, and Globe Telecom. It is open to amateurs from the Philippines. Click here to go to the official site. – Rappler.com