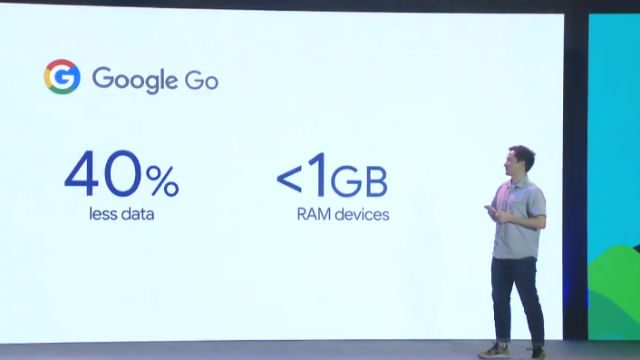 Google Go is an app that has a similar set of functions as Google’s main search function but it has been redesigned to be easier to use and easier to run even on low-performance phones.

The user interface is more visual featuring Instagram-like picture squares that a user can tap on to show search results. The search bar has been equipped with a feature that’s similar to auto-complete functions: type on the search bar, and the app gives you suggestions on top of the search bar that guess what you’re trying to type. (READ: Public WiFi service Google Station to launch this month)

Google’s Simon Tokumine, the group product manager of Google Search, explained that Go is designed to make people type less, seeing that it’s a little harder to type when one is using a phone. “It keeps typing to a minimum,” Tokumine said, “With Google Go, you can explore the web without typing.”

One of the app’s coolest features though is its supposed ability to read web pages for you. Tokumine tried to demo the feature but failed. Humoring the situation, he said that we all could use some better internet, referring to the improving but still flaky internet situation in the country.

Along with convenience features, Google Go is said to be light and efficient too. It’s just a 5-megabyte download, works on a phone with 1 gigabyte of RAM or less, and uses 40% less data than its traditional non-Go counterpart.

Google also mentioned YouTube Go and Android Go, both of which have been available in the Philippines since last year.

As the Go nomenclature indicates, YouTube Go is a YouTube app that is designed to run on less capable phones and uses less data. Android Go, meanwhile, is the light version of Android for low-performance phones. – Rappler.com