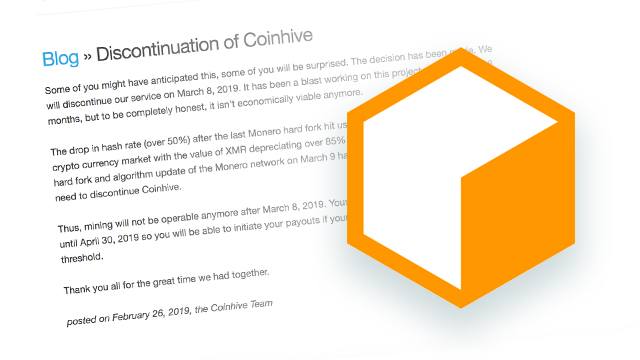 MANILA, Philippines – Coinhive, the in-browser Monero cryptocurrency mining service abused by cybercriminals looking to make a quick buck, will shut down on March 8.

In a statement, Coinhive said it was no longer economically viable to keep Coinhive running. “The drop in hash rate (over 50%) after the last Monero hard fork hit us hard. So did the ‘crash’ of the cryptocurrency market with the value of XMR depreciating over 85% within a year.”

These factors, along with “the announced hard fork and algorithm update of the Monero network on March 9,” led the service to discontinue operations.

All Monero mining operations will cease working after March 8, while users can still cash out using their dashboards until April 30 – if their balance is above the payout minimum.

Coinhive was commonly associated with a practice known as drive-by mining or cryptojacking, in which cybercriminals would hack unsuspecting websites, site plugins, and other files, then leave Coinhive code connected to their accounts on hacked sites.

Cryptojacking rose significantly in 2018 partly due to the popularity and relative ease with which Coinhive and other such miners could be used on computers and phones. – Rappler.com