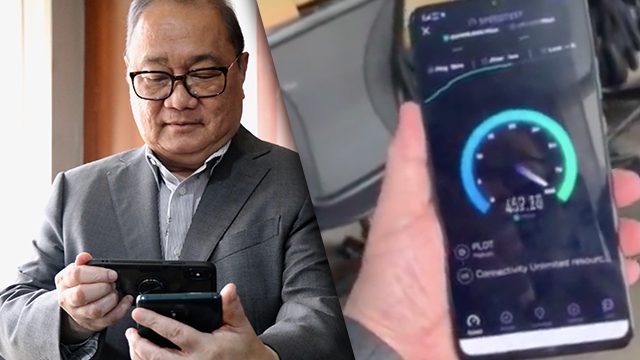 Facebook Twitter Copy URL
Copied
After online gaffe, the CEO gets back at netizens with photo and video proof

MANILA, Philippines – PLDT CEO Manny Pangilinan had a little, online gaffe last Tuesday night, May 7, posting about using a 5G Huawei phone “now” but the post showed he had tweeted from an iPhone.

Netizens, of course, had a field day with it, with replies ranging from harmless, humorous ones to more serious insults. What may have happened, as also suggested by some users, is that he indeed was using the 5G Huawei phone, and then simply used his personal iPhone to tweet.

If they had been testing the speeds of their 5G network on a test phone, it’s likely the executive didn’t bother to log in on the test phone, instead switching to his personal iPhone. Likely, he also hadn’t been aware or at least had forgotten that Twitter apps show which device the tweet came from. (READ: PLDT on the Huawei question)

It was contextual information that transformed what would’ve been a harmless tweet – which was basically, “check it out, I’ve got a 5G phone, and boy let me tell you, it is fast” – to something that could be interpreted as him being untruthful.

We emailed PLDT to tell us their version of the story but didn’t receive a definitive reply.

Instead, about 18 hours after the fact, Pangilinan tweets a video of the said 5G phone with a speed test being performed on the Ookla Speed Test app, reaching speeds of above 400 megabits per second (Mbps). (READ: Globe to pilot 5G in June 2019)

For context, Smart advertises its 4G to top out at 42 Mbps. It’s a tweet telling all the disbelievers, “well, I have the video to prove it.” The phone may be the 5G version of the Huawei Mate 20 X, given the size and the waterdrop notch. (READ: Here are all the 5G phones we saw at MWC 2019)

Simultaneously, the PLDT account on Twitter posted a photo of Pangilinan taking a picture of the 5G phone using what looks like an iPhone Xs Max.

Pangilinan’s not the first high-profile personality to experience phone mix-ups. US President Donald Trump in October 2018 refuted a New York Times story about his not sticking to government-issued phones with a tweet that came from an iPhone. In March 2019, detained Huawei CFO Meng Wanzhou was reported to have been found with several Apple devices including an iPhone during her arrest. – Rappler.com