What Microsoft announced at its Xbox E3 2019 briefing MANILA, Philippines – Microsoft released a slew of game trailers ahead of its E3 2019 Xbox briefing on its YouTube channel, showcasing some hotly anticipated games as part of its slate, but what exactly is the company going to show off during its press briefing?

Find out more as we go through the reveals for this year’s event.

60 games
Including 14 games from Xbox Game Studios
Over 30 launches on Xbox Game Pass
See what’s next for Xbox Game Studios
Expansive plans for streaming
More about our next console #XboxE3https://t.co/8Nrh4tQvhb pic.twitter.com/cehIPpdfJQ

Starting off with a trailer for The Outer Worlds, this was followed by Ninja Theory’s Rhani Tucker and Don Matthews taking the stage to announce a multiplayer melee combat game called Bleeding Edge. Bleeding Edge’s alpha is slated to arrive in a few weeks.

This was followed by trailers for Star Wars: Jedi Fallen Order, Ori and the WIll of the Wisps, and Minecraft Dungeons, which appears to be a multiplayer hack-and-slash game in the Minecraft aesthetic slated for a 2020 release.

Minecraft Dungeons, an all-new action-adventure game from the creators of Minecraft, is coming in spring 2020! #XboxE3https://t.co/8Nrh4tQvhb pic.twitter.com/Doju4IpDa8

This was followed by trailers for Blair Witch, Battletoads, and Cyberpunk 2077

Oh, and this Cyberpunk 2077 trailer had a cameo from Keanu Reeves. Reeves himself went onstage to hype up the crowd and reveal the April 16, 2020 release date for the game. 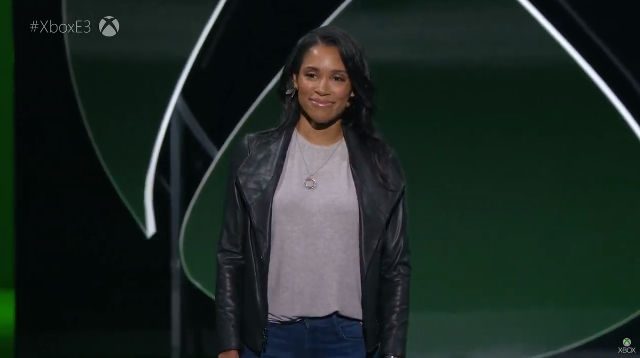 She added the PC version of Game Pass would go live today with plenty of available titles in store. Check it out below.

There is also ann ultimate version of the game pass.

Experience Colorado like (hopefully) never before in Wasteland 3. #XboxE3https://t.co/UGEF7Rqs0K pic.twitter.com/RjshRx4LsM Double Fine Productions, meanwhile, is announced as a new Xbox game studio, and Tim Schafer goes on stage to reveal a new trailer for Psychonauts 2.

This is followed by trailers for Lego Star Wars: The Skywalker Saga,Dragon Ball Z: Kakarot, 12 Minutes, and Way to the Woods. Kakarot is slated for an early 2020 release. It's time to bust some hives. Get ready for Escape, an aggressive 3 player co-op experience. #Gears5 #XboxE3https://t.co/6iRXencfGb pic.twitter.com/S0BotK92tS

Microsoft is also coming out with a new version of the Xbox Elite Controller, called the Series 2.

Re-engineered from the inside out with over 30 ways to play like a pro. #XboxE3https://t.co/8Nrh4tQvhb pic.twitter.com/EdFPbuN7S5

Dying Light 2 was announced for a Spring 2020 release., while Forza Horizon 4 will be getting a Lego Speed Champions expansion which is launching this week. State of Decay 2, meanwhile would be getting an expansion called Heartland. Sega revealed Phantasy Star Online 2 was coming to Xbox One as a free-to-play title, while Smilegate showed off Crossfire X for the console as well. Namco Bandai also showed off its trailer for a new Tales game, called Tales of Arise, while Elden Ring is a From Software title (produced by Namco Bandai) taking world-building from George R.R. Martin to games in a non-Game of Thrones fashion.

With Console Streaming from your Xbox One you'll be able to:

Where you play is entirely your choice. Going into preview in October. #XboxE3 pic.twitter.com/TmszGgBk21 Finally, Project Scarlett, Microsoft’s new console, will be sporting a custom AMD processor 4 times more powerful than the Xbox One’s. It will launch in 2020 with Halo Infinite in tow.