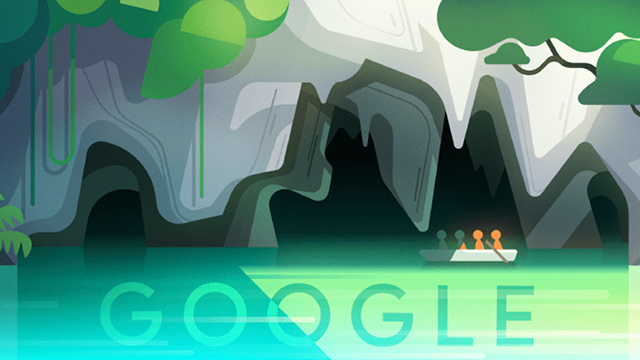 On Sunday, June 30, Google users can see an illustration of the subterranean river by artist David Lu on the search engine’s homepage.

On this day in 2012, the Puerto Princesa Underground River became a protected site by the Ramsar Convention on Wetlands. It’s also a Philippines National Park and a UNESCO World Heritage Site.

Ramsar, an international body created for the conservation of wetlands, said the river is “unique in the biogeographic region because it connects a range of important ecosystems from the mountain-to-the-sea, including a limestone karst landscape with a complex cave system, mangrove forests, lowland evergreen tropical rainforests, and freshwater swamps.” (READ: Underground river recognized as wonder of nature)

The 8.2-kilometer underground waterway is one of the longest in the world and, as it flows into the ocean, is the largest subterranean estuary in the world.

It’s home to 800 plant species and animals that can be found nowhere else, including the endangered Philippine cockatoo, the Hawksbill turtle, the endangered Green sea turtle, and Nordmann’s greenshank. They are joined by giant spiders, crabs, fish, snakes, bats, and swallows that can only be found in the river’s habitat.

The Puerto Princesa river also has fossils dating back millions of years.

Google has made a number of Doodles featuring the Philippines in the past, to celebrate holidays like Independence Day, special days like the 2016 presidential elections, and birthdays of famous personalities like national hero Jose Rizal and national scientist Fe del Mundo.