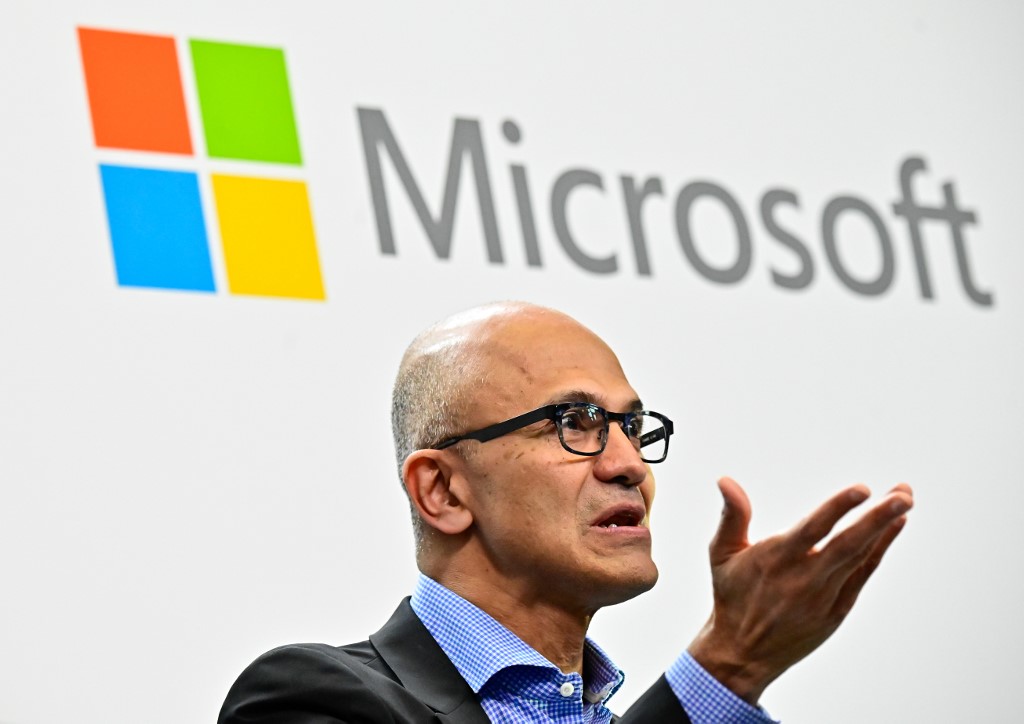 The US technology titan, shifting in recent years to business services from consumer tech, reported its net income rose 49% to $13.2 billion on revenue that was up 12% to $33.7 billion.

Microsoft’s profit in the fiscal fourth quarter that ended June 30 was helped by a $2.6 billion tax benefit, according to the company.

Chief executive Satya Nadella said the results closed out a record fiscal year for the tech giant, which has the largest market value of any company at more than $1 trillion.

“It was a record fiscal year for Microsoft, a result of our deep partnerships with leading companies in every industry,” said Nadella.

“Every day, we work alongside our customers to help them build their own digital capability…This commitment to our customers’ success is resulting in larger, multi-year commercial cloud agreements and growing momentum across every layer of our technology stack.”

Net income for the fiscal year more than doubled to $39.2 billion on revenue that was up 14% to $125.8 billion, according to the earnings report.

Microsoft shares rose 1.4% to $138.35 in after-market trading that followed release of the earnings figures.

“Microsoft is firing on all cylinders now, growing big in growing markets, and even managing growth in mature markets like PCs (personal computers),” said technology analyst Patrick Moorhead of Moor Insights and Strategy

The Redmond-based company is “cementing its spot” as a provider of software, infrastructure and platforms hosted as services in the internet cloud, according to Moorhead.

Microsoft reported growth across all it businesses except Xbox gaming unit where revenue declined 10%.

A reason is likely that the latest generation Xbox console that debuted nearly six years ago is getting “long in the tooth,” with a successor on the horizon, Moorhead said.

Microsoft in June gave the world a first glimpse of a powerful next-generation Xbox that it aims to release late next year.

Xbox head Phil Spencer pulled back the curtain on “Project Scarlett,” a successor to the Xbox One that will give game makers “the power they need to bring their creative visions to life.”

The new Xbox was promised to be released in time for the Christmas holiday shopping season in 2020.

Xbox battles in the console gaming arena with Sony, which is working on a new generation PlayStation.

The commitment to consoles by longtime contenders in the market comes with the rise of video games hosted as subscription services streamed Netflix-style from data centers in the internet cloud, which plays to Microsoft’s cloud and Xbox strengths.

Revenue from productivity and business processes division that includes business and consumer cloud services as well as career-focused social network LinkedIn was up 14% to $11 billion, according to the earnings report.

Money taken in at LinkedIn jumped 25% with the service seeing record levels of engagement, Microsoft said.

Surface revenue growth was “surprising” considering the overall personal computer market was flat, according to Moorhead.

“This quarter was an absolute ‘blow out quarter’ across the board with no blemishes and in our opinion speaks to an inflection point in deal flow as more enterprises pick Redmond for the cloud,” Wedbush analyst Daniel Ives said in a note to investors, referring to Microsoft’s headquarters in Washington State.

“While the stock has been very strong and a trillion dollar market cap is now reached, we believe the cloud party is just getting started in Redmond.” – Rappler.com