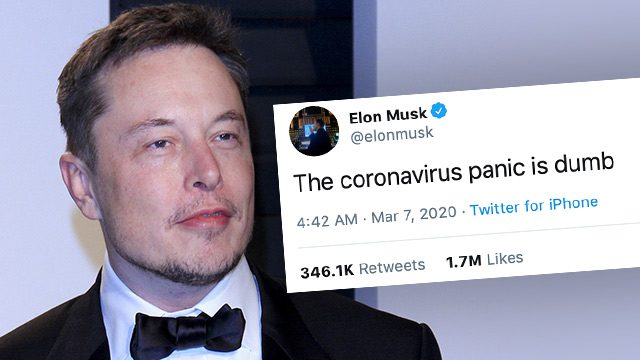 The coronavirus panic is dumb

The ploy, if it had been to demand attention, worked. It reaped 1.7 million likes in the 4 days after the March 7 posting.

As expected, the tweet drew sharp criticism, specifically of the tweet’s perceived insensitivity to those who have contracted it and high-risk candidates.

As someone with severe heart issues, I find this tweet irresponsible. Just because you are one of the richest people in America who has every opportunity, some like me can & will die like the other 20 Americans who have died. Shame on you

Elon this is not a good tweet. People are still not taking proper steps.

You are a man of science. Can I set up a call with some scientists to help change your mind?

With exponential functions you want to err on the side of caution.

Some perceived it as Elon being “edgy”:

Is it super edgy to not give a fuck about kids with asthma and elderly people now? I didn’t get the memo.

Still, quite a few appear to empathize with the controversial tech executive.

Some took pleasure in reminding Musk of his older Twitter gaffes, specifically the one which led to a securities fraud case:

Not nearly as dumb as committing securities fraud on Twitterhttps://t.co/DM6sOXN5Xg

Musk is a known stirrer of controversy on Twitter, and had been involved in another legal case when he called British diver Vernon Unsworth – one of the rescuers of the Thai boys football team that got trapped in a cave in 2018 –  a “pedo guy” on Twitter.

Musk’s Tesla stores and factories in China were also earlier temporarily shuttered because of the virus. – Rappler.com