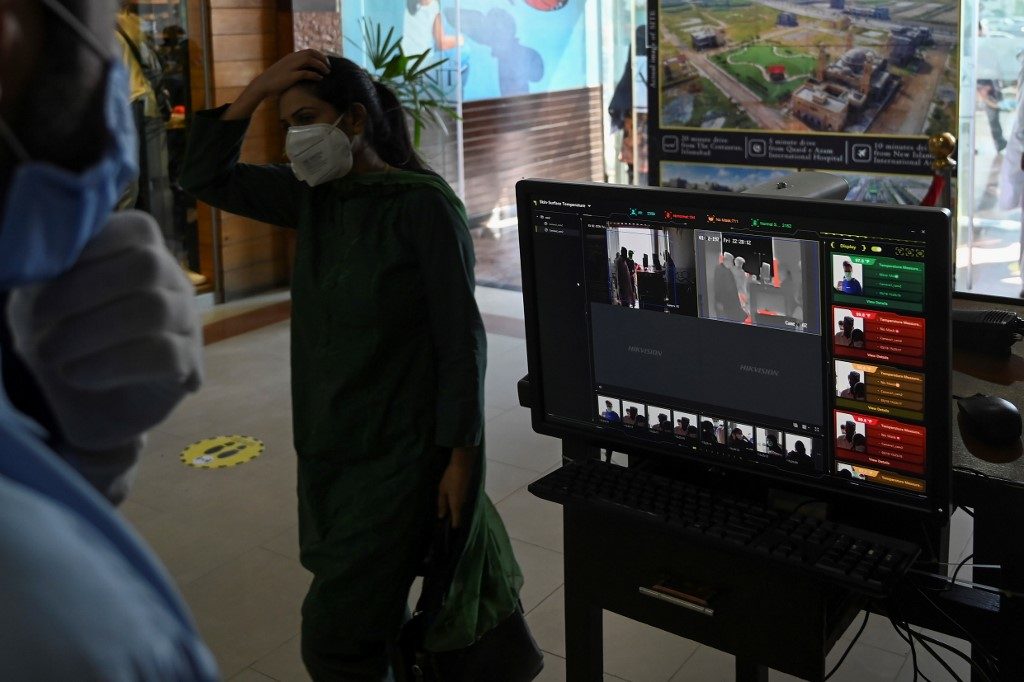 Facebook Twitter Copy URL
Copied
Details about the project have not been released, but two officials say intelligence services are using geo-fencing and phone-monitoring systems ordinarily used to hunt high-value targets including homegrown and foreign militants

ISLAMABAD, Pakistan – Pakistan’s intelligence services are deploying secretive surveillance technology normally used to locate militants to instead track coronavirus patients and the people they come into contact with.

In a program publicly touted by Prime Minister Imran Khan, the government has turned to the powerful Inter-Services Intelligence agency (ISI) for help in tackling the virus, which still is spreading at an accelerating rate across Pakistan.

Details about the project have not been released, but two officials told AFP that intelligence services are using geo-fencing and phone-monitoring systems that ordinarily are employed to hunt high-value targets including homegrown and foreign militants.

A lack of awareness, stigma and fear have contributed to some people with symptoms not seeking treatment or even fleeing hospitals, while others who’ve had contact with virus patients have flouted self-isolation rules.

Speaking on condition of anonymity, a senior security official told AFP that agencies are now “quite effectively” using the technology to track coronavirus cases.

“The government has been successful in tracing even those who tested positive but went into hiding,” the security official said.

Geo-fencing, a discreet tracking system that alerts authorities when someone leaves a specific geographic area, has helped officials monitor neighbourhoods on lockdown.

Authorities are also listening in to the calls of COVID-19 patients to monitor whether their contacts are talking about having symptoms.

“The trace-and-track system basically helps us track the mobile phones of corona patients as well as anyone they get in touch with before of after their disappearance,” an intelligence official said.

Khan recently praised the program, which has come up against little public debate or scrutiny over its use in the virus fight.

“It was originally used against terrorism, but now it is has come in useful against coronavirus,” he said.

Nearly 60,000 people in Pakistan have tested positive for the disease and more than 1,200 patients have died.

But with testing still limited, officials worry the true numbers are much higher. (READ: IMF approves $1.4 billion in coronavirus aid to Pakistan)

Pakistan’s intelligence services and military hold vast sway over many aspects of cultural and political life, with the US and India accusing Islamabad of backing insurgents fighting in Kashmir and Afghanistan – claims denied by officials.

Leading rights activist and ex-senator Afrasiab Khattak told AFP that involving the ISI would spread unnecessary fear among the population.

“The task of tracking and tracing the patients and suspected cases should be dealt with by provincial governments and local communities – let intelligence agencies do their actual job,” he said.

Countries across the world have employed track-and-trace methods to control the virus’s spread, raising privacy concerns.

In Pakistan, authorities struggled to present a cohesive national strategy to control the coronavirus. Khan was reluctant to call for a sweeping lockdown, arguing the impoverished country could not afford it.

He also largely caved to pressure from Pakistan’s powerful religious lobby, which pushed back against the closure of mosques.

Many Pakistanis have simply ignored provincial lockdown orders and Khan has allowed businesses to reopen in phases, citing the economic impact on daily wage earners. – Rappler.com