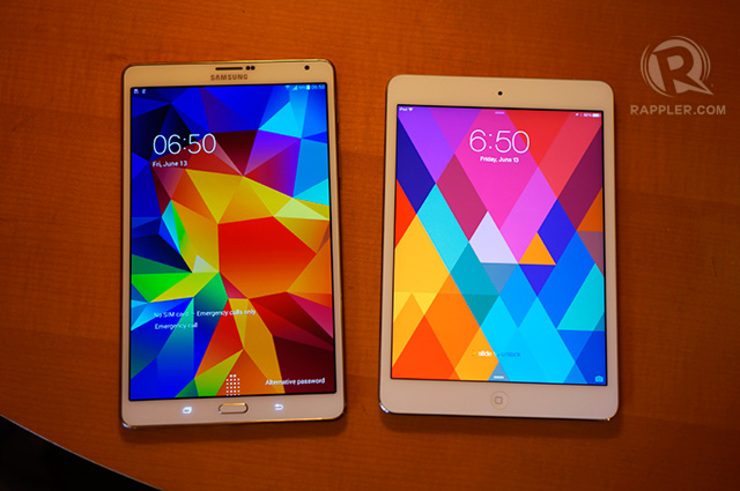 Facebook Twitter Copy URL
Copied
Samsung's new premium tablet is thinner and lighter than the iPad, with a better screen and a fingerprint scanner

MANILA, Philippines – Six months after it unveiled its Pro tablet line at the 2014 Consumer Electronics Show (CES) in Las Vegas, Samsung has one more new lineup of tablets to unveil this year – the Galaxy Tab S.

To denote that this is a flagship device Samsung borrows the S from its flagship line of smartphones (i.e. Galaxy S5) but in a move that’s a bit confusing. One would think that the Tab Pro is the most premium of its tablets but this is not the case.

Samsung hopes to differentiate its product line more clearly with 3 levels starting with the entry level Galaxy Tab series (currently on its 4th iteration), its business/productivity line the Galaxy Tab Pro and then its high-end Galaxy Tab S line. The Tab S is available in two sizes 8.4 inches and 10.5 inches featuring the same dimpled faux leather back as the Galaxy S5.  It comes in two colors: titanium bronze and dazzling white. The 8.4-inch model will also come in glam red. We got hands-on time with both the white and titanium models.

The white tab has an iridescent sheen to it, while the titanium tab has a more metallic look. Both devices have an accent color – the sides are actually rose gold. The understated brushed metal band is what the band on the Galaxy S5 should have looked like.

The Tab S tells us all is not lost for Samsung. In the looks department this device is the most refined “modern glam” device we seen from them yet. Both devices are the thinnest and lightest tablets Samsung has ever made. They both measure 6.6mm thick and weigh 465g and 294g respectively. It’s a weight difference you can really feel. The 8.4-inch model is thinner and lighter than my Retina iPad mini.

One compromise is that you can no longer remove the back plate – meaning no user-replaceable battery. The SIM card slot and Micro SD slot on the LTE models have been moved to the right hand side of the device. The volume rocker and power buttons are also on the right on the 8.4 inch model and on top of the device on the 10.5 inch model.

Both devices come with IR blasters that allow them to be used as TV remotes. You’ll notice two circles on the back of both devices used to attach new book covers (an optional accessory). The Book Covers are also designed to look and feel premium. When attached they can be fashioned 3 different ways, varying the angle of the display. Samsung is also offering a bluetooth keyboard/cover and another less bulky cover.

Of course the biggest feature of the Tab S is its new Super AMOLED display. Samsung’s current lineup of tablets have LCD TFT displays. AMOLED displays are more superior – side by side with the Tab Pro you’ll notice images have richer contrast, are more vibrant and have darker blacks. Most users will love the extra punch. This is more evident when compared side-by-side with last January’s Tab Pro models and even the Retina iPad mini.

The LTE variants come with a messaging app for text messaging and can accept phone calls. I like how Samsung didn’t take away this functionality, after all you have a SIM card for data why not give users the option to call and text if needed.

Software-wise the Tab S runs on Android 4.4.2 KitKat with the same version of TouchWiz found on the S5. You’ll also get Samsung’s tablet-only Magazine UI  – a Flipboard-style customizable set of tiles that you can flip through on the home screen.

Some of our favorite software features of the S5 have also been carried over including Ultra Power Saving Mode, Download Booster and Private Mode. Ultra Power Saving Mode dramatically improves the battery life on your device. We turned it on at 95% and got an extra 11.8 days of extended battery life. Download Booster combines WiFi and LTE connectivity to improve the speeds of downloads while Private Mode allows you to hide photos, videos and music.

A new setting called Adaptive Display adjusts the display depending on your environment. While a new feature called Side Sync (previously only available on Ativ notebooks) lets you access and control your Galaxy Smartphone from the Tab S. Pretty nifty if you have work to do on the tab and don’t want to have to carry you phone with you. You’ll still be able to access all the apps on your phone, send messages and answer phone calls.

Interested in getting the latest Samsung devices? Enjoy more savings as you purchase them with coupon codes and other promos. Click here to find out more.