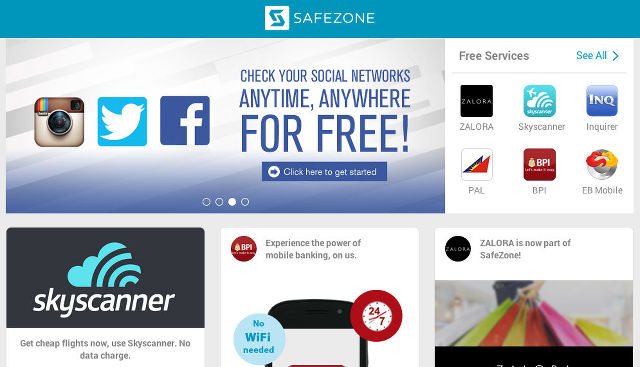 MANILA, Philippines – PLDT launched a new way for Filipinos using Smart, Sun, and Talk N’ Text to get a number of services and apps on their phone without incurring data charges on Thursday, February 26.

The Safezone service will have the following apps available now or in the near future, either for Android or iOS devices:

Of the initiative to join Safezone, Maria Ressa, Rappler president, said, “Filipinos will connect to the Internet for free and access information and context about important events right at their fingertips.”

She added: “Rappler works tirelessly on all initiatives that make this happen. This is how we see our ground-breaking stories and advocacies further inspire smart conversation, community engagement and digitally-fueled actions for social change.”

Benjie Fernandez, chief operating officer of PLDT’s Voyager Technologies, said Safezone was a way to better reach out to consumers from their mobile phones.

“With growing smartphone penetration in the Philippines, more users are now accessing online services via their mobile phones. This presents an opportunity for businesses to reach out to their customers wherever they are through their smartphones, and be closer to them than ever before,” he said. – Rappler.com