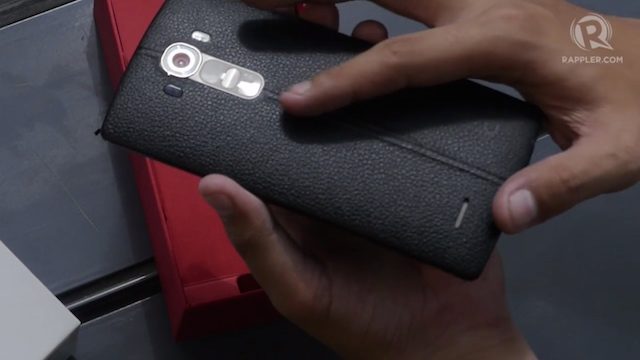 We got our hands on LG’s flagship smartphone, the G4, and here’s what we think of it.

Let’s get started on the exterior.
The first thing you notice fresh off the box is the G4’s leather casing.
It gives a touch of luxury to what may otherwise be just another smartphone.
Leather complements a metal front panel more than it would plastic.
The G4 is bigger than the standard Android smartphone.
Slightly smaller than the Samsung Note 4, but bigger than the S6.
It might be a tad too big for those with dainty hands.
It is lightweight, but not the most pocket-friendly smartphone around.
It took us a while to find the power button, but when we found it, we were pleasantly surprised.
It is located at the rear center, discreetly nestled between the volume buttons right below the camera.
The screen is superb, with sharp, crisp colors and images.
Elements on the screen occupy a sizable real estate – a boon to those with vision problems.
Swiping apps and widgets is smooth and snappy.
The camera works well in broad daylight and lowlight.
Selfie takers will like the beauty slider function.
Just slide and there you have it! Flawless, glowing skin in an instant.
Hardcore Android users may fall in love with this phone and guess what, we think it’s worth the try.
If you are an iPhone user, the LG G4 might make you want to consider getting an Android.
It’s a workhorse with its great battery power, superb screen quality, and snappy, responsive user interface.
But given the latest iOS updates announced during Apple’s Worldwide Developer Conference, the G4’s features, such as the dual screen function and energy conservation mode will be coming to an iDevice in the fall.
Matthew Ang, Rappler, Manila. – Rappler.com