Reddit CEO apologizes as calls for her resignation grow In a post, Pao acknowledged that the company “screwed up.”

Pao expounded, “Not just on July 2, but also over the past several years. We haven’t communicated well, and we have surprised moderators and the community with big changes.”

She added that despite apologizing and making promises over the years, Reddit has not delivered on those promises, and it has broken the trust Redditors have had with the staff behind the site.

A petition on Change.org for Pao to resign, however, is also gaining traction with around 198,000 signatures at the moment.

The Change.org petition mentions that Reddit is being run into the ground due to Pao seemingly instituting “a new age of censorship.”

On Pao’s apology post, Redditors poured out their particular concerns with Pao’s handling of both the past week’s debacle and the running of the affairs of one of the world’s most popular websites, including the appointment of a Moderator Advocate who would act as a liaison between Reddit and Reddit’s volunteer moderators.

Some of the comments were pieces of advice from CEOs of other companies, such as this comment from SlickDealsCEO: 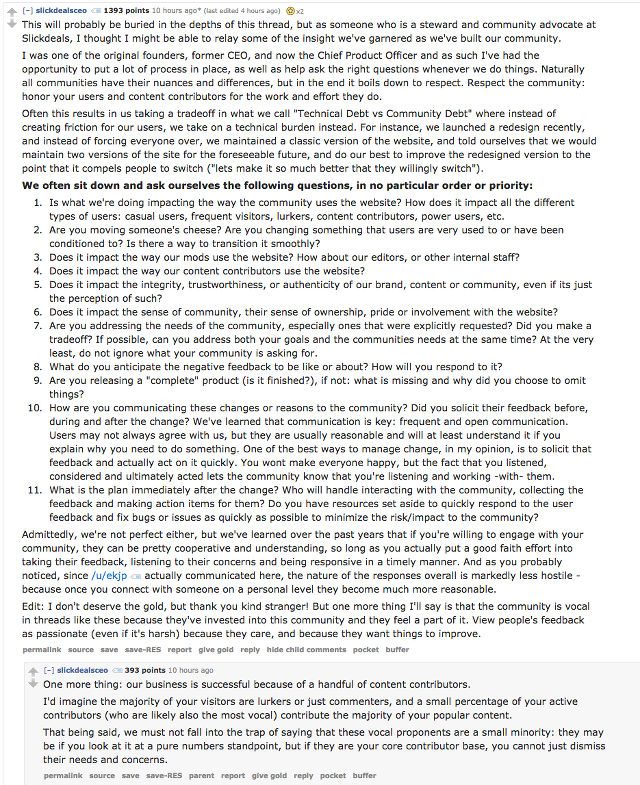 Another comment took the point of view of an average user, pointing out the issues that were important for non-moderators who trust the site for content: While it will likely take a while for things to resolve themselves, here’s to hoping none of these developments end up becoming idle promises. – Rappler.com