“The Philippine cyber-political divide: Political polarization on Twitter amid 2022 Philippine presidential elections” is a study presented by the author in the second #FactsFirstPH research briefing held on March 18, 2022. The full copy of the research is reposted with permission.

The spread of information (including disinformation) has been extensively studied, especially given the proliferation of “fake news” and how they have since impacted election outcomes. 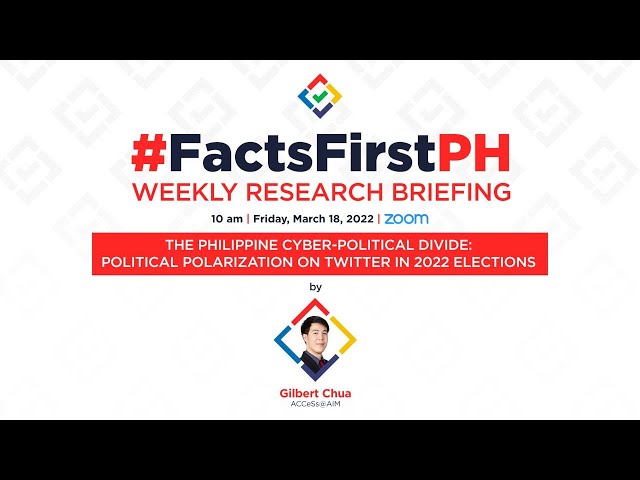 In this study, we were interested in seeing how Twitter users interact with hashtags related to Philippine elections. Here, “interaction” looks beyond the use of the hashtags and also examines how users retweet or respond to a tweet containing hashtags of interest.

In the United States, studies have suggested that social media users who report hating political opponents are – according to political science researchers from Aarhus University – also the ones “most likely to share political fake news and selectively share content that is useful for derogating these opponents.”

These findings agree with the results of two studies done in 2019 with the first one showing that the sharing of fake news was most prevalent among conservative voters and the second one reporting that pro-Trump supporters were more likely to share fake news. These are important and very relevant studies as they were conducted under the lens of fake news in the context of national elections – specifically the election of a president.

We studied Twitter data containing nearly 450,000 tweets with topics (phrases or hashtags) that trended from October 1, 2021, to March 12, 2022. Trending topics were chosen from the 10 highest rated topics or hashtags (on Twitter) in the Philippines for every hour of the same period. These topics were made visible to Twitter users, highlighting them on each user’s “trending” list.

In addition to assigning topics to candidates, each candidate-related hashtag was also given a polarity of being either positive or negative, depending on whether the hashtag was promoting the candidate or attacking them, respectively.

Based on the polarity of topics, two parties exhibited polarization explicitly – the parties of Vice President Leni Robredo and of ex-senator Ferdinand Marcos Jr. It is the accounts of those that tweeted the most about these candidates that this study focused on.

To estimate each account’s level of support for a candidate, we identified the net number of positive tweets it made for each candidate. If an account tweeted about the topics “#Kakampink” 5 times (positive for Robredo), “#LeniDuwag” 3 times (negative for Robredo), and “#LabanMarcos” and “#BringBackMarcos” a total of 5 times (positive for Marcos), then that account was tagged as being a Ferdinand Marcos Jr.-oriented (net_mjr) account since it had shown the greatest interest toward Marcos. From these, we were able to identify the accounts that were net_leni, net_isko, net_mjr, net_ping, and net_pacquiao.

Looking at Figure 1, we found the greatest changes to be in the topics mentioning Ferdinand Marcos Jr. negatively and those that mentioned Leni Robredo among all users since January 1, 2022.

Breaking down the trends by the account’s orientation, we saw that net_leni accounts were the ones largely responsible for the negative tweets related to Ferdinand Marcos Jr. We also noticed a very sharp uptrend in the number of tweets by net_leni accounts starting March 3, 2022.

It is interesting to note that based on the trends for net_mjr accounts, there was a noticeable increase in the number of their tweets that mentioned Leni Robredo.

This highlights one of the limitations of the tagging methodology as it is likely that the tweets from accounts oriented towards Ferdinand Marcos Jr. and which mentioned Leni Robredo were truly negative instead of being neutral or positive.

An account was considered part of this network when it either quoted or had been quoted by another account, resulting in a tweet or message becoming part of the top 10 trending topics.

This quoting behavior captured the spread of content between accounts as new accounts built on existing tweets and either passed on or modified their message.

We found that an overwhelming majority of public accounts that quoted users and tweeted about trending election-related topics tweeted about Leni Robredo more than other candidates. This can be seen in Figure 4 where there is an exceptionally large number of pink accounts in the middle. However, we can clearly see the presence of another cluster of users that quote one another.

Red accounts that tweeted positively about Ferdinand Marcos Jr. can be found in the cluster on the right. What is interesting to note is that within the secondary cluster, there were many accounts that still tweeted about Leni Robredo – attributed to those simply mentioning the topic “Leni” rather than any of the other positive hashtags related to Leni Robredo.

This shows that those who discussed the topic “Leni” and did not use positive hashtags for Leni Robredo tended to quote and be quoted by net_mjr supporters. To examine echo chamber-like behavior, we looked at each set of accounts corresponding to net_leni and net_mjr accounts.

Inspection of ~2,500 accounts grouped into the red cluster and tagged as net_leni, showed there were accounts that tweeted only negatively about Leni Robredo without tweeting about topics related to other candidates. This means that some net_leni accounts are actually supporters of Ferdinand Marcos Jr. yet they tweet more negative things about Leni Robredo than positive things about their own candidate. The activity of net_mjr accounts tends to be made of two big components – negative campaigning against Leni and positive tweeting about Ferdinand Marcos Jr.

These results imply the need for more sophisticated ways to analyze tweets – specifically looking at how these accounts interact with one another. Methodologies that will analyze the polarity of individual tweets relative to personalities need to be refined further for us to better understand the dynamics at play in cyber, political, and social spaces among Filipinos.

Previous studies in the United States have shown that political polarization plays a critical role in the spread of “fake news” and the proliferation of disinformation.

We found that each faction varies in both number and behavior. In terms of tweeting about negative topics, those that tweet mostly about Ferdinand Marcos Jr. tend to exhibit more negativity. Accounts that tweet about Leni Robredo mostly tend to quote and be quoted almost exclusively by others like them about the same topics.

Further research is needed to improve our understanding of all these interactions and pin down how disinformation spreads in this type of a politically polarized environment in the Philippines. – Rappler.com

Gilbert Chua is a PhD in Data Science Student in the Asian Institute of Management and an honorary member of the Analytics, Computing, and Complex Systems laboratory (ACCeSs@AIM). He is interested in delving deep into the workings of social systems through the lens of machine learning, graph theory, and complexity.