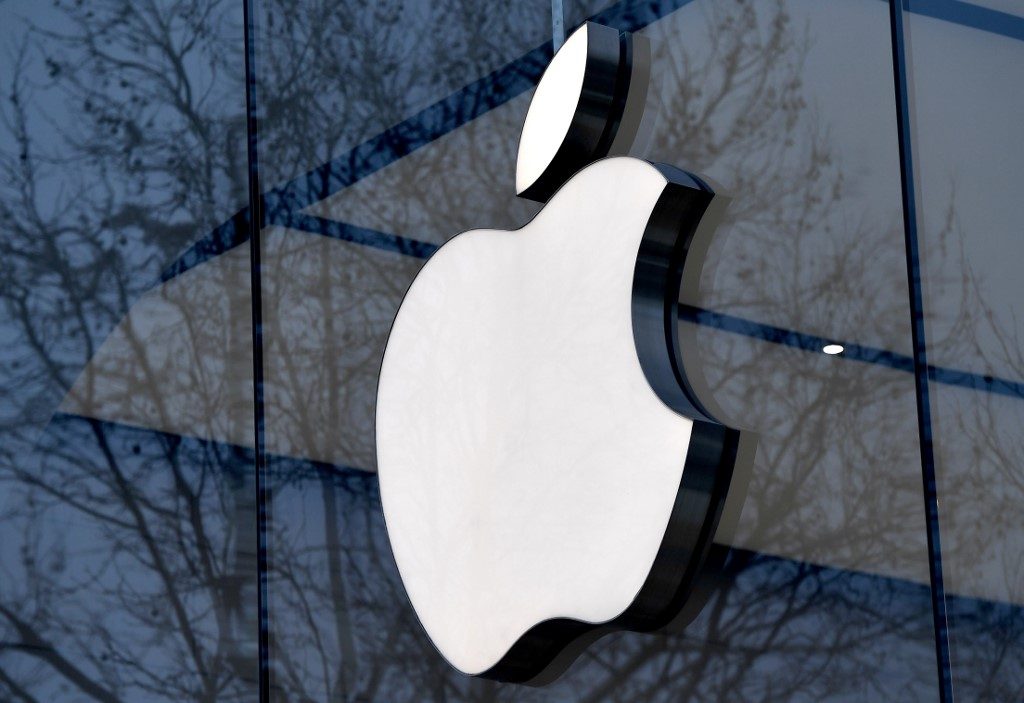 APPLE. This file photograph taken on February 8, 2018, shows the logo of the US multinational technology company Apple on display on the facade of a company store in Brussels. Photo by Emmanuel Dunand/AFP

Facebook Twitter Copy URL
Copied
The clear cut decision by the EU's general court could now face another appeal at the top European Court of Justice, with a decision expected no earlier than 2021, but Vestager initially says Brussels is studying the judgement.

A European court on Wednesday, July 15, annulled an EU order that Apple repay Ireland 13 billion euros ($15 billion) in back taxes, in a major legal setback for Brussels.

The commission’s historic ruling against Apple was delivered in August 2016 by Competition Commissioner Margrethe Vestager in a shock decision that put Europe on the map as a scourge of Silicon Valley.

The iPhone-maker and Ireland had appealed the order, which Apple CEO Tim Cook slammed at the time as “total political crap”.

Vestager was derided as Europe’s “tax lady” by US President Donald Trump because of the case, as well as a series of antitrust fines she imposed on Google.

The clear cut decision by the EU’s general court could now face another appeal at the top European Court of Justice, with a decision expected no earlier than 2021, but Vestager initially said only that Brussels was studying the judgement.

The EU in 2016 accused Ireland of allowing Apple to park revenue earned in Europe, Africa, the Middle East and India and sparing it almost any taxation.

Brussels said this gave Apple an advantage over other companies, allowing it to avoid Irish taxes between 2003 and 2014 of around 13 billion euros ($14 billion).

But the EU court said the commission “did not succeed in showing the requisite legal standard that there was an advantage”.

The commission “was wrong” to declare that Apple units based in Ireland “had been granted a selective economic advantage and, by extension, state aid.”

Apple welcomed the decision and reiterated that the profits in question were always intended to go to the United States and not Ireland.

“This case was not about how much tax we pay, but where we are required to pay it,” an Apple spokesman said in an email to AFP.

“We’re proud to be the largest taxpayer in the world as we know the important role tax payments play in society,” Apple added.

The government said it had “always been clear” Apple received no special treatment, adding: “The correct amount of Irish tax was charged… in line with normal Irish taxation rules.”

Vestager said the EU would “carefully study the judgement and reflect on possible next steps,” which could include an appeal.

“The Commission stands fully behind the objective that all companies should pay their fair share of tax,” she added.

Some observers have expressed doubts on the Apple case, wondering whether the EU was right to use antitrust law to crack down on tax optimisation strategies by multinationals.

In similar cases, the same EU court struck down an order by Brussels that Starbucks pay 30 million euros in back taxes to the Netherlands.

In a separate decision, however, it said Fiat must pay roughly the same amount to Luxembourg.

The case comes as the EU is trying to come up with ways to better ensnare digital giants to pay taxes where they do business, though this has been opposed by some European capitals.

“Today’s court decision illustrates how difficult it is to use EU state aid rules to collect tax,” said Tove Ryding, tax expert at the European Network on Debt and Development.

“If we had a proper corporate tax system, we wouldn’t need long court cases to find out whether it is legal for multinational corporations to pay less than one percent in taxes,” she said.

Talks to come up with a new global tax system at the OECD have been stalled due to opposition by the US.

The Apple decision came on the eve of another landmark case at the EU courts, this one a lawsuit brought by an Austrian activist against Facebook over data privacy. – Rappler.com