WASHINGTON, USA – Facebook's Sheryl Sandberg and Twitter's Jack Dorsey told lawmakers on Wednesday that they are better prepared to combat foreign interference on their platforms, even as Democrats and Republicans alike expressed doubts that the social media giants had fully cleaned them up ahead of the midterm elections.

Sandberg, the chief operating officer of Facebook, and Dorsey, the leader of Twitter, conveyed their message in front of the Senate Intelligence Committee, almost a year after their companies told the same panel of lawmakers that Russia used inauthentic accounts to spread divisive political messages around the 2016 election.

This time, though, lawmakers on the committee came equipped with a roster of fresh complaints – from the proliferation of fake video online to the heightened need to protect privacy and combat hacking.

As they testified, though, some of their most public adversaries sat behind them, including conservative media personalities like Alex Jones, the founder of the conspiracy-minded InfoWars. The presence of Jones, who had been banned from both platforms for violating rules against harassment, seemed all the more striking given a Wednesday afternoon hearing in the House, featuring Dorsey, focused on allegations that tech is biased against right-leaning users.

The tech executives remained focused on their arguments to Senate leaders that they had made great strides cleaning up their sites and services ahead of the 2018 midterms, when the composition of Congress is up for grabs.

"We were too slow to spot this and too slow to act. That's on us," Sandberg, the chief operating officer of Facebook, told the Senate Intelligence Committee to open the hearing. "This interference was completely unacceptable. It violated the values of our company and of the country we love."

Sandberg added: "We are more determined than our opponents and we will keep fighting."

Dorsey, meanwhile, stressed to lawmakers: "We found ourselves unprepared and ill-equipped for the immensity of the problems we've acknowledged. Abuse, harassment, troll armies, propaganda through bots and human coordination, disinformation campaigns and divisive filter bubbles – that's not a healthy public square."

"Required changes won't be fast or easy," he said. "Today we're committing to the people and this committee to do it openly."

The executives' appearance – their first testimony to Congress – comes as lawmakers seek fresh assurances from the tech industry that it is prepared for the November midterm election, two years after major social media sites faced an onslaught of propaganda from Russia targeting the 2016 presidential race.

Sen. Richard Burr, R-N.C., the chairman of the Senate Intelligence Committee, opened the hearing by citing the promise of social media before adding, "But we've also learned about how vulnerable social media is to corruption and misuse. The very worst examples of this are absolutely chilling and a threat to our democracy."

Already, Russia and Iran have sought to interfere by passing themselves off as American groups or people to shape the views of American voters, say lawmakers and technology executives. Facebook, Google and Twitter together took down hundreds of accounts tied to the two countries last month, a move that prompted Burr to open the hearing Wednesday by expressing fear that "more foreign countries are now trying to use your products to shape and manipulate American political sentiment as an instrument of statecraft."

"Each of you have come a long way with respect to recognizing the threat," added Sen. Mark Warner, the top Democrat on the committee. "The bad news, I'm afraid, is that there is a lot of work still to do. And I'm skeptical that, ultimately, you'll be able to truly address this challenge on your own. Congress is going to have to take action here."

"The era of the Wild West in social media is coming to an end," he said. "Where we go from here is an open question."

In response, Sandberg stressed Facebook's work to hire more people to review content and invest more heavily in artificial intelligence that can spot fake accounts. Dorsey pledged a thorough review of the way Twitter works, echoing comments he made to the Washington Post earlier this month. He also said that Twitter is "considering" plans to label automated accounts, typically called "bots," though he warned that whatever system the company unveils will not be able to detect all bots created by users.

"It's really a question of the implementation, but we are interested in it, and we are going to do something along those lines," he said. 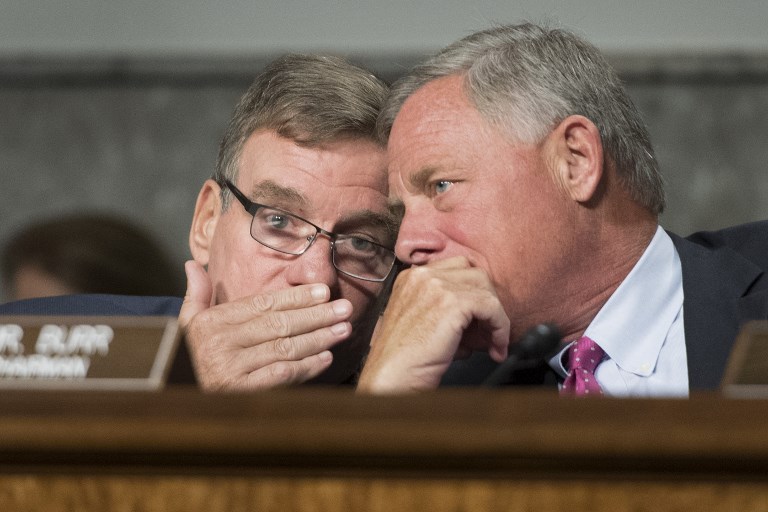 At a second congressional hearing Wednesday, Dorsey will also seek to address Republican lawmakers' allegations that Twitter unfairly targets conservative-leaning posts and accounts during an afternoon hearing on the House Energy and Commerce Committee. President Donald Trump has echoed those charges – last week threatening Google in particular with regulation. Tech giants have denied the accusations.

"Let me be clear about one important and foundational fact: Twitter does not use political ideology to make any decisions, whether related to ranking content on our service or how we enforce our rules," Dorsey planned to tell lawmakers. His testimony, submitted ahead of the hearing, included a new study that found Democratic and Republican lawmakers have equal reach on the site.

Sandberg found herself similarly under siege about the company's data-collection practices. Sen. Ron Wyden, D-Ore., specifically said the vast troves of information at Facebook and Twitter could be the "weapon of choice" for hackers working with foreign powers, so the industry "must not make it easier for our adversaries to seize these weapons and use them against us."

Facebook and Twitter have been under pressure to police abusive, hateful or harassing content on their platforms – including accounts like Infowars, a conspiracy theory site that the tech giants suspended last month. The founder of that site, Alex Jones, was spotted entering the Senate office building where lawmakers were holding their hearing.

The founder of that site, Jones, hovered around the Senate hearing. He convened his own press conference criticizing the platforms for anti-conservative bias. Sweating and yelling in front of TV cameras outside the hearing room, he said the tech companies' bans on him have violated Americans' first amendment rights. He later appeared to clash with Sen. Marco Rubio, as the Republican lawmaker was being interviewed by reporters. During the hearing, Jones appeared to murmur into his phone and film the proceedings.

Absent from both hearings will be Google. The search giant had been invited to testify at the Senate Intelligence Committee, but declined to send Larry Page, the chief executive officer of Google's parent company, Alphabet.

The decision drew sharp rebukes from Democrats and Republicans alike, who accused Google of trying to dodge congressional scrutiny, though lawmakers could have subpoenaed Page or his peers and opted against it. Lawmakers explicitly left an open seat at the hearing to call attention to Google's absence.

Kent Walker, the senior vice president of global affairs at Google, said in a blog post Tuesday that he would still come to Washington "and brief lawmakers."  © 2018. Washington Post