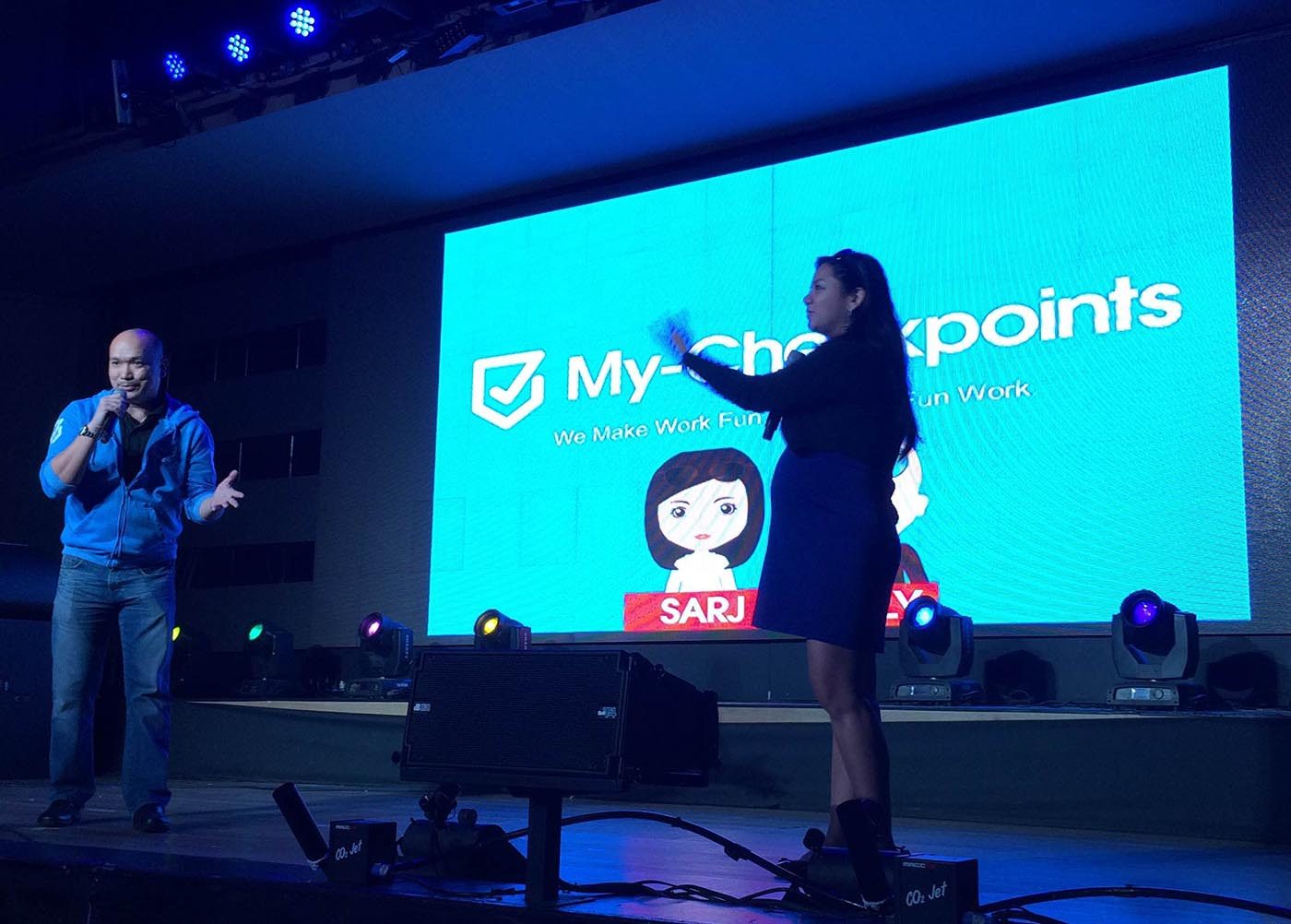 MANILA, Philippines – You can tell an industry has made it when the economy starts rearranging itself to support it. In recent recent years the BPO (Business Process Outsourcing) sector has shone brighter than the rest and many new businesses are coming up to find ways to better exploit its potential.

Even largely traditional sectors such as real estate has seen radical new models to cater towards BPOs needs;  from helping firms find flexible office space to cutting down on BPO worker’s commuting times.

One aspect of BPO life that has gone relatively unexplored however is worker performance and company culture which is where startup My-Checkpoints wants to play in.

Billed as “a marriage of business intelligence and games,” My-Checkpoints is a cloud-based  performance platform designed for BPOs that aims to make work-life a little more fun for BPO workers.

“Call center work is very hard. You work at night you’re away from your family and you’re not allowed to use your phones so what we really wanted to do was make people happier by making the workplace happier,” said Sarj Ablaza Estrella, My-Checkpoints co-founder along with her husband Rally.

The platform has been designed to operate like a mobile phone game complete with achievements which can be unlocked by workers through good work. It also comes with a leaderboard that shows a worker’s progress, based on work performance, against his or her erstwhile competitors. To round off the fun, it also offers firms the ability to reward its well performing staff as they hit achievements set in the platform. These rewards and prizes also come in both virtual as well as real-life forms.

The goal is to get workers more engaged at work which eventually translates to higher performance and happier customers.

Employee disengagement is becoming a real problem, as shown in a 2013 report by HR consultancy the Gallup and Hay group that said that 70% of employees worldwide are disengaged today.

The report also pointed to studies that showed that a happy and engaged workforce increases productivity by 43% and profits by 33%.

Disengagement is a problem for a BPO firm in particular, especially call centers, where having disengaged employees affects customer satisfaction as well.

“The reason that this is happening is because the new workforce, the millenials say there is a huge disconnect between how they live their lives outside and how they work” said Rally Estrella who has the distinction of being the country’s first certified “gamification” expert.

“The tools they use outside the office and in outside are vastly different,” he added.

To combat this, the platform is designed to look and operate like popular social media platforms such as Facebook and Instagram, especially its emphasis on striking visuals which My-Checkpoints apes with striking cartoonish visuals.

It also borrows other social elements in order to bridge that gap.

“People nowadays gravitate towards the visual, 90% of what people process is visual. With My-Checkpoints, we basically bring the original social media and gaming knowledge into the work place,” Estrella said. The platform, he said, “provides positive feedback and positive loop to engage employees. Next we add a layer of social media to make what they do memorable and exciting. This also helps in making the company culture go viral.”

“Visually the dashboard also looks like a gaming platform,” Estrella said, “which is a lot better than looking at an actual document.”

Having engaged employees is all well and good but any modern business, especially in IT, now needs comprehensive data to remain relevant in the digital era.

This is why behind the striking visuals and gaming platform, My-Checkpoints houses a real-time data analytics to help managers make decisions.

Initially the founders’ goal was to make it as simple as possible since analytics tools often have steep learning curves.

“I’ve been in analytics a long time and one thing I’ve realized with most analytic tools is that you need 3-6 months of training to use. So with My-Checkpoints we wanted to keep it simple so that people can focus on what they’re supposed to do instead of learning how all the bells and whistles work,” Sarj Estrella said.

Conscious of the rapid rise in advanced data requirements driven by BPOs beginning to move up the value chain, My-Checkpoints has tied up with Microsoft to add more options to the platform.

Initially the data part of the platform built for first level employees but now with the Microsoft partnership the platform is now available for C-level executives, Sarj said.

Announced earlier this month, the partnership incorporates some of Microsoft’s visual driven analytic software such as PowerBI into the platform.

This gives users of the platform the ability to track progress in real-time and across different offices as well as to compare progress against historical data. 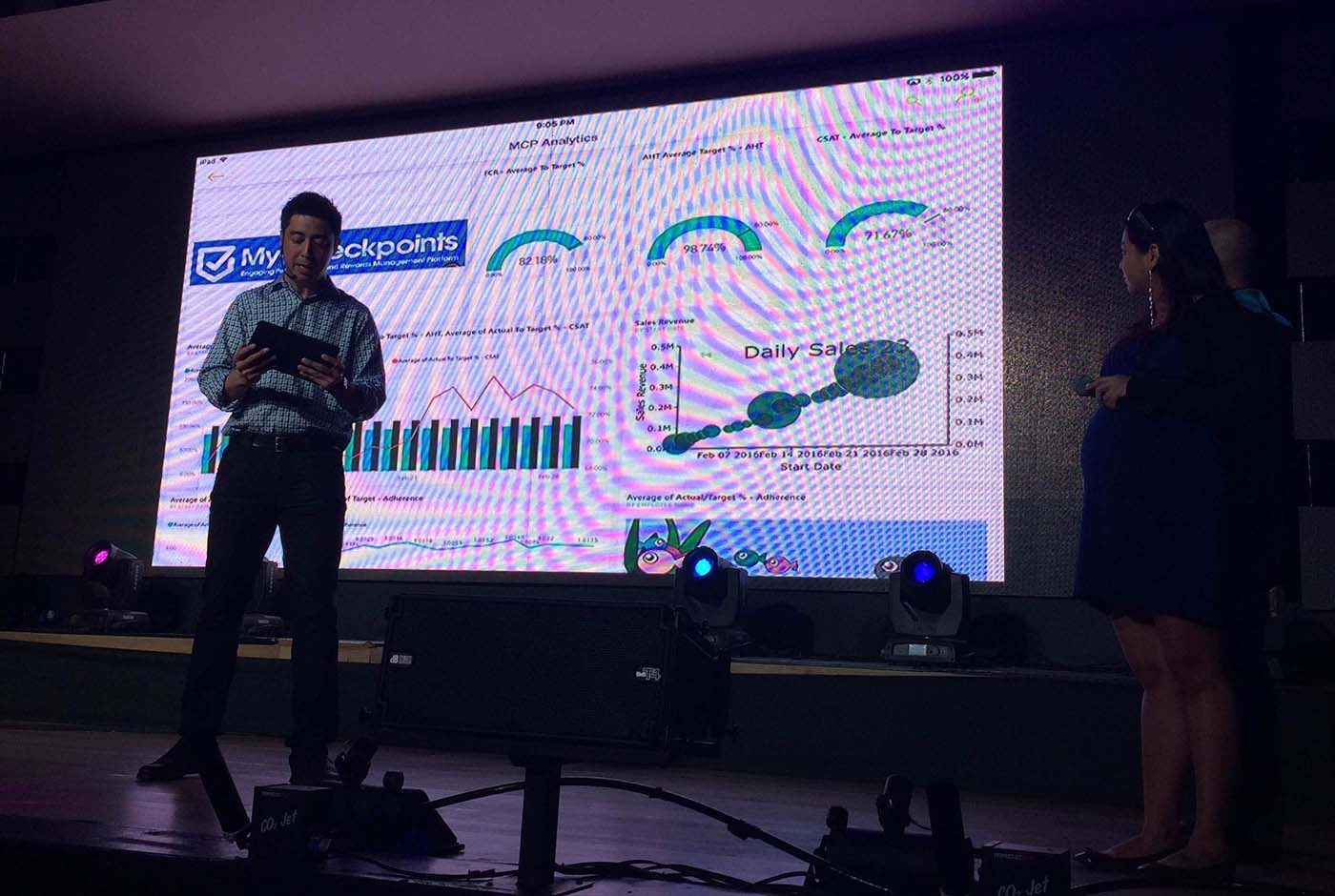 The tie-up also allows users to get My-Checkpoints as part of a Microsoft cloud suite bundle or as a standalone product.

The firm gives equal weighting to both the analytical and motivational or game aspect of the tool because as Sarj pointed out it’s always a fine line between making a work tool “just a game while at the same time ensuring that it isn’t boring to use.”

“We try to marry both aspects because a game without a purpose won’t make sense. In reality if people just put a game in the office it could just be a distraction. So we want to make sure that whatever game-like element that we do is really tied into performance,” she explained – Rappler.com