CHICAGO, US – Virtual reality headsets are not only revolutionizing how games are played. It is also revolutionizing the treatment of generalized anxiety, depression and post-traumatic stress disorders.

What is being called virtual reality therapy is more than a game, however.

Through mobile devices attached to head mounts, therapists can now immerse their patients in virtual scenarios that trigger their anxieties, phobias or depressing thoughts. Smartphones make it possible for therapists to place a person with a fear of heights on top of a building while a veteran who has post-traumatic stress disorder (PTSD) can be immersed in a virtual war zone.

“It has the ability to facilitate the same physiological response in your body and in your psychology as well,” said Scott Lowe, general manager of Psious, one of the companies that develop software for virtual reality therapy.

Like traditional exposure therapy – where therapists guide patients through imagined scenarios – virtual reality therapy for phobias, various forms of anxiety, and PTSD are designed to desensitize patients over time. This can be achieved by repeatedly immersing patients in realistic environments.

Software allows therapists to control the duration and magnitude of the traumatizing or fear-inducing experience. During sessions, therapists monitor patients’ verbal and non-verbal reactions through sensors, so they can reduce or increase the intensity of the experience accordingly. Thereafter, patients process their emotions with their therapists.

As for depression, patients undergo a process called “embodiment” where they see themselves through an adult avatar that mimics their movements.

In an experiment by the University of College London and ICREA-University of Barcelona, patients were instructed to comfort an upset child in a virtual scenario. As they consoled the kid, the child slowly stopped crying. After, the patient and the virtual child switched roles; patients then embodied the virtual child and heard their own comforting advice repeated to them. Patients underwent this process over several weeks. A month after, they reported a change in how they responded to real-life distressing situations. 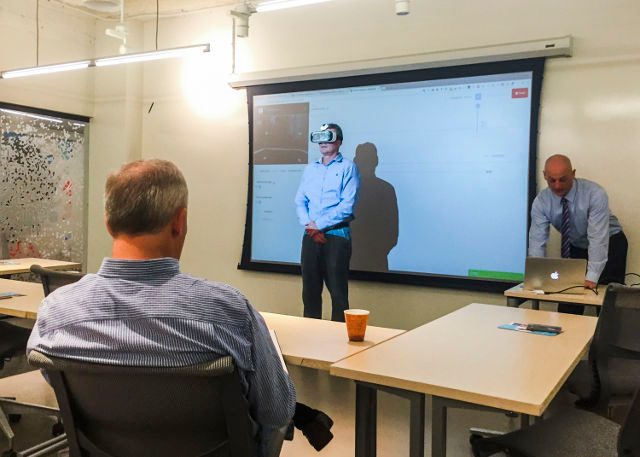 The science behind the technology

Max North from the Kennesaw State University and other researchers said that compared to traditional exposure therapy, the virtual aspect still makes it more effective and economical in the long run. The required amount of time spent in therapy can be reduced because patients can be treated faster. Studies also claim that virtual reality therapy is safer and less disconcerting for patients than being immersed in real-life situations.

Agosta and Lowe noted that technology merely complements the therapist. Virtual reality therapy was not created to replace professionals, since it is possible to re-traumatize patients if they enter virtual environments without guidance.

Despite the advancements, virtual reality therapy is not quite there yet.

“My clients would be bothered by the use of equipment such as this,” said Suzy Roxas, who has a master’s degree in psychology from De La Salle University. “It would be too foreign a concept and would not allow the therapist to see facial expressions much…Instead of focusing on the emotions that the client is experiencing, they would be focused on managing a machine which could be distracting.”

Its visuals also seem five years behind. Although the scenarios do not precisely resemble real life, Lowe said that its level of realism does not diminish its effectivity. This becomes problematic in cases where patients’ experiences are nuanced, said Roxas whose clients are mostly survivors of sexual abuse with PTSD.

“As the elements of their fear are highly personal (face of abuser, look of the house, temperature of the place), it is my sense that the machine will be unable to fully recreate that,” said Roxas. Virtual reality therapy in the Philippines?

“Considering the circumstances in our country, there seems to be a high risk for Filipinos to develop PTSD,” said Jenina Nalipay, a professor of Experimental Psychology at De La Salle University. ”Our country’s geography makes it prone to natural disasters such as typhoons, floods, and earthquake; exposure to which could lead to PTSD.”

Despite the technology’s capabilities, the question of whether or not this can be fully adapted in the Philippines is still unanswered. Accessibility remains an issue especially in developing countries. The cost of virtual reality therapy has gone down since the inception of specialized virtual reality equipment used to treat war veterans. But headsets now are still marketed at $500-$800. Some companies also charge an annual subscription fee of around $1,200 for using their virtual reality therapy software.

In the simplest terms, the price of technology for mental health treatment might increase a lot of therapists’ fees, said Lowe.

This is partly because of stigma, “public ignorance,” lack of resources, and insufficient funds, said Dr. Margaret Chan, director of the World Health Organization at a forum in 2010.

“It seems relatively expensive, but if it can help with one’s mental health and well-being, then it would be worth investing in,” said Nalipay. – Rappler.com