5 things to expect at the #MicrosoftEvent 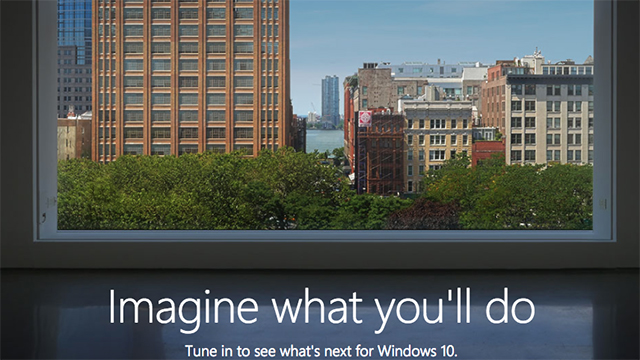 MANILA, Philippines – Microsoft is set to announce what’s next for its operating system (OS), Windows 10.

The event takes place in New York, USA, at 10 am on Wednesday, October 26 (US time), but will be streamed live at www.microsoft.com/en-us/octoberevent. Tune in at 10 pm on Wednesday if you’re in the Philippines.

For Windows 10 users, it’s a chance to see how their system will be evolving in the near future. Pundits across the globe, however, have speculated on a few other things that the big M might be announcing. Here’s a rundown of what technophiles are looking forward to:

The event’s announcement made on Microsoft’s blog explicitly invited readers to see “what’s next for Windows 10.” It’s known in tech circles that the company is planning two big updates for the OS next year. Microsoft will most likely be elaborating on these at the #MicrosoftEvent.

The Verge mentioned that Microsoft has been actively testing out its new trackpad technologies that would allow users to control and customize gestures on a trackpad. It’s good to see Microsoft paying more attention to the trackpad now, the article noted.

With the event scheduled at around the same time as previous Surface-related events, there’s a chance we’ll see a new model in this product line, The Next Web speculated. The website fortifies its suggestion with the fact that there have been recent leaks of patents and trademarks showing new Microsoft hardware.

In the leaked images featuring the rumored new PC, the screen (said to be in the 24- to 27-inch range) can be configured as a regular upright all-in-one or can be laid flat like a surface on which one can draw or design. A new piece of hardware like this could be the centerpiece for Microsoft’s event, which the company said will focus on creativity.

These days, it feels like everyone is getting in on the VR action. Microsoft has its own, the HoloLens – which, more than being just another pair of VR glasses to add to your growing collection, throws in a manner of augmented reality to the mix. Microsoft calls it a “holographic computer,” which displays holograms with which you can interact.

On the HoloLens page on the Microsoft site, there is an obvious banner pointing towards Microsoft’s event page. That’s another reason to believe that these “mixed reality” glasses will be getting some stage time. The Next Web also noted that Microsoft CEO Satya Nadella said in a conference that “mixed reality” is one of the big bets that the company is making.

Earlier in October, Twitter user WalkingCat showed us what’s supposedly a revamped version of Microsoft Paint – one that can do 3D paintings. Given that creativity and 3D are the themes of the Microsoft event, presenting a fresh version of the classic Windows application should fit right in.

Devices like Google Home and the Amazon Echo may have another competitor to worry about. According to Windows Central, we might be seeing Microsoft’s own “smart assistant” device, which could be related to a Windows 10 feature called “HomeHub.” Microsoft’s digital assistant, Cortana – already available in Windows 10 devices – will be at its center, answering questions and most likely, turning off lights too. The device will also reportedly allow users to store files directly onto the device, which can then be streamed to other connected devices.

Will you be tuning in? – Rappler.com