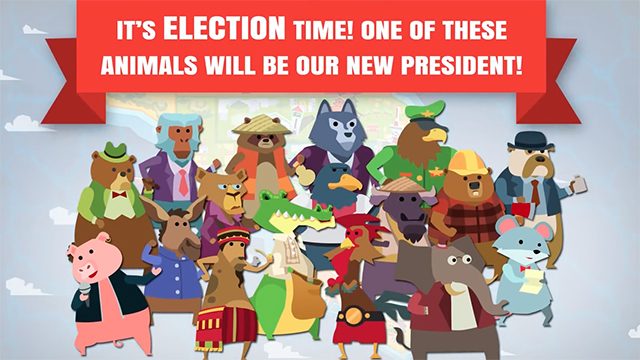 Whichever side you’re on, I think it’s clear that this year has been a wild one in the realm of politics. We and the United States just got through our respective elections and it was not without controversy. But if you’ve ever wondered what you would have done should you be in the shoes of the presidential candidates, then boy do I have the perfect game for you.

Political Animals is a game freshly released on Steam on November 3. It’s a turn-based strategy game where the objective is to win the election by whatever means possible. It was developed by Philippine-based company Squeaky Wheels. The game was also demoed on the floor of this year’s Tokyo Game Show and ESGS prior to its release.

And after a couple days of playing this indie title, I can honestly say it’s one of the most fun and entertaining games I’ve played in a while. Here’s why:

It hits close to home While the game lets you play in countries that look like the United States and Japan (they have different names in the game), much of the satirical content is focused on the Philippines.

For instance, before the game starts, you get to choose three of your starting campaign staff members. Now while most of the staff members names are puns, combining their animal name with a human name like Bernardog and Felipig, there are a few stand-out names like Duturtle and Aguinaldog. These campaign members have their own special abilities, which I will get to later.

But it’s more than just amusing puns. As you begin your campaign, the game will occasionally throw you in situations that will more or less be familiar to you if you’ve followed the campaign season months ago.

One situation will have a famous religious figure declaring you as the chosen candidate. Should you accept this fact, you get the votes of tens of thousands of animals but you will lose favor from some patrons who are essential to your campaigning. If you do accept this, you can expect that a few turns later a religious figure returns to ask you for a material gift. Sounds familiar? It’s not just satire, it forces you to see the grey area that often comes when candidates deal with the elections. The situations given to you will sometimes push you to choose to be corrupt lest you want to lose the game. And because the game gives you absolute freedom to do whatever it takes to win without being punished after the elections, it will make you to reflect on your morality and how far you’re willing to go to succeed.

Some events are mild. There’s a particular one where a traffic enforcer offers to “help” you through a traffic jam so you can attend a charity event for the disabled. While your cause may be noble, that “wang-wang” attitude is still frowned upon in Manila and whatever your reason, it can still be considered a scandal. There’s also one where you can use a potential romantic connection with an actress to gain more votes.

Other events border the line of corruption. Some are even quite similar to a few exposed abroad. Similar to one of the scandals hounding the President of South Korea, a patron will want to use you to get their daughter into an elite school. Should you accept the proposal that patron will be more favorable towards you and will give you more funding.

You may look at this and these situations and think “Well I’m never going to do any of these in real life,” but when the only objective of the game is to outsmart your opponent and win, it could make you consider turning a blind eye. Because the consequences that come after winning an election are taken away, you will have a tendency to think twice about refusing a generous offer or an opportunity to win more voters at the cost of getting your hands a little dirty.

However, you can choose to not wade into the muddy grey gap between you and the Presidential seat. Though you can expect a tough uphill battle, especially if your opponent has a penchant for creating fake news stories about you as well as bribing their way to victory.

At the end of the election the game will measure your morality, and thankfully for my case, I’ve had some pretty clean battles. Much like Civilization, you get to customize many aspects of the game before you begin. You can choose your character, its strengths and weaknesses, its headquarters, its knowledge in political concerns and more. You can even change how many days you have to campaign and how much money you are going to start with. These will all affect the outcome of the game and how your opponent will play.

All of these make the game replayable as you can simulate different scenarios and factors in an election. See if you can win cleanly while facing a tough opponent.

The number of factors in play and the number of strategies that you can execute here makes it a decent strategy game.

As mentioned earlier, while they all have a similar set of standard actions, each member of your staff has different special abilities. Dogs will allow you to gain more logistic points by using your influence in surrounding cities. Turtles can campaign for you without the use of funds. Owls can get you out of a scandalous situation by settling scandals. Pigs are your thugs, and many more. You can switch them in the middle of the game should you feel like you need a particular animal more than the other in a certain situation.

More than just your staffers and your abilities, there are also several ways to get more voters and win an area. If you are knowledgeable in the same concerns as the people in that area, then you will most definitely have a more effective campaign. You can rally to increase this effect even more.

Wooing patrons is another strategy you can take to win the elections. There are three different types of patrons that you have to woo for your actions to have a maximum effect. The wealthy patron can give you more funding. The influential patron can lessen the logistics needed to carry out an action. The popular patron can help swing voters to your side.

If you’re not into wooing, you can also bribe your way into winning. Though obviously, you will risk having a scandal unearthed all of the sudden.

Finally, there’s the surprise factor of events happening in different areas. Situations brewing in different cities can help you gain thousands of voters to your side immediately. Be careful though as these situations can force you to create a scandal. If not immediately, it will come back at some point.

Want to see if you have what it takes to win an election? It’s on Steam for $14.99. For those living in the Philippines, the game is offered at a special price of P250. – Rappler.com