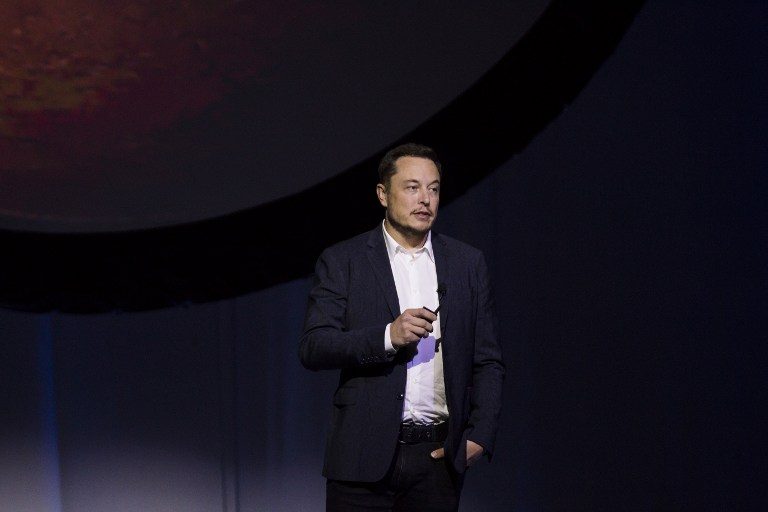 Facebook Twitter Copy URL
Copied
In a sector where entrepreneurs often speak of 'moonshots,' Musk is one of the biggest dreamers

SAN FRANCISCO, USA – Sending tourists for a trip around the moon is the latest big idea launched by Elon Musk, a Silicon Valley star known for turning his passions into visionary enterprises.

Musk has become one of the United States’ best-known innovators. He was a founder of payments company PayPal, electric carmaker Tesla Motors, and SpaceX, maker and launcher of rockets and spacecraft.

SpaceX recently announced that two private citizens have paid money to be sent around the Moon in what would mark the farthest humans have ever traveled to deep space since the 1970s.

In a sector where entrepreneurs often speak of “moonshots,” Musk is one of the biggest dreamers.

The 45-year-old South Africa-born entrepreneur has channeled a dot-com fortune into a series of ambitious ventures.

Besides being the head of SpaceX and Tesla, Musk is the chairman of SolarCity, a solar panel installer recently bought by Tesla.

He also operates his own foundation focusing on education, clean energy, and child health.

And he drafted a paper detailing the feasibility of an ultra-fast “Hyperloop” rail transport system that would transport people at near supersonic speeds, then made it freely available to enterprises willing to pursue the project.

“He is a visionary who has some key passions which he pursues with vigor,” Jackdaw Research chief analyst Jan Dawson said of Musk.

“He doesn’t sit around and wait for people to do something about them; he goes out and does it himself.”

Musk’s penchant for rocketing after his passions may appear to spread him thin, but he has built a record of success.

Musk appears strong on painting big ideas in broad strokes and then enlisting people skilled at tending to the nuts-and-bolts work needed to follow through, say observers.

“He doesn’t seem to be able to focus,” analyst Rob Enderle of Enderle Group said.

“He just likes coming up with the ideas and is good at picking other people who can deal with the plumbing – that is why he is able to do a lot of stuff.”

And while some may wonder whether hubris or realism reigns in Musk’s moves, his businesses have gained value, with the jury still out on the wisdom of the Tesla acquisition of SolarCity.

“He can certainly sell his ideas,” Enderle said.

“The fact his businesses have held together so long indicates he is not a con man.”

Musk more than a year ago took part in creating a nonprofit research company devoted to developing artificial intelligence that will help people and not hurt them.

Musk found himself in the middle of a technology world controversy by holding firm that AI could turn on humanity and be its ruin instead of a salvation.

Technology giants including Google, Apple, and Microsoft have been investing in making machines smarter, contending the goal is to improve lives.

“If we create some digital super-intelligence that exceeds us in every way by a lot, it is very important that it be benign,” Musk said at a conference in California.

He reasoned that even a benign situation with ultra-intelligent AI would put people so far beneath the machine they would be “like a house cat.”

“I don’t love the idea of being a house cat,” Musk said, envisioning the creation of neural lacing that magnifies people’s brain power by linking them directly to computing capabilities.

Living in a game

Some of his ideas have prompted questions about whether Musk is a visionary or mad scientist. He has raised eyebrows with a theory that the world as it is known may be a computer simulation.

“I’ve had so many simulation discussions it’s crazy,” Musk said while fielding a question on the topic at the conference.

He maintained that “the odds that we are in base reality is one in billions.”

Musk lives in Los Angeles and holds US, Canadian, and South African citizenship.

He moved to Canada in his late teens and then to the United States, earning bachelor’s degrees in physics and business from the University of Pennsylvania.

After graduating, Musk abandoned plans to pursue further studies at Stanford University and started Zip2, a company that made online publishing software for the media industry.

He banked his first millions before the age of 30 when he sold Zip2 to US computer maker Compaq for more than $300 million in 1999.