Beyond Pixels: Other expected things at Google’s Pixel 2 event 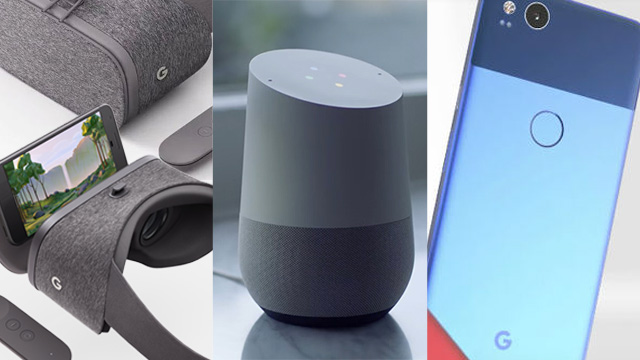 Google is expected to announce the Pixel 2 and Pixel 2 XL smartphones at its October 4 event in the United States (Midnight of October 5, Philippine time).

Beyond this, however, the media is expecting a number of additional announcements when it comes to Google’s products, such as a new laptop and updates to Google’s Daydream virtual reality headset. (READ: Google Pixel 2 and Pixel 2 XL details leak ahead of unveiling)

Here’s a look at some potential announcements that may come up during the event.

Google is said to be announcing a smaller version of its Google Home intelligent assistant, which is being dubbed the Google Home Mini.

The Home Mini, according to Droid Life, is set to act just like the original Google Home but come with a $49 price point, giving it all the bells and whistles of the original, but priced competitively compared to similar offerings, such as the Amazon Echo Dot. (READ: Why Google wants to think more like you and less like a machine)

One other leaked product ahead of the Pixel event is the Daydream View VR headset, also according to Droid Life.

Not a lot of information has been revealed about it yet, but it is expected to come in 3 colors – namely charcoal, fog, and coral – and be slightly more expensive at $99 versus current pricing of the Daydream at $79.

High-end Chromebooks are also said to be coming back, as The Verge revealed in a leak of the Google Pixelbook.

These Pixelbooks will function as laptops, but can also be flipped around and used like a tablet.

In the case of tablet mode, Google would like you to purchase a Pixelbook Pen stylus for $99, though you can probably use other stylus pens as well.

Are you excited for these hardware reveals? Do you think Google has any software reveals for the coming event? Let us know in the comments! – Rappler.com