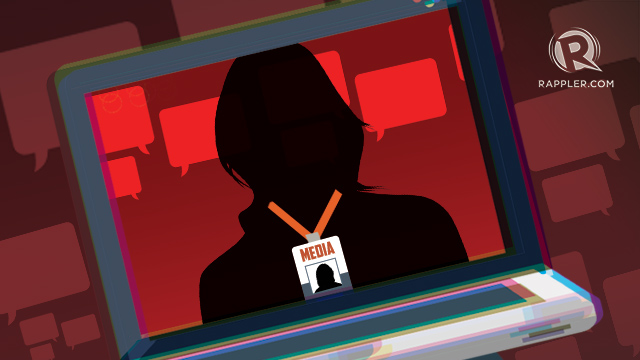 Disinformation, hate speech, online harassment are just some of the issues affecting newsrooms all over the world.

Rappler invited Julie Posetti, an internationally published journalist and academic based in Australia, to talk about these global issues. Posetti has been studying harassment of journalists in the digital space since 2011.

She authored the UNESCO study, “Protecting Journalism Sources in the Digital Age,” which sought to encourage journalists to train themselves on digital security, educate the public, and advocate for institutional reforms to protect journalists and their sources.

The massive study, which covered media trends in 121 countries, showed increasing threats to investigative journalism as new laws and technologies make it more difficult for journalists to protect the identity of sources.

“It can involve images that are designed to confront, images of decapitated bodies, of women being raped, or images of an individual journalist altered into a meme,” Posetti said.

These attacks, she said, are intended to create fear, tarnish the credibility, and cause the retreat of women journalists who were writing investigative reports or critiques of personalities or institutions.

During her talk, Posetti shared anecdotes of women reporters who were called words like ‘slut’, ‘bitch’, or ‘presstitute’. One woman journalist even received death and rape threats targeted towards her 5-year old daughter. 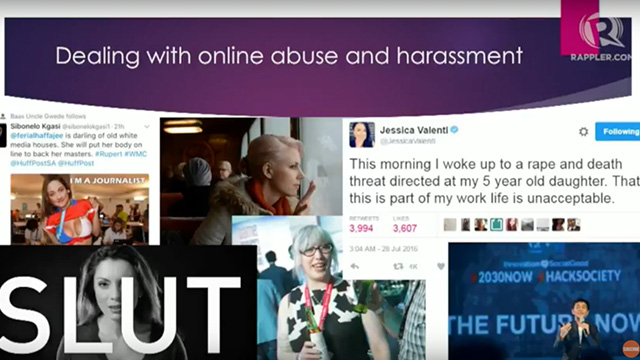 Aside from verbal and visual attacks in social media platforms, she added that journalists also encountered cyber attacks wherein their private information were published online or their identities were used to send fake messages.

Citing a 2014 research by a non-profit organization in Britain about journalists, celebrities, politicians, and musicians, she said that journalism was the only category where women received three times more abuse in Twitter than their male counterparts.

Some women journalists are said to be withdrawing and choosing to leave the profession because of this problem, thereby threatening freedom of expression and active participation of women in the civic space.

Who are behind these attacks? Posetti said this could range from individuals to troll armies, and state-sponsored propaganda. (READ: Propaganda war: Weaponizing the internet)

Online harassment of journalists is also becoming more associated with the proliferation of fake news and disinformation in social media platforms. (READ: Fake news and freedom of expression in Southeast Asia)

How newsrooms are dealing with harassment

Global trends show that news organizations are closing down the comments section of their websites to counter this widespread problem.

Most journalists also choose to avoid interaction by ignoring or blocking online harassers. Some newsrooms, on the other hand, resort to creative responses to harassing comments.

“Some of them fled their homes because they were afraid of their safety and for their families,” she continued.

Posetti advised journalists faced with cyber attacks to take these seriously and to inform the senior management of their news organizations early on about the harassment. Legal action should also be considered.

In July 2017, Rappler launched a campaign called #InspireCourage to fight and stand against all forms of harassment and intimidation against journalists and media companies. (READ: Amid harassment, Rappler vows to #InspireCourage)

While online harassers target more women journalists, Posetti emphasized that men in the field of media and journalism should also be included in the fight against cyberharassment. – Rappler.com