Brutal grace: Kratos grows up in ‘God of War’ return Facebook Twitter Copy URL
Copied
In this preview of what may be this year's biggest PS4 game, we explore how Kratos has grown as he faces a challenge bigger than killing Zeus: fatherhood

Kratos, the eponymous hero of Sony’s definitive action series, is set to return in what will be his first outing on the PlayStation 4, coming out April 20.

Kratos is as wicked as ever, tearing demonic hordes up like pieces of paper and stomping on heads as if they were nothing but watermelons. In a special preview that Sony held for select media, I got a taste of that ol’ Spartan charm – the kind I didn’t know I’ve missed a lot until I saw and experienced it again, and which you may be able to see for yourself in a video on the bottom portion of this article.

Rampaging on hapless demons – “draugr,” the game calls them – hasn’t gotten old. And for the 2 to 3 hours I was able to play, I can say with confidence that the God Of War‘s jewel in the crown – ultra-violence – shines as brightly as it ever has. The short of it: If after a day of work all you want to do is to beat virtual baddies to a bloody pulp, this is your game.

If there’s anything that has gotten slightly old in this game, however, it’s Kratos himself. Not by much of course. He still has the musculature of a Greek god. He’ll still crack you open like a cold one. But now he has a beard. But more importantly, there is something subtly different about his character – he’s trying to temper his temper. And this is because he now faces a challenge more difficult than killing titans and Zeus: fatherhood.

Or rather a second chance at it. Kratos, in the original games, was tricked into killing his own family by the god of war Ares, thus propelling his quest for vengeance.

After toppling Zeus’ dynasty in Greece, Kratos exiled himself to…Norse mythology. This is true. Adam Kaufman, marketing producer for God Of War, told us that this isn’t a reboot but a continuation of the series. Only this time, Kratos is in where the Nordic gods reside. (Boy are Thor and Loki in for a treat!)

And it is during this self-exile that Kratos found the time to sire a boy named Atreus. The kid appears to be around 11 or 12, and is central both to the plot and gameplay of the new God Of War.

BEFORE WINTER. A protective stave once hid Atreus and Kratos from the powerful, mythological beings of Nordic legend. But with the passing of Atreus’ mother, so does the stave, forcing father and son to fight and survive through demons and gods.

Atreus, feisty yet still innocent, is tasked with a journey to bring his mother’s ashes to the top of what might be the Nordic equivalent of Olympus. He’s trying to show his father that he’s strong enough but clearly he isn’t yet. In battles, Atreus is a necessary partner for bringing down some of the game’s enemies.

Kratos essentially has to escort Atreus in this game, but thankfully, the partner dynamic is more The Last Of Us than Ico. Like Ellie in The Last of Us, Atreus helps in combat, stunning and distracting enemies with his bow and arrow, which has proven crucial in some of the battles I’ve experienced so far. By distracting enemies, Kratos is able to sneak in and land a few free shots on the enemy.

In situations when there are multiple enemies of various kinds, Atreus’ presence can prove to be the difference between survival and death. Atreus isn’t invulnerable though. Like Ico’s Yorda, the baddies can grab him, forcing you out of battle and in rescue mode. Out of battle, Atreus makes himself useful by tossing the occasional heavy chain for Kratos to climb.

What’s most interesting however is the emotional link between father and son. In some of the early dialogue, it’s clear that Kratos hasn’t been much of a father to Atreus, with the now-dead mother doing most of the teaching and parenting. Circumstances have changed that, and Kratos now has to teach Atreus the ways.

Of course, Kratos’ ways – wrathful, angry, and violent – are not exactly model parent behavior. Kratos senses some of these traits in Atreus, and perhaps having already treaded such a path, is afraid for Atreus becoming the same.

According to Kaufman, Kratos has shunned his own godhood, and to a great extent, the violent past associated with it. This story is about Kratos “breaking out of his destructive cycle” and “taking control of his future” – a future clearly represented by the kid in front of him.

Kratos must teach Atreus how to fend for himself, how to survive, but not entirely in the way that he has in the past. Atreus, with his innocence, is a reminder of the humanity that Kratos has lost.

From what we’ve seen, this plot and character dynamic is engaging. Whereas Kratos was purely a god of war and destruction, whose humanity has been completely perverted by his desire for vengeance in the previous games, here we see the raging Spartan attempting to be more than that, to be a good dad, for the lack of a better phrase.

It’s a promising redemption story not unlike that of a hardcore convict who’s been miraculously given a second chance at life, to maybe do good.

Early on was a powerful scene where we see Atreus do something for the first time that Kratos done so countless times. In the boy’s eyes, one could see fear and confusion starting to cloud his innocence, which Kratos is forced to handle as though he were a parent explaining the birds and the bees to a kid for the first time.

In this scene, it’s not only Atreus we see growing, but Kratos himself too – a god rediscovering his humanity through a boy with the potential to be a god. I’m hyped, and it’s intriguing to see just how far this dynamic will be taken throughout the game.

Santa Monica Studio is certainly aiming for more depth and maturity as far as the narrative goes. And as Kaufman tells us in an interview, it’s also because the team has grown with the game for 15 years.

“The story has a lot of parallels not only to all of us in the studio but really, to the studio as a whole. We have been growing up with this game for the last 15 years.” – Andy Kaufman, marketing producer, Santa Monica Studio

Kaufman also owes some of the game’s maturity to the fact that many of the staff have become parents themselves through the years:

“A lot of us have become parents over the time, myself included. We used to call the Greek [mythology] days – as our principal animator, Bruno [Velasquez] refers to it – as our college years. You know, we were like we’re kind of wild and crazy; we’ll make this outlandish action game, and it’s going to be amazing. And now, we see a time, where we’re growing up, we need to make a more mature game.”

Closer to the action

Of course, the brutality hasn’t been tamed. It’s still there. The ripped up bodies. The torn faces. Shredded limbs. It’s still a fatality fest out here. Only this time, it feels even more personal and in-your-face. Here’s a 3-minute demonstration of that, featuring scenes that are part of the exclusive demo at the event:

As you’ve seen in the trailers, the new God of War shifts to an over-the-shoulder third-person view similar to Resident Evil 4 and Gears Of War, and dumps the series’ traditional fixed camera presentation.

It’s a refreshing change, and brings you closer to the action than ever before, while also making it more difficult to dodge attacks from behind. Now you’re not an all-seeing god spying on the action like a drone; you’re actually Kratos, and you’ll have to turn to dodge attacks from behind. There is a warning arrow, however, to thankfully help you out and let you know when an attack might be coming.

In the older God of War games, you only felt this kind of immersion in certain scenes, when the camera breaks off from its fixed perspective and follows Kratos as he approaches to finish off a boss.

Now, it carries this kind of immersion all throughout, thanks to the new camera. Kaufman described the brutality of the older games as more “outlandish” – kind of like you’re watching a cartoon character from afar – while this one is more plausible and gritty because the camera brings you so much closer to the action as if you can touch the pallid sinew on Kratos’ shoulders and arms.

It’s also more plausible and gritty as Kaufman says that  while it isn’t fair to say that the game is directly influenced by mixed martial arts, he does admit that MMA plays a big role in making the game’s violence and melee action feel more realistic. 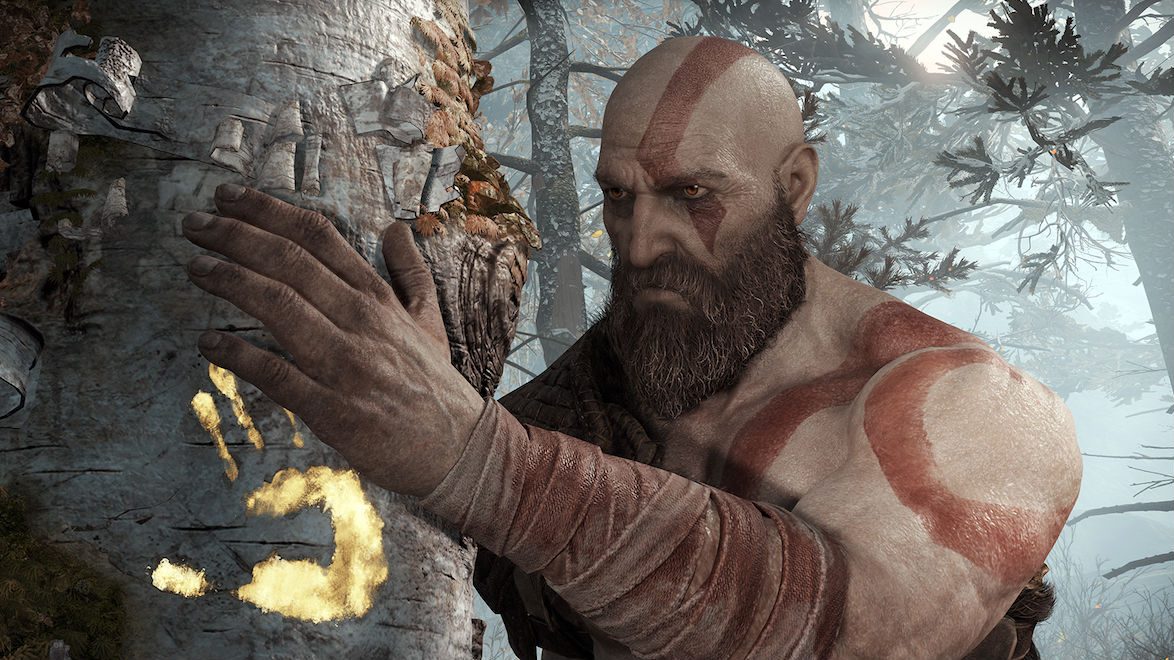 However, they didn’t exactly hire a UFC fighter to do the motion capture for Kratos. Instead, they turned to a YouTuber who had been, for fun, making videos where he recreates moves from fighting video games – Eric Jacobus.

Bruno Velasquez, the game’s principal animator, had seen Jacobus on YouTube years back, saw him recreating moves from Street Fighter and Tekken, and said, “That guy needs to be our Kratos. Like he’s Kratos. Look at his moves. Look at how he’s flying and doing Superman punches!”

So they pretty much just sent the guy a message on YouTube, and Jacobus – as Kaufman retells the story – was all like “How the fuck could I say no to that?” And we mean, who wouldn’t want to actually BE Kratos, especially if you’re a guy who is actually inspired by video games.

Kaufman also tells us that they’ll be coming out soon with a video featuring Jacobus and his work for God of War.

While the actor Chris Judge plays the voice of Kratos and does all the cinematics, it’s Jacobus’ moves you’ll see doing the occasional chokehold and unleashing a fury of fists on one of the game’s unlucky foes.

Combat in the new God of War is also less of a street fight and more of a strategic MMA bout. You’ll need to rely on your full arsenal of light attacks, heavy attacks, axe throws, axe retrieval, and hand-to-hand combat – as well as Atreus’ assistance – to successfully win against the hordes.

The game throws an increasing variety of enemies on you, and you’ll have to understand what kinds of attack works, and which enemies to go after first, or whether to parry with your shield or just roll away from danger. It’s deeper than previous God of War games, but also, in the few hours I’ve played, not as torturous as the Dark Souls series.

RPG elements also make it to the game, and will let you loot, craft, and upgrade weapons; level up stats and skills; unlock a skill tree, and unlock new abilities with runes you put in your Leviathan axe. Like the narrative, the gameplay is deeper, and will provide more meat for gamers. Put simply: It’s Kratos like you’ve never been before.

From the short time, I’ve had with the game (the game is said to range from 20 to 30 hours), it’s clearly looking like this summer’s ultimate PS4 blockbuster, and the game that just might free some of us from the current spell of Monster Hunter: World. – Rappler.com

(Full disclosure: Sony, publisher of God of War, sponsored the flight and accommodation to Singapore where the God of War media preview event was held on April 13, 2018.)