Every major announcement at the Huawei Mate 20 launch 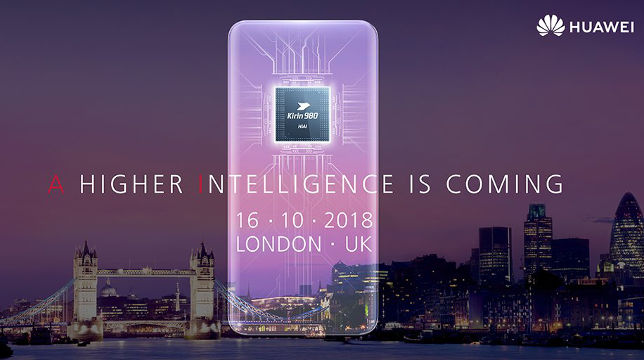 MANILA, Philippines – After Samsung, Apple, and Google have unveiled their best and brightest in the year’s second half, it’s now Chinese giant Huawei’s turn to wow us with their newest flagship: the Mate 20 series. (READ: Here’s how Huawei’s Mate 20 and Mate 20 Pro are shaping up)

Huawei, which is toe-to-toe with Apple in the number two spot in the smartphone sales race, will attempt to raise the bar again after their P20 Pro was considered to be the company’s best ever phone yet. Tune in with us, watch the livestream above, and stay on this page where we’ll be giving you our updates about the event. The stream starts at 9 pm, Tuesday, October 16, Philippine time. 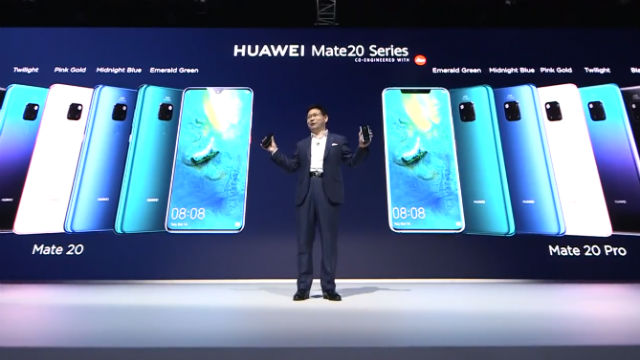 The Mate 20 will have an 18.7:9 aspect ratio while the Pro is even slimmer at 19.5:9. Yu touted the Pro’s high color saturation and contrast ratio thanks to its new OLED display.

The screen of the Mate 20 is 6.53 inches while the Pro is 6.39 inches. The screen is also curved similar to the Samsung’s flagship Galaxy models.

The Pro has the added benefit of an in-screen fingerprint sensor although it is not the first phone to deliver the feature. Yu touts that their fingerprint scanner is 30% faster than other models.

The Mate 20 phones will make use of a new proprietary storage format – nanomemory cards. The cards are said to be 45% smaller than microSDs, which are the standard cards seen on phones.

As for water and dustproofing, the Mate 20 has an IP53 rating while the Pro has an IP68 rating. The phones also have an optical pattern on the back, which makes the phone easier to grip and makes it more resistant to fingerprints, said Yu.

Both phones will come in 5 colors such as classic gold, midnight blue, pink gold, and the twilight color introduced in the P20 phones, which drew positive reactions. 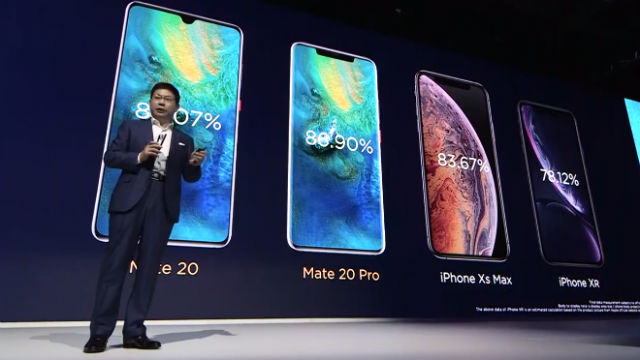 The Mate 20 was frequently compared to its contemporaries, the Samsung Galaxy Note 9 and the iPhone XS. Huawei, prior to this launch event, has actually been poking fun at their rivals, confident in what they can deliver.

Huawei Mate 20 has the Kirin 980 chip, the first 7-nanometer chip to be announced to the world. Apple’s new iPhones also sport a 7-nanometer chip, but they announced theirs later than Huawei. With the Kirin 980, Yu shows charts showing how much faster the Mate 20 is in launching apps. He also showed how much longer the Mate 20 retains performance over time, with the Galaxy Note 9 showing more performance decay over 18 months than Huawei’s own.

The Mate 20 Pro is also said to last up to 30% longer than the iPhone XS and Note 9, with its 4200 mAh battery. Yu says that this is the fastest charging Huawei phone yet, charging up to 70% of the battery in half an hour, with a charging power rated at 40W, faster than any of the phones they’ve introduced before.

The Mate 20 phones will now also support wireless charging – the first Huawei phones to do so.

Perhaps what drew some of the loudest cheers of the night was the phone’s wireless reverse charging. Just place the phone back to back with another phone capable of wireless charing, and Huawei’s smartphone will pass on some of its juice to the other device.

Huawei also said it connects to satellites better thanks to the phone’s machine learning satellite selection technology. Huawei demonstrated this by having a person run around a dense neighborhood using 3 phones – the Mate 20 Pro, iPhone XS, and Samsung Galaxy Note 9. In the end, it was shown that the Mate 20 Pro had the most accurate tracking of the path that the runner took.

The phones will launch with the latest Android version, Android 9 Pie, but will have the Huawei EMUI skin. 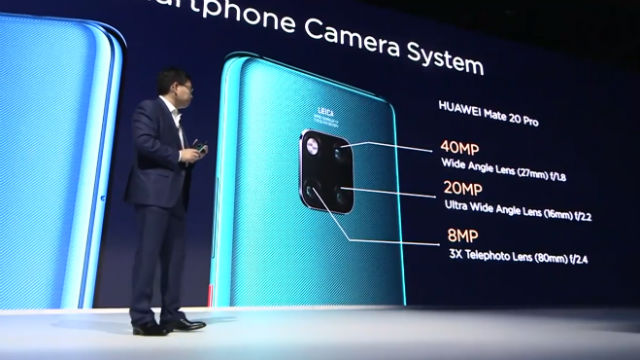 Other camera features that the Mate 20 series has include better macro photography, higher detail, and 3D depth sensing.

Demonstrated on-stage was the mapping of a panda stuffed toy. Using the phone’s camera, the toy was 3D-mapped, and then brought into the real world using augmented reality. The figure was able to move and even showed some martial arts moves before taking a photo and waving with Richard Yu.

The Mate 20 X is targeted at gamers. The screen isn’t only huge, it’s also an OLED screen for added crispness. It will be compatible with a Huawei gamepad, although it wasn’t clear whether the gamepad will be sold with or separately from the phone. Most likely, it will be a separate purchase.

The comparisons continued with the Mate 20 X, with Yu saying that the phone is able to reach higher settings than the iPhone XS and Note 9. It also has a 5,000 mAh battery, the biggest among the Mate 20 phones, and a necessary feature for heavy gaming use. Yu also touts that the X will be cooled using vapor chamber technology and graphene film, the first time it’s implemented on a phone.

Yu went so boldly as to compare it with a Nintendo Switch, saying that the X’s screen is bigger than the Switch’s 6.2-incher, and that theirs has the higher resolution: 1080p vs. 720p. Yu also says that when gaming the X lasts for 6 hours and the Switch only lasts 3 hours. 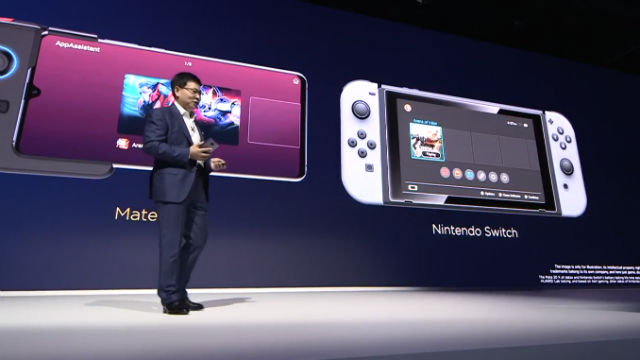 Huawei also introduced the luxury version of the Mate 20 phones in collaboration with Porsche Design. Called the Mate 20 RS, it will have leather strips running on each side of the back, with the middle portion retaining the original Mate 20 material. It will also sport more RAM at 8GB, and storage of up to 512GB. 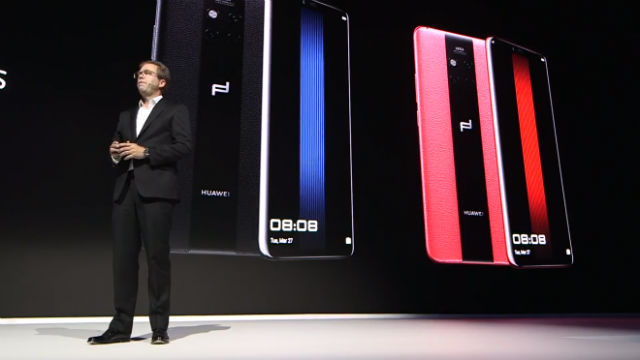 The Mate 20X will retail for 899 euros equipped with 6GB RAM and 128GB of storage. It will retail on October 26 in select regions. 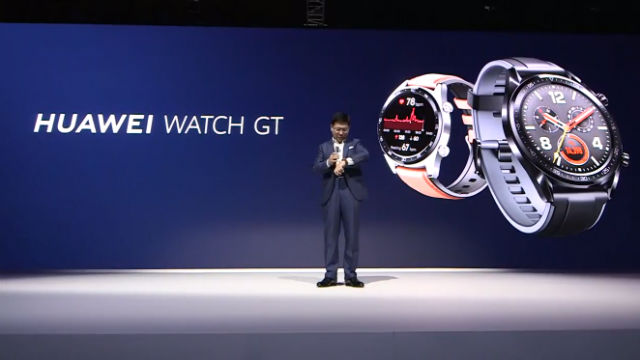 In addition to the phones, Huawei introduced some new smartwatches, the Huawei Watch GT and the Band 3 Pro. The Watch GT’s most prominent feature is that it has 2 weeks of battery life, said to be more than any other similar competing model, and more accurate heart rate monitoring than the Apple Watch 4. It is waterproof up to 50 meters too. The Sport version will retail for 199 euros while the Classic will go for 249 euros.

The Band 3 Pro is a full-screen touch smartwatch with built-in GPS, and lasts for up to 7 hours. It will go for 99 euros. No release date has been mentioned for the watches. – Rappler.com