Feb 23, 2019 11:00 AM PHT
Facebook Twitter Copy URL
Copied
Scores of prominent Pakistani journalists and activists have received email warnings from Twitter informing them their tweets are in violation of Pakistan’s laws. The consequences for press freedoms could be dire. 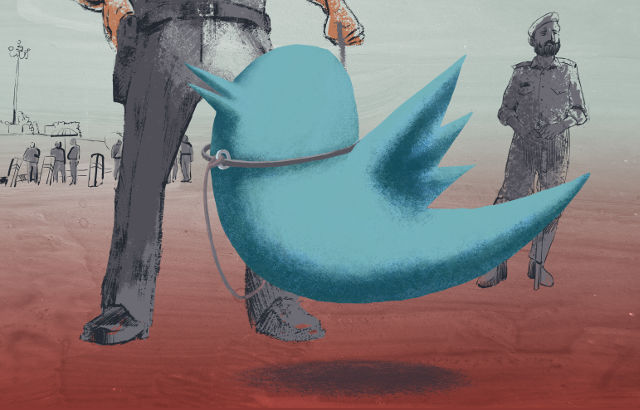 Ali Raza Abidi, a former member of Parliament from Pakistan’s tumultuous port city of Karachi, was returning home on December 25 when two unknown men fatally shot him several times. As thousands shared tributes and prayers on social media, Pakistan’s Minister of State for Interior, Shehryar Afridi, wrote on Twitter that all available resources would be used to “track down” Abidi’s killers.

Mubashir Zaidi, a senior Pakistani broadcast journalist, quoted the minister’s tweet and asked what had happened to the investigation of another murder: Tahir Dawar, a police officer who was abducted from Pakistan’s capital, Islamabad, last October. Dawar’s dead body was later found in Afghanistan and bore marks of torture. Zaidi commented that Abidi’s murder, like that of Dawar’s and several others, would remain unsolved.

Only a week after sending his tweet, Zaidi received an email from Twitter’s legal department. He was informed that his tweet was in violation of Pakistan’s laws.

“Twitter has not taken any action on the reported content at this time. We are only writing to inform you that content posted to your account has been mentioned in a complaint,” said the email, seen by Coda Story.

“I just asked a question from the minister, just like any journalist would do,” said Zaidi.

He was left wondering exactly which law had been violated by his tweet. “No idea who is the complainant and how it violates Pakistani law,” he wrote on Twitter.

Zaidi is not the only person to have received such an email. While no one keeps records, scores of prominent Pakistani journalists and activists – including those who are living abroad and those who are not Pakistani citizens but of Pakistani heritage – as well as other activists who have no connection to the country have also received the same email warnings from Twitter.

Twitter has become a major platform for political debate in Pakistan over the last few years. From the government and the opposition to the military and rights-based groups, Twitter acts as the primary platform for breaking news, opinion and contesting narratives.

After the local and international media were effectively banned from covering the Pashtun Protection Movement – an anti-war, human rights movement based in northwest Pakistan which has come under heavy scrutiny from the government and the military. Its organizers have used social media, particularly Twitter, to sidestep censorship and broadcast their protests.

In an email statement, a Twitter spokesperson said many countries have laws that apply to content posted on the platform. “In our continuing effort to make our services available to people everywhere, if we receive a valid requests (sic) from an authorised entity, it may be necessary to withhold access to certain content in a particular country from time to time,” the statement read. The spokesperson did not confirm whether any content had been withheld so far.

Naila Inayat, South Asia correspondent with the Berlin-based Associated Reporters Abroad, also received a similar email from Twitter on November 3, 2018. She had posted a meme comparing the Pakistan military’s surrender to Indian forces in 1971 — which led to the creation of Bangladesh — with the government’s dealing of Tehreek-i-Labbaik Pakistan, a far-right Islamist party accused of inciting hatred and violence against religious minorities.

Inayat received the warning email only a day after she tweeted the meme. “Being a journalist working in Pakistan, I was really scared,” she said. She deleted her tweet.

Human rights workers and journalists have reported an increase in threats and violence in an atmosphere of deteriorating press freedoms in Pakistan. In a detailed report last year, the Committee to Protect Journalists wrote that Pakistan’s military was responsible for “encouraging self-censorship through direct and indirect methods of intimidation, including calling editors to complain about coverage and even allegedly instigating violence against reporters.”

“Under the excruciating circumstances that journalists are facing in Pakistan, I felt extremely unsafe and kept wondering which law I had violated,” said Inayat.

Another senior journalist, Murtaza Solangi, also received the same email from Twitter. Solangi was previously asked to resign from his position as the Islamabad bureau chief for a local news channel. At the time, he claimed that his tweets critical of Pakistan’s military establishment were the reason behind his dismissal.

A journalist from Jang Group, Pakistan’s largest media conglomerate, told Coda on the condition of anonymity that the group’s management had been continuously pressured to ensure employees didn’t tweet criticism of the military.

Jang Group faced a crisis last year when its leading news channel Geo News was abruptly taken off-air. At the time of its disappearance from the airwaves, which cost millions of dollars in lost advertising revenue, Geo News ranked as the most popular TV news station in Pakistan by Medialogic, a ratings provider.

Later, Reuters reported that the channel’s management had struck a deal with the military over their political coverage and was allowed back on air.

Geo News remains Pakistan’s most-watched television news channel with 24% of the overall viewership in the country.

Pakistan’s Minister for Information and Broadcasting, Fawad Chaudhry, denied that the government was in correspondence with Twitter over blocking content by these journalists.

“These journalists are insignificant,” he said in an interview. “No one knows them in Pakistan, so why would the government care what they say on Twitter?”

Only six months after Prime Minister Imran Khan’s victory in the wake of controversial elections, his new government has come under criticism for its treatment of journalists. In the first week of January, journalists boycotted the press conference of a minister over his harsh response to a reporter’s questions.

Similarly, Khan’s party, Pakistan Justice Movement, recently attacked The Economist on Twitter over an article critical of the country’s military. The Economist is “running sponsored articles attacking the entire state of Pakistan… puts serious questions on whether It’s the economist hiring authors or authors hiring the economist to do propaganda against Pakistan,” the party tweeted.

Chaudhry repeated that denial on Twitter when Reema Omer, a legal advisor working with the International Commission of Jurists, also received an email from Twitter on January 21 over her tweets discussing a possible extension to military courts in Pakistan. The courts have come under severe criticism over their alleged violation of fundamental rights.

A Pakistan Telecommunication Authority spokesperson stated it was not responsible for communicating with Twitter, a claim which digital rights activists contest.

Nida Kirmani, a Pakistan-based sociologist and a professor at Lahore University of Management Sciences also received an email from Twitter on January 21. One of her tweets included a photograph of her standing next to Manzoor Pashteen, the chairman of the Pashtun Protection Movement (PTM). Kirmani is one of several academics to openly support the Pashtun Protection Movement.

“I am not under any major duress at the moment,” Kirmani told Coda. However, she said it was “a message from certain powerful sources”.

Nighat Dad, director of the Digital Rights Foundation Pakistan said Twitter’s processes are not transparent. She said that all of those who have received emails from Twitter have one thing in common: they are extremely critical of Pakistan’s security establishment. “We have been contacted by many journalists and activists, all confused over these extremely vague warnings, wondering whether they should be worried,” she said.

“Upon receipt of requests to withhold content, we will promptly notify affected users directly,” the spokesperson said, adding, “The practice of notifying users is part of our commitment to transparency and empowerment.”

Some of the journalists and activists who have received these warnings are now living in exile after threats to their lives. Ahmad Waqas Goraya, a blogger who was abducted in January 2017, received an email on October 5 saying that his Twitter account was in violation of Pakistan’s laws. Goraya, who now resides in the Netherlands, had said that Pakistan’s security agencies abducted and tortured him for running a satirical Facebook page.

Gul Bukhari, a vocal critic of Pakistan’s current government and the military establishment who was briefly abducted in June last year, also received a notification from Twitter on November 10. Similarly, former France 24 correspondent in Pakistan, Taha Siddiqui, had his account briefly suspended after an email from Twitter. Siddiqui reported last year that he escaped an abduction attempt in Pakistan. He now lives in Paris.

Twitter’s determined approach to policing content can be traced back to August last year when the company was threatened with a ban in Pakistan over its non-compliance with government requests to block offensive material. “Out of a hundred requests from Pakistan to block certain offensive material, roughly five per cent are entertained. Twitter ignores all the remaining requests,” a senior official at Pakistan Telecommunication Authority, an autonomous regulatory body, told the Senate.

According to Twitter’s transparency report, the platform received 243 removal requests from the government during the period of January 2018 to June 2018. The compliance rate, according to the report, was 0%.

Farieha Aziz, co-founder of Bolo Bhi, a Pakistan-based internet advocacy and research organization, praised Twitter for not complying with the government requests. “It is a standard practice for Twitter to notify the users over their content,” she said, adding, “but in the context of Pakistan, where the current political environment is extremely hostile towards free expression, these emails can be perceived as threatening.”

Analysts also worry that the country could move further towards authoritarianism under Imran Khan, who is believed to have close links to the military. Recently, the government announced a new media regulatory body which would also have powers over social media, along with print and broadcast.

“The blatant bias of Dawn against PTI (Khan’s political party) has now come out in the open. So much for Dawn’s neutral and liberal credentials! Complete farce! Full marks to Stevan Sackur for exposing Dawn in his BBC HardTalk interview,” he tweeted, referring to an interview with Dawn CEO Hameed Haroon with BBC’s HardTalk interview program where Haroon had claimed media in Pakistan were facing severe restrictions allegedly perpetrated by the military.

Khan’s government also launched an official “fake news buster” account on Twitter that was criticized for regularly scolding journalists over stories the government believed were fake.

Fawad Chaudhry said that the government was planning to ask social platforms like Twitter and Facebook to obtain official licenses to operate in Pakistan. “If they want to operate here, they must obtain licenses under the prevailing laws,” he said over a phone call.

Aziz said the push for local licenses for social media firms could lead to a more compliant approach to government censorship. YouTube was banned in Pakistan for three years and was allowed to relaunch only after the creation of a localized version that allows the government to demand the removal of material it considers offensive.

“All these platforms, including Twitter, are now trying to find a middle ground in Pakistan,” Nighat Dad said. “That, or they could be shut down completely.” – Rappler.com

Umer Ali is an award-winning Pakistani journalist reporting on human rights, conflict and censorship. He is currently based in the UK where he is studying for a Master’s degree as an Erasmus Mundus scholar.