PLDT on the Huawei question MANILA, Philippines – On Tuesday, March 12, PLDT signed a memorandum of understanding with Nokia to deploy next-generation 5G network technology in schools and universities, pilot-testing potential use cases and exposing the academe to the new technology.

It will be another one of PLDT’s 5G pilots, which also includes sites such as New Clark City in Pampanga, and Makati, with Nokia being their 3rd 5G pilot partner in addition to Ericsson and Huawei.

Among those 3, Huawei has been in the headlines the most recently with their long-running spat against the US, which has been accusing the company of spying and stealing tech – accusations that have seem to have run aground with lack of evidence and the possibility of trade-war agendas beyond said security concerns, and Huawei suing the US.

How is PLDT approaching the situation? Horn provided a technical explanation as to why the fear that China can forcibly take data from private companies may be unrealistic. “You cannot take data out of a network without seeing it somewhere. It’s not possible. You need to take a route of the network to transport data to whatever country you want to transport it too. And that’s exactly what we are doing. We tighten down on these things – we’re watching that nothing goes out.”

That means that, according to Horn, telcos have some ability to monitor the data coming in and out of their network. If they are vigilant and that they are able to indeed “tighten down,” it may be possible for them to monitor anomalies in the system.

Horn adds to the picture: “It will never be 100% safe but it’s also not that there is an open door and some country, some president just pushes a button, and everything is being disclosed – it’s not like that.”

Alberto, on the other hand, said that they are working with multi-national cybersecurity experts to address potential issues. “We are partnering with global, known experts to address these vulnerabilities. These are Israel companies, US companies, Asian companies, Japanese companies. There is a growing coalition of orgs or experts in this field that are wanting to collaborate so that we can address the dynamic vulnerabilities.”

Alberto’s statement is more big-picture, with “dynamic vulnerabilities” being more of an inclusive term for general cybersecurity threats and more complex ones like Huawei’s. With the experts, Alberto says they  “continue to build an increasing and growing database on how to address vulnerabilities.”

CEO Manny Pangilinan has also acknowledged the issue earlier. In February, he acknowledged that “the concerns raised by the US with respect [to] 5G, I believe, are legitimate and something we are aware of, and quite sensitive… as well,” as quoted by GMA. About 60% of PLDT’s network equipment is sourced from Huawei, Pangilinan also said. 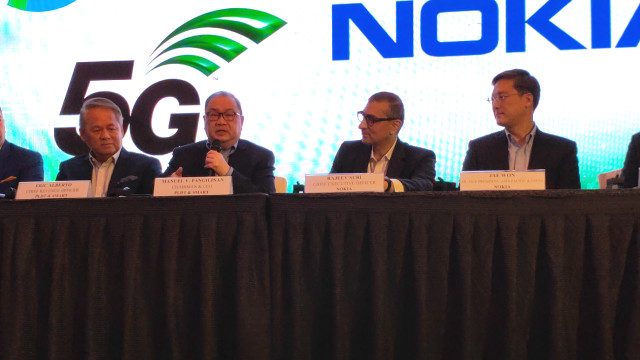 But they’re not shutting Huawei out, sharing the current expert view that Huawei is ahead of the competition technologically. They are instead looking at a multi-vendor approach, with Pangilinan naming Huawei, ZTE, Nokia, Ericsson, and Samsung as potential vendors.

Pangilinan also said a week ago that they’re working closely with Huawei to address the concerns, and to seek transparency assurances from the company.

Globe CEO Ernest Cu, on the other hand, has said that he believes the Huawei concerns are overblown “to a certain degree,” while US Secretary of State Mike Pompeo in his March visit reiterated their stern warnings about the company. – Rappler.com