Disinformation agents are targeting veterans in run-up to 2020 election 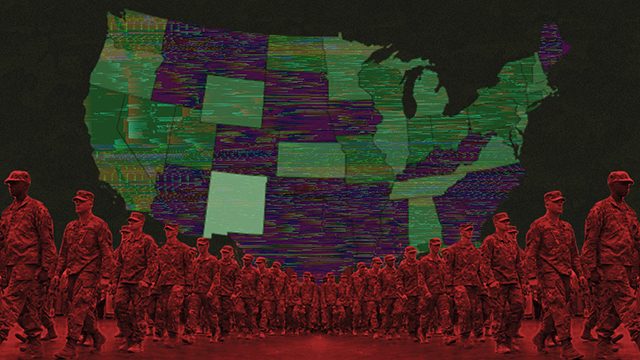 Disinformation campaigns are targeting U.S. veterans through social media, seeking to tap the group’s influential status in their communities and high voting turnout in order to influence elections and fuel discord.

Back in 2017, Facebook was just another online tool for Kristofer Goldsmith, associate director for policy and government affairs at the Vietnam Veterans of America, or VVA. He used the site to update veterans on benefits and connect servicemen. But then he found out that someone else in Bulgaria had been trying to do his job.

Goldsmith stumbled on an impersonator Facebook page mimicking the VVA page — right down to the logos. The lookalike page shared manipulated news stories and memes meant to anger veterans, all posted by a page administrator based in Bulgaria. It was also significantly more popular than the genuine VVA page, with tens of thousands of more followers.

Goldsmith, 34, is a veteran of the Iraq War. “Finding this stuff made me feel that I was back in the fight against a real foreign entity that’s attacking the very thing we swear to protect.”

Veterans present an ideal target for foreign actors. In addition to their social status and voting rate, veterans are also more likely to run for office and more likely to work in government than any other demographic.

Facebook kept recommending more veteran and military-themed pages to Goldsmith, leading him to discover an entire genre of disinformation that specifically targets veterans, U.S. servicemen, and their families.

“If they target veterans they have a cost effective way of targeting people that are likely to end up in government, with access to servers that can be comprised,” Goldsmith said. “What surprised me are the things that happened in plain sight.”

The congressional probe into 2016 election manipulation identified veterans as one of the groups micro-targeted by the Russian government. U.S. counter-intelligence officials warned of China’s “super aggressive” effort to recruit spies through fake accounts on LinkedIn last year. But until Goldsmith published a report in September specifically looking at disinformation and the military veteran community, no one has thoroughly researched the problem. As chief investigator at the VVA, a congressionally-chartered nonprofit, Goldsmith is the only investigator at any veteran organization in the U.S.

“Americans are still sort of amazingly unaware of the risks they face in cyberspace,” said James Andrew Lewis, who directs the technology program at the Center for Strategic and International Studies in Washington D.C. “We’ve spent the last 25 years thinking about how to protect critical infrastructure, water plants and electrical plants. And it turns out that wasn’t what the Russians were interested in. They were interested in hacking our brains.”

“You’re looking for an audience that’s both susceptible and influential,” said Lewis, identifying those who “have a grievance, that may have a shared experience, that may be emotionally vulnerable.” I spoke with Goldsmith on the phone as he was commuting from New York City to Washington D.C., a recurring trip between his full-time studies at Columbia University and working at the VVA, and a separate nonprofit he founded, Higher Ground Veterans. His work in Washington is closely tied to his own experience returning from Iraq in 2006 at the height of the war and living with undiagnosed PTSD. He attempted suicide the night before his deployment to Baghdad in 2007. The army wrote him up for missing his flight and gave him a less-than-honorable discharge, which he succeeded in upgrading to Honorable last week.

It’s no wonder some veterans develop a “susceptibility to conspiracy theories,” said Goldsmith. The online messaging repeatedly pushed content meant to drive distrust, even seeking to dissuade veterans from accessing Veteren Affairs hospital services, one of the most comprehensive healthcare systems in the world.

“You’re repeatedly hitting them with this information,” he said. “That stress can agitate mental health issues.”

Some of the pages and fake accounts in Goldsmith’s report solicited donations and were clearly financially motivated, others didn’t, but more often there was a mix of both. Facebook identifies the country of origin for page administrators with more than 110,00 followers, allowing Goldsmith to tally up at least 32 nationalities running the pages, from Vietnam to Argentina with some page ownership split between multiple countries. His report looks at a range of other platforms including LinkedIn, Snapchat and Twitter.

Goldsmith was able to work with Facebook’s security team to take down the imposter VVA page managed from Bulgaria and the dozens of others that he identified. The total followers of those pages were over 24 million as of October 2018.

“Once I got above 20 million what’s the point of counting anymore. It’s just tremendous, tremendous impact,” he said.

The Facebook team ultimately told him that the VVA would have to educate its own members on how to avoid being duped by fake pages and closed groups.

“For my nonprofit organization to have to take the burden off of Facebook and train 86,000 people in their 70s on how to use their platform is preposterous,” Goldsmith said.

Jim Reischl, 71, is a veteran of the Vietnam War and lives in St. Cloud, Minnesota, about an hour outside of Minneapolis. He wasn’t surprised to read that Russia and other countries were targeting veterans with political propaganda. “A number of vets where I live eat it all up,” said Reischl. “In a way it makes me angry, but I can only do so much. Which is to stick to what I always believed.” In Goldsmith’s report there’s a list of a number of action plans for addressing the systematic problem. For starters, Facebook can reveal the country location of all page administrators, issue green verification badges for veteran groups and those claiming military service, scan Facebook with AI for imposter pages using legitimate logos and watermark known propaganda — such as known Russian propaganda memes — so that users are aware of what they are sharing.

But ultimately the way the other impersonator pages surfaced is telling: Facebook’s recommended search feature led Goldsmith to an impersonator VVA page. From that first fake page, Facebook’s algorithm continued pushing other fake pages to him in its recommendation sidebar. All of the pages had soaring engagement rates from content spread organically, meaning the posts were not promoted through paid boosts but spread just by popularity. In other words, Facebook was working according to its design and underlying business model: not as an arbiter of identity and truth, but by promoting popular, engaging content.

Dr. Jennifer Cobbe, whose research at Cambridge University specializes in the recommendation algorithms used by most social media sites, explains that calls for platforms to “fix” an algorithm which spreads misleading content is missing the point.

“From Facebook, Twitter, or TikTok’s point of view the algorithm isn’t going wrong at all. They just want to keep you engaged,” Cobbe explained. “They are ultimately made to manipulate people for profit.”

Facebook is still by far the most popular community site for VVA members, serving an important role for many aging or disabled vets as a “window to the world,” Goldsmith said. “It’s a reason to wake up in the morning. Facebook is a lifeline.” And it’s the posts that can cause “real world harm to our veterans” that also do so well in Facebook’s algorithm. – Rappler.com

Katerina Patin is a multimedia producer at Coda Story.

This story has been republished from Coda Story with permission.