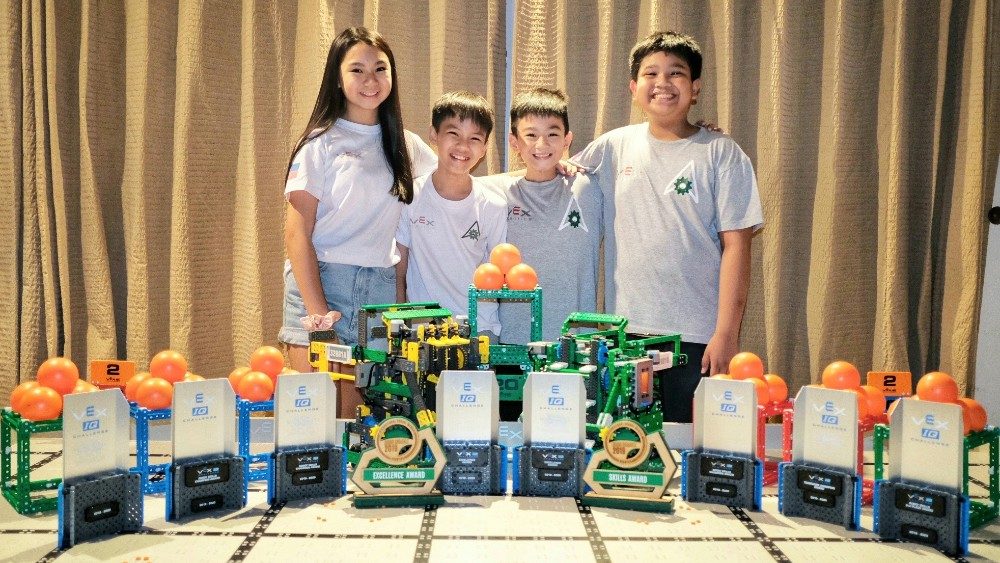 Young Filipino robotics team Arrowhead Robotics – comprised of elementary and middle school students – was supposed to fly out to Louisville, Kentucky in the US on April 26 to compete at the VEX Robotics World Championship 2020. They were coming in as a favorite, posting the top scores at competitions prior to the grand finals.

Alas, the coronavirus pandemic didn’t spare the physical event. So instead, VEX simulated the event in a virtual tournament, and one of the two Arrowhead teams – the elementary team made of 11-year-old Enrique Pioquinto and 10-year-old Gian Casimiro – came out as the winner. The team, crowned last April 26, became the first Filipino team to win the robotics competition since it started in 2007. It tasked participants with building and programming robots to solve a specific engineering challenge. Those who build the more creative, more effective design got higher scores.

The VEX contest is also considered by the Guinness Book of World Record as the largest robotics competition in the world.

Arrowhead Robotics’ middle school team, made of 14-year-old Bianca Casimiro, and 12-year-old Jose Hernandez, finished 6th in their division out of thousands of teams as well. All of the students are from the De La Salle Santiago Zobel school.

Here, we caught up with the team’s coach Gerrick Hernandez to talk about the team, how they prepared, and how they were able to reach top performance this year.

Q: How long has the team been competing?

Gerrick Hernandez: This is the second year that our elementary school and middle school teams are competing in the Vex IQ Challenge (VIQC).

Q: What has helped this team attain this unprecedented level of performance this year?

GH: Experience, preparation, hard work, constant practice, and regular discussions have helped them improve their overall performance this year. Last season, the students participated in VIQC primarily for the experience, wherein they were fortunate enough to have qualified and participated in VexWorlds 2019.

Q: Where does the Vex Robotics Challenge stand among similar competitions?

GH: REC Foundation through Vex Robotics and its Vex IQ Challenge is a worldwide robotics competition, wherein students are tasked to build, program and control their own robots to solve, and gain the highest score for a common challenge in under one minute.

Compared to other competitions that our students have participated in, they have been more engaged with Vex Robotics due to the interactive nature of the competition. They are able to drive and program their robot for the “Skills Challenges,” and they use the same robot for the “Teamwork Challenge,” wherein they are randomly partnered with another team from a different organization to gain the highest alliance score.

Q: How are the contests like? What are the criteria for winning?

GH: In summary, the objective of the game is to build and program a robot within a specific set of build parameters, e.g. dimensions and number of motors, using VexIQ parts. With this robot, the team should be able to garner the most points in one minute by placing game elements in their assigned scoring positions. This season, the game is called “VIQC Squared Away.” The competition has 2 parts:

A) “Skills Challenges,” where teams perform the same game challenge in 2 methods: 1) driving the robot using a remote controller and 2) autonomously programmed robot (no remote control). The teams are only given 3 tries each and the highest aggregate score will be used to determine the “Skills Award.” This score will also be recorded in the “World Skills Standings” for the team.

B) “Teamwork Challenge,” where teams are randomly partnered with other teams from different organizations and together they perform the same task on the same field at the same time. Usually, every team will be partnered with at least 8 different teams and the highest average score will determine the “Teamwork Award.”

There are other awards that can be won, e.g. “Excellence Award” and “Design Award,” which are determined by event judges.

Q: Have there been other Filipino teams competing?

GH: Yes, other Filipino teams have competed in local competitions, however only the Filipino teams that gain the VexWorlds qualification slots can participate in the world finals.

These qualification slots are assigned by the event organizers at the start of the season and teams compete in one or more qualifying competitions to gain these slots. In VexWorlds 2019, 4 teams from the Philippines participated and for this year, 4 teams were also qualified to participate in VexWorlds 2020. Fortunately for Arrowhead Robotics, we were able to secure 2 of those slots.

Q: What message do you hope your team is sending out with the team’s performance?

GH: I hope that through the team’s hard work and achievements they are seen as an inspiration to all of their peers who wish to go into the field of robotics. – Rappler.com