Asian fact-checkers deal with sensitivity, silencing of critics during pandemic 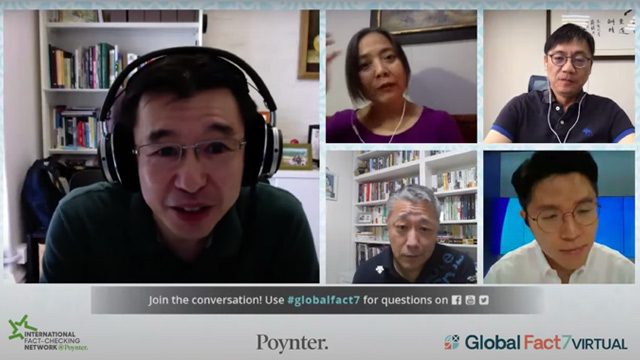 Facebook Twitter Copy URL
Copied
At the conference Global Fact 7, fact-checkers from the region tackle the country-specific challenges they've encountered while fact-checking in the time of coronavirus

MANILA, Philippines – Fact-checkers in Asia have had a difficult time doing their jobs during the COVID-19 pandemic.

In a panel titled “Beyond facts: Sensitivity of correcting misinformation in public during COVID-19 pandemic” on Wednesday, June 24, at the annual fact-checking conference Global Fact 7, 4 fact-checkers from the region spoke about the challenges they have encountered in the time of coronavirus. Global Fact 7, which was organized by the International Fact-Checking Network (IFCN), was held entirely online this year.

During a health crisis, they agreed that fact-checkers help ensure public safety at a time when disinformation and misinformation sow fear, hate, and panic.

In the Philippines, Rappler’s Head of Research, Partnerships, & Strategy Gemma Mendoza said that the proliferation of false claims during pandemic has moved the government to push for a provision against “fake news.”

However, instead of deterring the spread of disinformation about the coronavirus, the provision led to a number of citizens being questioned for posting not necessarily false claims but criticisms against the government’s response to the crisis.

“What is worrisome is that a number of official government pages have either directly circulated or amplified pages that circulated false claims,” Mendoza said.

Rappler, which has been part of the IFCN’s CoronaVirusFacts Alliance since January, has published at least 116 fact checks related to COVID-19. (READ: Over 6,000 false claims about COVID-19 debunked by global fact-checking alliance)

Mendoza also mentioned that there are claims that red-tagged a journalist, and that accused a representative of one of the partylist groups of being part of a rebel group, which the police said they will investigate.

However, it was observed that one of these false claims appears to have been posted by a page officially managed by the police.

“All of these makes it very important to connect this to the political context of fact-checking and looking into what is described as ‘fake news’ in the Philippines,” Mendoza stressed, citing how disinformation was used by the administration to attack its critics and influence the general public even before the lockdown.

Rappler itself has been facing numerous attacks since 2016 and numerous legal cases since 2018. Even at the height of the pandemic, attacks against the media have been prevalent. The major broadcast network ABS-CBN was forced to go off-air on May 5. In a move that was denounced by rights groups, business groups, and politicians alike, Rappler CEO Maria Ressa and former researcher Reynaldo Santos Jr were convicted of cyber-libel on June 15.

“The government has been proven to have this huge network of websites and pages. We’ve tracked quite a number of these groups that are promoting government messaging on supposed accomplishments of the government and attacking reports that seem to be critical of programs. Some of the posts they’re attacking are fact-checks,” Mendoza added.

During the pandemic, the government has also pushed for the railroaded anti-terrorism bill awaiting the President’s signature. For Mendoza, this is both alarming and problematic for investigative reporters, journalists, and even potentially for fact-checkers.

“What is the likelihood that reports on or corrections to what the government’s lines are could be considered inciting? And we’ve already had instances in the past, in fact, when the Palace itself accused 3 of the top investigative news organizations in the country [Rappler, Vera Files, and the Philippine Center for Investigative Journalism]…[and they] were all framed, described to be part of an ouster plot?” Mendoza said.

She was referring to an unsubstantiated claim from 2019 which then-Presidential Spokesperson Salvador Panelo said the public should believe because it came from the president himself.

Fact-checkers in Japan are facing a similar struggle.

During the COVID-19 health crisis, a member of their anti-coronavirus task force claimed that as more testing is done, more people will be found dead due to the virus. It was also during this time that the government limited the capacity for COVID-19 testing but didn’t explain why.

FactCheck Initiative Japan (FIJ) Vice Chair and Chief Editor Yoi Tateiwa said that while the claim was made during a press conference, media groups didn’t ask for evidence but instead ran the story.

“I find it very troublesome…. We started doing the fact-checking. We asked his name…. What’s the evidence? We checked every country and compared. We wrote the story that it’s not true and journalists were attacking us,” Yoi Tateiwa said.

Other journalists fired back and told them that they can criticize the government but not an individual believed to be a man of science.

Tateiwa was concerned that media organizations in their country were not enthusiastic about fact-checking coronavirus claims. This was gradually addressed as his group translated their own fact-checking efforts to English to appeal more to the international community.

He emphasized the importance of collaborations among various agencies when it comes to fact-checking and warned that fact-checkers should be careful and tough against possible manipulation by the government.

With the looming cases of coronavirus in Korea, the JTBC Korea fact check team leader Gahyeok Lee  highlighted how fact-checking has helped campaign against the discrimination of individuals suspected of having COVID-19.

For instance, the lesbian, gay, bisexual, transgender, and queer (LGBTQ+) community has been under attack following a media organization’s report claiming that a COVID-19 confirmed person went to a gay club in Itaewon.

The report has triggered negative reactions online “with comments like the confirmed cases will grow since gays behave irresponsibly and that gay is the reason for the spread of COVID-19 in Seoul [and] Itaewon.”

Lee admitted that the media has helped sow hate through these accusations.

JTBC responded to the misleading and incorrect information by criticizing the media organization that released it.

“Therefore, we came to conclusion that reporting [the] LGBTQ community in Itaewon as [a] confirmed case is clearly wrong. To be precise, we approached the issue as [criticism] on certain news reports or kinds of campaigns, [which we found] better than fact-checking on certain information,” Gahyeok Lee added.

This move has helped to lessen discrimination, and anonymous testing for COVID-19 was then pushed for.

Fact-checking as a solution

Lee also shared that when fact-checking, they’re careful not to share all of an individual’s details or other factors that may cause them harm.

Lee talked about a claim from a video that was filmed in Daegu, where a woman was blocking a car on a traffic-heavy road. A rumor spread online that she was a COVID-19 confirmed patient who was escaping from the hospital.

Daegu was then criticized for not controlling their confirmed patients.

“The video caused confusion and chaos. We evaluated [it] and it was not true,” Lee said, emphasizing that the person in the video has a psychiatric condition and the accident was shot on the day that patient was sent to her family from the hospital.

In order to say that this person did not have COVID-19, they would have had to say that she was suffering from a mental illness. However, this was also a serious matter that would violate her human rights.

“After discussion and consideration, rather than giving viewers the perfect detail, we decided to give less [sic] details. The best practice we can do was to say the news report claiming the COVID-19 confirmed women had escaped is not true,” Gahyeok Lee stressed.

Though fact-checking has been challenging in Korea, he said that it has become a way to fix the problem of sowing hatred and panic in the community.

“Those communities or neighborhoods being accused can easily become the target of hate and the media clearly helped the hatred grow. I believe fact-checking can help fix that problem,” he added. – Rappler.com