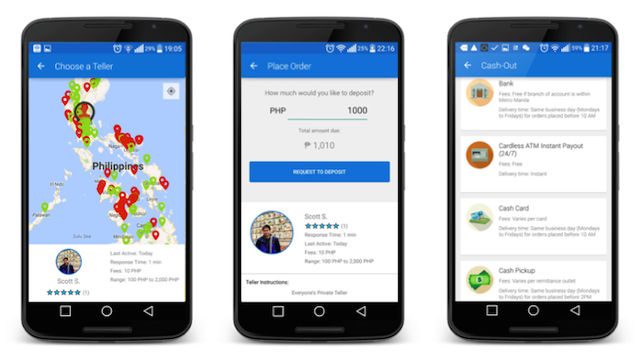 Facebook Twitter Copy URL
Copied
A new service on its Bitcoin wallet called 'Teller' turns anyone with a smartphone into an ATM, where you can deposit your money. Think Uber for banking.

MANILA, Philippines – Philippine Bitcoin startup Coins.ph has come up with a way for you to move money without having to deal with a bank.

A new service on its Bitcoin wallet called “Teller” turns anyone with a smartphone into an ATM, where you can deposit your money. Think Uber for banking.

Here’s how it works: say you need to make a deposit to send money to a relative. To do this, you would open your Coins.ph wallet and find a teller near you using your GPS. Tellers can be people or small retail establishments like convenience stores. Upon meeting, the teller collects your cash and transmits the equivalent amount in bitcoins into your mobile wallet, while charging a small fee for processing.

With your wallet topped up, you may remit bitcoins to your relative through your relative’s Coins.ph wallet if he has one, or his preferred mode of cashing out. Remittances can be cashed out through bank deposits, cardless ATM withdrawals, door-to-door delivery by logistics firms 2GO and LBC, or cash pick-up at partner pawnshops and remittance centers.

Tellers dictate their own fees or the amounts they are willing to accept for deposits. The maximum amount each teller can accept will depend on his track record, says Coins.ph CEO Ron Hose.

This method of moving money is new so it begs the question of how safe the whole process is, especially since you’re handing your cash to a stranger.

Hose says Coins.ph is rolling out Teller first with existing money exchangers and retail establishments that are familiar with handling such transactions. These entities screen tellers, run identity checks on them, and train them. Soon, the technology will be extended to any retail store where Coins.ph does the screening and training. This is similar to how Uber manages its network of drivers.

Also similar to Uber, a two-way rating system lets both customer and teller rate each other following a transaction.

Catering to the unbanked

Hose says the new service provides basic financial access to unbanked individuals. These people may be poor, live far away from bank branches, or don’t have proper documentation to open bank accounts.

“Over a third of municipalities in the Philippines still don’t have any form of banking facilities and even in big cities, retail banks are only able to serve a small percentage of the population,” he tells Tech in Asia.

The goal is not to render banks obsolete but to provide a way for them to reach consumers they wouldn’t normally cater to.

“It costs too much to put up branches everywhere, resulting in over two billion adults who are still unbanked,” Hose explains. “We think this will augment banks in areas that are hard for them to serve. Our vision is to help the banks drive services there, not to replace them.”

Founded in early 2014 by Hose and Runar Petursson, both Silicon Valley entrepreneurs, Coins.ph’s mission is to accelerate financial inclusion in Southeast Asia through mobile and the Bitcoin blockchain technology.

Still, Bitcoin adoption in the Philippines is in nascent stages – there are only a few startups that allow for exchange of Bitcoin into fiat money.

By growing the options for converting Bitcoin, startups like Coins.ph hope to widen its adoption in the country. – Rappler.com