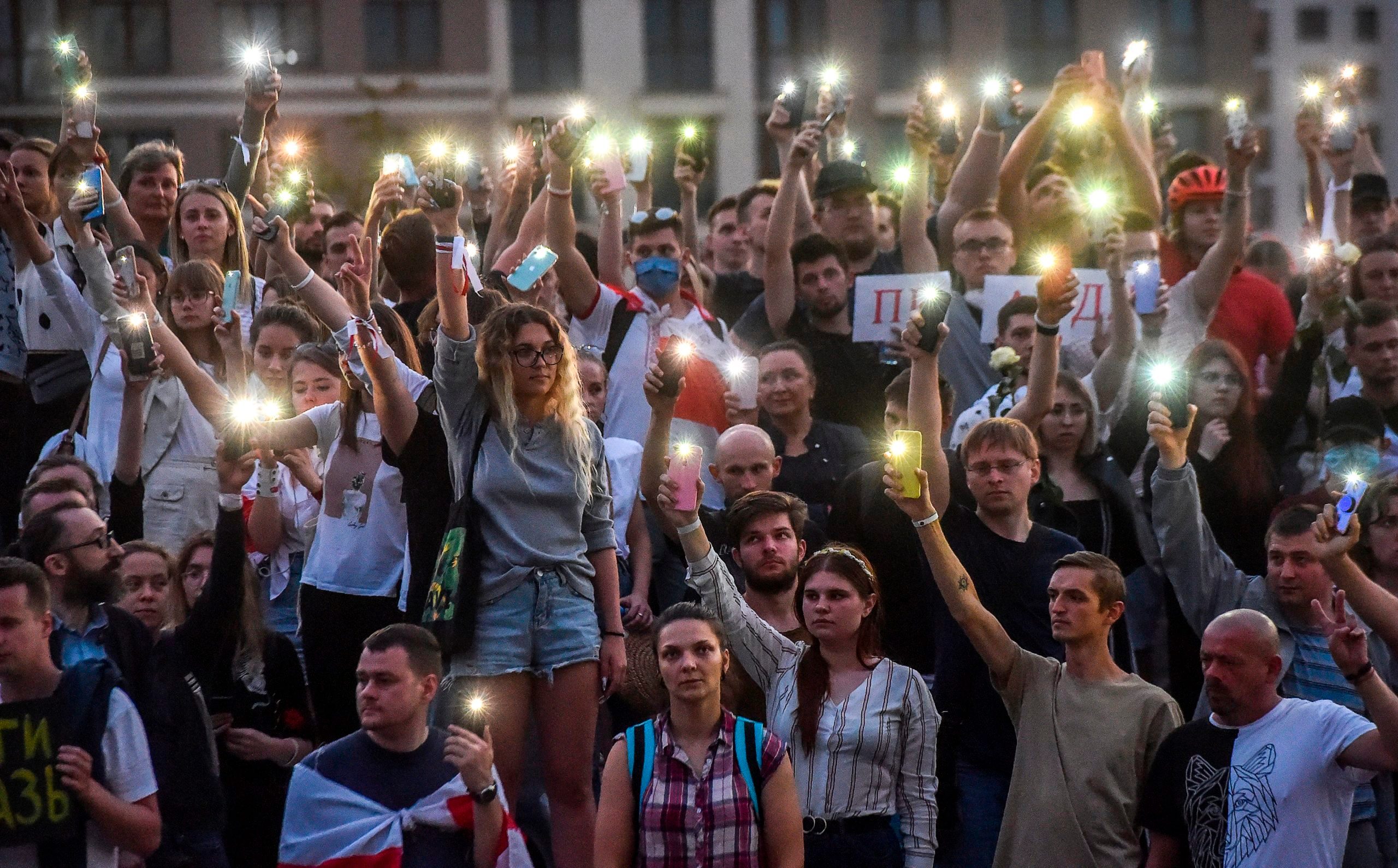 IN BELARUS. Belarus opposition supporters raise their mobile phones with flashlights during a symbolic minute of silence near the State TV and radio company during a protest rally against police violence recent rallies of opposition supporters, who accuse strongman Alexander Lukashenko of falsifying the polls in the presidential election, in central Minsk on August 15, 2020. (Photo by Sergei Gapon/Getty Images/AFP for Coda Story

Belarusian President Aleksandr Lukashenko was already shaken by the time he heard an angry worker at the Minsk Wheeled Tractor Plant shout out that he should just “shoot himself.”

A day after the largest nationwide protests in the country’s modern history, Lukashenko had helicoptered into the factory on Monday to secure support among a constituency long considered to be his base, but instead a scripted speech had been overwhelmed with chants of “resign.”

Lukashenko, a former Soviet collective farm boss, approached the worker who had heckled him. Trying to control his rage, but his voice rising nonetheless, he exploded when he saw the person standing before himholding up a mobile phone.

“Put down your phone!” he demanded.

His concern was understandable.

A week after he had officially been declared victorious in the August 9 presidential elections with a wildly improbable 80% of the vote, the country he had ruled for 26 years was convulsing in large scale protests, horrific riot police violence and factory worker strikes, all being broadcast and organized on Telegram, a telephone messaging app.

“No question, it’s a life necessity now for everyone in Belarus, because it’s the only place where we can get authentic information,” said Yevgeni Shabanov, a sales manager, who now regularly participates in protests and has sent videos of clashes with riot police to some of the most popular Telegram channels.

“In some small app, in some little channel suddenly two million people appeared,” said Barys Haretski, deputy head of the Belarusian Association of Journalists, in a telephone interview. Haretski was  speaking about Nexta, the country’s most widely-read Telegram channel. Now with 2.2 million followers, its audience has more than quadrupled since election day.

However, Nexta is just one of dozens of channels on which activists are organizing demonstrations and publishing news that their fellow Belarusians cannot access elsewhere. Telegram remains functioning in spite of a wider internet shut down that began on August 9 and continued in spurts throughout the rest of the week. Only Telegram stayed online thanks to an anti-censorship tool developed by the Russian-born founder Pavel Durov on August 10 which allowed users to circumvent the government’s blocking of internet traffic.

“The authorities have spilled blood and will not stop unless we show our will power,” read one post on the Nexta Live channel on August 18. The message was viewed by 1.4 million people and included a schedule and a map for a planned “Liberation March” to Okrestina, one of Belarus’ most notorious detention centers in Minsk.

Powering Nexta and Belarus’ other top Telegram channels is a small team of admins, who spend their time sorting through the videos and tips sent to them from subscribers and posting them to their audiences.

“It’s very stressful because every decision you make, every post you make, can impact the lives of millions,” said the administrator for a network of eight Telegram channels, including, Belarus of the Brain, the country’s second largest channel.

The administrator, who asked to remain anonymous because of security concerns, acknowledged the potential pitfalls this power could unleash, including spreading disinformation. “It can be used for good and it can be used for bad as well. It depends who’s managing what,” he said, in a phone interview.

Although Lukashenko has publicly railed against Telegram’s “bandit” channels, accusing users of “spitting” on Belarus, the authorities have failed to bring the platform under its control. More than 12 admins have been jailed, but their channels keep running thanks to team members who manage to avoid being identified.

According to Haretski, the authorities “blew it” when it came to neutralizing Telegram and online media.

“For a long time the authorities have been chasing after print newspapers while people, en masse, have been moving to the internet. You could say that independent media took over the internet. The same with Telegram,” he said.

With virtually no popular pro-government channels on Telegram, the platform largely belongs to Belarus’ growing opposition. Now, even state TV reporters have left their jobs to join the nationwide strike against the embattled president.

A former major in the security services who spoke to Coda Story via messenger apps on the condition of anonymity said that while officers in the Belarusian KGB — the agency still bears its Soviet-era name — monitored opposition groups online, the majority of resources were spent on preparing riot police in the run-up to the election.

“Half a year ago we started preparing the guys morally. We were brainwashing them about how important it is to preserve the regime and that there is no other path,” said the 29-year-old, who was expelled from Belarus this summer and now lives in Poland.

He added that the security services had been preparing for protests of 7,000 people at the most, not the 500,000 who gathered in Minsk last weekend.

Many who continued protesting this week showed up to demonstrations with photographs of Belarusians who had been detained and beaten by police. Pictured after their release, some stood in their underwear, revealing bodies covered in bruises.

Zhenya, a 23-year-old from Minsk, was arrested and detained when coming home from a neighborhood shop.

“For six hours we had to stand on our knees with our heads to the floor,” he said, in a phone interview. “No toilet or water. They would say, ‘Those who want to go to the toilet, go where you’re standing.’”

Later, Zhenya said a police chief walked in with officers holding batons and starting yelling: “‘Who is the best president in the world?’” Everyone stayed silent, so they began to beat us.”

“They put us on top of each other, like in a game of Tetris, and then the officers sat on top,” said  Artyom, 23, in a  phone interview. He was arrested while in a grocery store with his girlfriend on August 11. “When the last person entered our cell, he got so scared he shat himself. One man had an epileptic attack.”

Waiting outside the detention centers were small armies of volunteers who had come to document the thousands of cases of police brutality and bring medical aid to those who needed it. These gatherings had all been organized on Telegram. – Rappler.com

Glenn Kates is a journalist and media consultant. He is the former Managing Editor at Current Time, the Russian-language digital and TV network of Radio Free Europe/Radio Liberty.