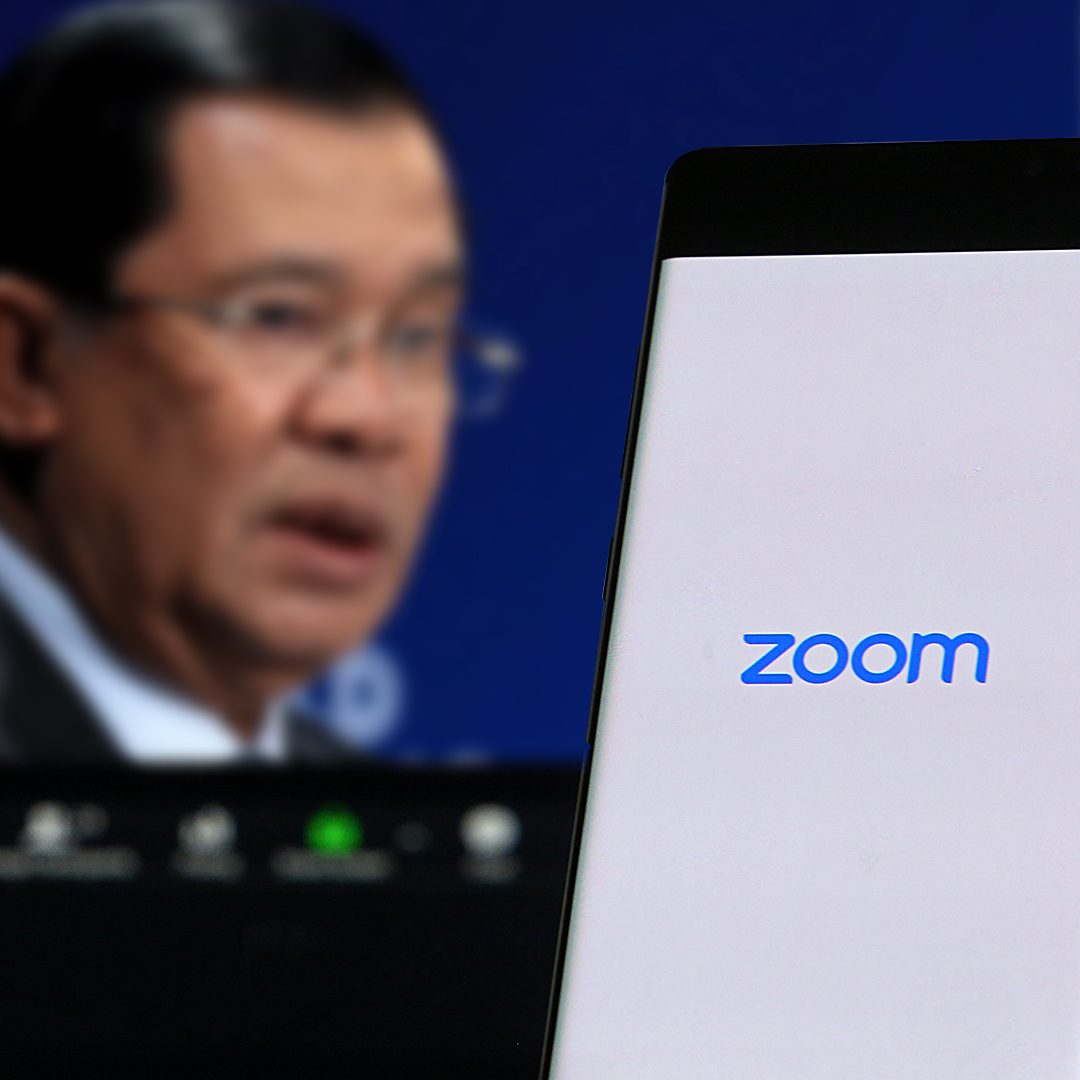 Facebook Twitter Copy URL
Copied
Hun Sen’s government, which has shown little hesitation in quashing any sign of dissent, is taking control of user activities on the internet
As published byRest of World

When Cambodia’s banned opposition party held a Zoom call on September 9, they hardly expected it to be personally infiltrated by the country’s prime minister.

Appearing abruptly and interrupting a speaker, the uninvited guest, Prime Minister Hun Sen, chimed in to warn virtual attendees that their communications were being monitored.

“I have been listening, and have entered to listen many times already,” the 69-year-old authoritarian leader said, on a video recording of the interaction that circulated widely on Facebook. For about 12 minutes, the prime minister lectured a senior member of the opposition, Long Ry. He wagged his finger as he demanded his rivals, who he had driven into exile, stop insulting him if they ever expected to be allowed to return home.

The events that followed were equally disorienting. A longtime spokesman for the ruling Cambodian People’s Party, Senator Sok Eysan, initially attempted to explain that the clip was manipulated from old video footage. After Hun Sen publicly referred to the incident on Facebook—his favored platform—Eysan reversed course.

He said that the images were real, but that the opposition had recently spread misinformation to imply that the government was reaching out to them. “Tricks,” he alleged, “to confuse … domestic and international views.”

“This entry was just to give a warning message to the rebel group to be aware that Hun Sen’s people are everywhere,” Hun Sen wrote on Facebook. “Please be careful, and don’t do any activities against the national interest.”

Hun Sen, a former Khmer Rouge soldier, has held a tight grip on the prime ministership of Cambodia for 36 years. While he has embraced social media, posting multiple times a day and engaging with commenters, his government has shown little hesitation in quashing any sign of dissent, last year detaining and interrogating at least 30 people over online content-related charges.

Hun Sen’s internet oversight powers are expected to increase next February when a “national internet gateway” (NIG) comes into effect, which will route all internet traffic through a single point and task a state-appointed operatorwith blocking certain websites and capturing users’ metadata.

Six months ahead of the gateway’s launch, nonprofit and activist groups are warning that little has happened to dissuade them from their worst-case fears: that the gateway will be used to block critical content, similar to China’s so-called Great Firewall. Opposing voices in the business sector, meanwhile, are treading lightly. Others still have attempted to calm concerns, saying the technology’s capacity to regulate content and communications has been overblown.

Naly Pilorge, the director of the NGO the Cambodian League for the Promotion and Defense of Human Rights, said her group was “extremely worried” the gateway would be used to stifle critical comments and restrict access to information. She described the measures as Hun Sen’s “extension of control into the online space.”

The government has a history of attempting to block content by sending takedown orders to internet service providers, with mixed success. In 2018 it was revealed that the Cambodia Daily, an independent newspaper, had its website blocked by some ISPs. Voice of Democracy, a news website, has also previously been blocked. In June of this year, members of the environmental group Mother Nature were arrested and charged with insulting the king after an internal Zoom call was infiltrated.

Digital businesses remain puzzled by the policy’s lack of technical detail. Matthew Tippetts, the Phnom Penh-based founder of e-payment startup Clik, told Rest of World there was a risk the gateway could introduce latency and damage prospects for the internet economy, but added that it was difficult to judge any potential impacts because the system’s details had not been released.

“It’s important there is communication on how this is going to work,” said Tippetts, chairman of the ICT Committee for EuroCham, an association of European businesses in Cambodia, adding that they were willing to advise the government but had so far not been consulted.

But some in the sector believe the gateway will, rather than significantly impacting privacy and information access, allow Cambodian regulators to better manage internet providers.

Mike Gaertner, the founder of the Cambodian Network Exchange and co-founder of digital media company Sabay Digital, told Rest of World that the technology could not break the encryption that protects most traffic, nor get around the fact that cloud hosting presented a barrier to blocking individual websites.

“One issue is: Will this National Internet Gateway allow the government to spy on your private conversations, or block you from accessing content? And the answer clearly is no,” said Gaertner. “If you don’t share your password with people, they will be unable to intercept your communication.”

The telecom companies, which are required to send all data through the gateway beginning in roughly six months, are either unwilling to disclose their progress or have been punished for doing so. One telecom company has been targeted with harsh, random audits after its CEO partially described plans in an interview with local media, an industry insider told Rest of World. The source requested anonymity due to fears of repercussions from the government.

The person also voiced fears that the system could be used to favor more politically-connected companies over others, or require telecoms to bear the costs of connecting to the state-run hub, which could potentially run into hundreds of thousands of dollars.

“They ignored the questions raised by internet providers and said, ‘We are going ahead,’” they said. “It’s a gigantic investment that would kill any small players.”

The Cambodian Ministry of Posts and Telecommunications, which is among the departments overseeing the rollout, declined to respond to questions from Rest of World. In the past, the ministry has said it intends to be “transparent” and consult widely with experts and private institutions.

Internet usage in Cambodia has surged in recent years, particularly via smartphone. According to DataReportal, internet penetration stood at 52.6% as of January, with the number of active internet users increasing by over 1 million in the 12 months to 2021 alone. The number of mobile connections, meanwhile, reached 21.18 million — more than the entire population.

Hun Sen’s active social media presence means that the platforms are unlikely to be blocked outright, said digital rights organization DigitalReach in a June briefing paper. However, the National Internet Gateway could give the authorities more leverage to pressure platforms to remove pages, accounts or users. “Censorship and surveillance methods are likely to happen step-wise, rather than all at once,” the group said.

In the meantime, Hun Sen’s Zoombomb sends a strong message: The government is already listening in. The opposition party’s Ry told Radio Free Asia that one of his team had shared the meeting’s link and password with people outside the core members. He said the group would be happy to invite the Cambodian leader to future online gatherings.

“But morally, when people sneak a peek into our affairs, we are not happy,” he said. – Rappler.com

Bopha Phorn is a freelance reporter based in Cambodia.

Shaun Turton is a journalist based in Cambodia.