How China spies on Uyghurs in Turkey

It was May 2018 when the man first asked Nur to spy for him. The message came, as usual, via WhatsApp and was assiduously polite. Nur seemed like a good citizen, it said, but as a Uyghur living in Turkey, he must do more to prove his loyalty to China. “We see you as an educated and important person,” the next message read. “So we have chosen you for a special job.”

All Nur needed to do, the man continued, was to attend meetings of other Uyghurs in Istanbul, make inquiries about certain people and then pass the information back to him.

Nur protested that he was too busy, that he was already loyal, that he might get caught by the Turkish police. Then he closed his WhatsApp. The messages frightened him and so did the man, who was now the only link to his parents in the autonomous region of Xinjiang, home to the majority of China’s 11.3 million Uyghurs.

The messages kept coming every few days, and soon their tone changed. “You are a smart man,” one said. “You need to think about your family. You are there, but they are here, and if you refuse to do this, you could put them in a very dangerous situation.”

Nur was trapped. One of 10,000 or so Uyghurs now living in Turkey, he had thought himself free of the Chinese state. Back in Xinjiang, authorities were intensifying a crackdown on Uyghurs and other Muslim minorities that held more than a million in vast internment camps, destroyed mosques and tarmacked graveyards. China’s communist leadership describes the camps as “vocational training centers”, but they are places of indoctrination and suffering designed to eradicate religious belief.

As this repression spread, so too has intimidation and monitoring of anyone able to escape it. A number of Uyghurs now living in Turkey recounted their experiences for this article. Others confirmed they had been approached by the state but declined to meet with a journalist for fear of reprisals. All of the individuals quoted spoke on condition of anonymity and their names have been changed accordingly.

Uyghur exiles also found refuge in Kazakhstan, Europe and North America and Amnesty International China researcher Patrick Poon told Coda Story that he has heard similar stories from around the world. Many, he said, were told that if they did not return to China, their family members would be detained.

When Nur came to Istanbul to study in 2011, he spoke with his family every three or four days, either via phone or the Chinese messaging and social media app WeChat  — WhatsApp and Facebook are banned in China. WeChat is monitored by the state, but Nur’s family were secular and supported the party, so they talked freely for hours. If he went much longer than a week without calling, his parents would chide him for being distant.

Their conversations continued over years, even while authorities in Xinjiang began targeting residents who showed any outward signs of religiosity, like visiting mosques, wearing a headscarf or growing a beard. But towards the end of 2016, as a newly appointed Communist Party head in the province led still harsher policies, Nur’s mother ordered him to delete innocuous pictures of his life in Turkey that he had posted on WeChat.

Around the same time, a former classmate who had gone on to join the police messaged Nur with a warning: just contacting someone from abroad put them at risk of being sent to the expanding network of camps. Friends and family began to disappear from his WeChat contact list, likely aware of the danger. 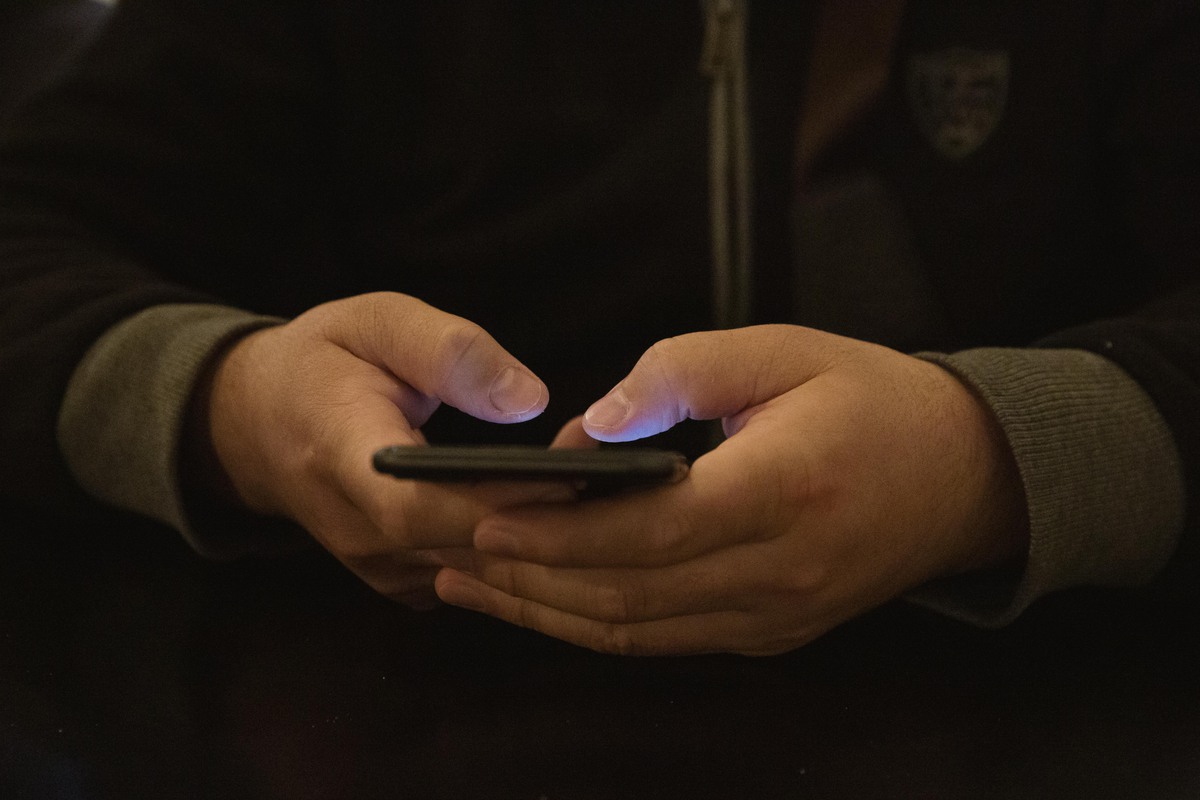 In early 2017, Nur’s parents told him they could only speak once a month, for no more than half an hour, and that he should not contact his siblings. They also advised him to shave and to cut his hair short. “I realized that there might be someone beside them or someone listening in,” Nur said, recalling the conversation while sitting in an Istanbul cafe. “So I told them okay.”

Then they told Nur not to call them at all. They added that a Chinese man would sometimes help connect them from now on, so he should accept the man’s request on WeChat.

The request came and the messages began. The man went only by a common first name and said he was in charge of security in the district Nur’s parents lived in. He wrote in impeccable Chinese and finally got around to asking a series of simple questions: When did Nur arrive in Turkey, what was his address, how many children did he have, where did he study, and would he come back to China? Nur answered, mostly truthfully.

A week later, the man, unhindered by the ban, WhatsApped him from a Hong Kong number. Nur suspected that the man had obtained his contact details from his parents. “He said ‘I am the son of your mother and now I am going to my mother’s home,’” Nur recalled. He knew that probably meant the man was one of the million of mostly Han government workers ordered to spend time in Muslim households as “family” for the purposes of surveillance and indoctrination. Nur soon received a WhatsApp video call. The Chinese man’s face was hidden but Nur heard his voice, smooth and quiet and he saw his parents. They looked happy to see him, but they told him that the man wanted him to go to the Chinese consulate in Istanbul and affirm himself as a citizen. Nur nodded, scared for them and for himself.

During this growing estrangement from his parents, other Uyghurs in Turkey were being alienated from their own relatives and friends. Abdulla, a small business owner living in Istanbul, said that his brothers, sisters and friends had also begun to delete him from WeChat. Eventually, only his parents were left and their messages went from every day to once a week and became unusually terse and unemotional.

Mehmet, who has been in the city since 2010 and has a number of close relatives in Xinjiang who have been taken to internment camps, said that even his immediate family stopped replying to messages. His WeChat history with his sister is now just a series of unanswered pictures of his newborn daughter. Again, a government-operated WhatsApp number and intermediary became the only way to contact his family, and information about his life in Turkey—his job, his children, his address—was required in return.

As well as gathering information for the state, Amnesty’s Poon added, these requests also damage the cohesion of exiled Uyghur communities, making everyone seem like a potential informer. “[Students] told me they are concerned about how some of their classmates might have answered,” he said. “It sews distrust in the community.”

There was a time when Nur did not hear from his parents for more than two months. He began calling their mobile number every day in contravention of their instructions, but could never get through. Finally, they answered. When he asked what was wrong, they told him that everything was fine, that they had just taken a trip to Ürümqi, Xinjiang’s capital city, and forgot to take their phone with them. He could not ask, and they could not tell him, but Nur suspected that during this absence, they had been held in a camp then released.

It was then that Nur started to receive demands to spy on other exiled Uyghurs. His excuses appeared to put the man off and the messages stopped for a month.

Then they began again, this time from a Russian number.

Nur’s monthly conversations with his parents always went the same way. They said his brother was rich now, his sister was doing well in her job. They told him how happy they were, and how happy everyone else in the district was. They had long before stopped saying “Allahka amanat” (“God bless you”) and always hung up with a simple goodbye.

Once Nur answered a WhatsApp video call facilitated by the Chinese man and saw only his mother. He asked where his father was.

“Show me,” he replied, but she stayed where she was.

Then Nur heard another voice, a man he did not recognize, speaking Uighur.

“You can move,” the voice said.

Only then did his father appear on screen.

On another occasion, Nur received a photograph of his parents via the Chinese man’s WhatsApp account. The image was strange, he thought. There were multiple people in the room but only his father and his mother’s faces were visible; the others were cropped out.

Each time the man facilitated a call, Nur would thank him afterwards. “You’re welcome,” the man would reply, “I know you’re very busy. Enjoy your time in Turkey and take care.”

Requests for information began again, this time the details of Uyghurs Nur knew in Istanbul. He did not feel he could refuse, so sent a short list of names both real and fictional.

In July 2019, the Chinese police contacted Abdulla on WeChat and asked — politely — about his family and his job. Then they asked for his WhatsApp number and if he knew the Uyghurs around him. In an attempt to protect himself, he deleted WeChat entirely. Soon after, his parents called his wife’s account. The police had visited their home with a message. It warned that Abdulla had been uncooperative, that he should think about his family members and that he was now on a terror list.

Mehmet, meanwhile, was contacted by numerous security operatives. One sometimes spoke in Turkish and sent him pictures of the Bosphorus and Taksim Square, which he said he had taken during a trip to Istanbul. Once, when Mehmet ignored the man for a few days, he opened the chat and found an innocuous voice message from his mother sending her greetings.

All three men said that simply by carrying a phone, they felt that they were still in the grip of the Chinese state — that the government was always watching them, able to listen in, demand that they become informers or threaten their loved ones.

“The police can contact me whenever they want and ask me whatever they want,” Nur said. “And the one thing that makes me very uncomfortable is that I always need to listen to them.” – Rappler.com

John Beck is an award-winning journalist focused on conflict and its aftermaths. His work has been published by outlets including GQ, National Geographic, Wired and The Atlantic. He lives in Istanbul.