A second wave of coronavirus misinformation is battering India 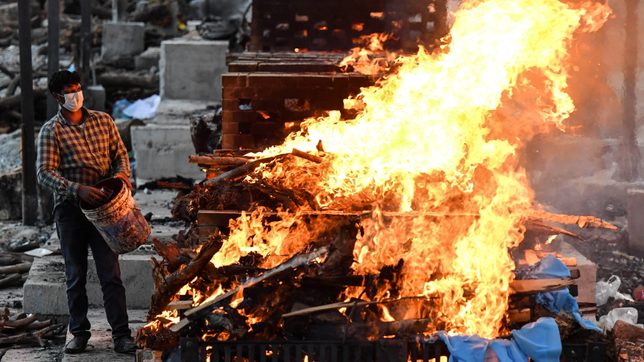 COVID-19 CREMATIONS. A volunteer cremates people who died due to the coronavirus disease, at a crematorium ground in Giddenahalli village on the outskirts of Bengaluru, India, on May 13, 2021.

“Covid is on its way out,” said Harsh Vardhan, India’s health minister, in early March. But, little more than a month later, a second wave of infections has thrown the country into chaos.

Record numbers of more than 300,000 new Covid-19 cases are being reported daily, hospitals are so overwhelmed they are unable to accept new patients, oxygen and medicine supplies are depleted, and people are dying without medical care.

Over the past few weeks, as the nation’s death toll has exceeded 200,000 people, many have taken to social media to ask for help and seek information about intensive care beds and vital oxygen supplies. Others have volunteered their time, putting in long hours to disseminate reliable information that can help desperate patients and relatives. However, online misinformation has received a corresponding boost. Rajneil Kamath of the fact-checking initiative NewsChecker says that the organization’s workload has doubled in the past month and that it is receiving dozens of false claims to debunk every day.

As with many other places in the world, India has witnessed an explosion of junk science and conspiracy theories related to 5G. One extensively shared WhatsApp message stated that radiation from cell phone towers “mixes with the air and makes it poisonous and that’s why people are facing difficulty in breathing and are dying.”

Another video, in which a doctor suggests using nebulizers as a substitute for oxygen, has had tens of thousands of views and was even shown by Prime Minister Narendra Modi on a YouTube version of his monthly radio show Mann Ki Baat. Medical professionals have said that nebulizers, which allow patients to inhale liquid medicine as a mist, are useless for increasing oxygen intake and could worsen the condition of people with coronavirus.

According to Kamath, the internet is also rife with vaccine disinformation. India’s vaccine stocks are running out and the country is struggling to inoculate its 1.4 billion population. At the same time, widely viewed online posts claim that the shots reduce the human body’s natural immunity and advise women not to get injected at certain points in their menstrual cycle. As millions of people attempt to protect themselves against the virus, fake and unproven cures are gaining renewed traction, including inhaling camphor or using steam therapies.

“A lot of claims that were viral and debunked last year came back,” Kamath said. “It’s surprising that we’re already a year into this, but even now people are circulating these things.”

Meanwhile, the national government and states across India have been criticized for mishandling the crisis by allowing thousands to attend political rallies and religious festivals, and ignoring pre-existing needs for better health infrastructure. There have also been accusations of widespread underreporting of deaths, following news stories featuring overwhelmed cremation sites, which appear to indicate that official numbers are being downplayed. – Rappler.com