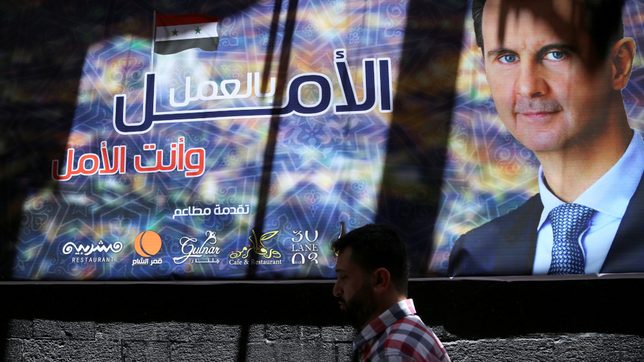 SYRIA'S ELECTIONS. A man walks past a banner depicting Syria's President Bashar al-Assad, ahead of the May 26 presidential election, in Damascus, Syria May 22, 2021.

Facebook Twitter Copy URL
Copied
After a decade of grinding civil war, President Bashar al-Assad is attempting to use the ballot to show the world that Syria is a free and functioning democracy.
As published byCoda Story

In the Syrian capital of Damascus, political campaigners loyal to President Bashar al-Assad are parading in the streets, carrying placards bearing their leader’s image and reminding people to vote for him in the May 26 presidential elections.

While the process is viewed as a sham by Syrians affected by the decade-long civil war, Assad is confident victory will be delivered by the regime, which is pushing ordinary Syrians in government-held territory to vote for him. State employees and civil servants will also be bussed to voting centers on election day in order to cast their ballot for Assad.

After a decade of grinding civil war — the United Nations stopped counting casualties in 2014, leaving the official death toll at 400,000 — Assad is attempting to use the ballot to show the world that Syria is a free and functioning democracy. The regime has announced a series of incentives to boost support, including an individual grant, equivalent to $16 for up to three million state employees, and $32 for retirees. Assad has also declared the demobilization of soldiers in the military and reserves who have served for more than five years.

Loyalist media outlets have made sure to heavily publicize Syria’s first election since 2014 — in which 51 individuals nominated themselves as presidential candidates. From that list, Syria’s constitutional court selected two government approved candidates to run against Assad.

Syrian social media is more overt in its support for the president, with pro-regime users spreading the hashtag “Sawa” (Together), which was also used in the 2014 presidential election. Assad launched a new campaign slogan on Facebook: “Hope in Work,” which is widely viewed as an attempt to promote work and business. Accounts run by pro-regime militia and security services are posting pictures and videos of people saying they are going to vote for Assad, while maintaining that the election is a win against outside powers trying to bring down Syria. On Tuesday, Twitter temporarily restricted access to Assad’s election account after activists campaigned for its suspension.

When the nation goes to the polls, voters’ ID cards will be scrutinized against electoral rolls and their thumbs stained with violet ink, to show they have cast their ballot. The 5.6 million Syrians who fled the country following Assad’s murderous crackdown on anti-government protests in 2011 and the ensuing war cannot vote, even if they wanted to — let alone run for office. However, many still have a vision of the future Syria that they, one day, hope to be a part of.

Dima Moussa was brought up in a political family who fled Hafez al-Assad’s Syria in the mid-1990s. She served two consecutive terms, from 2018 to 2020, as vice-president of the Syrian National Coalition — the first umbrella of Syrian opposition groups formed in November 2012 in Qatar. Moussa was also a spokesperson for the Homs Quarters Union, an activist group working in the western city of Homs until 2014, providing media outreach for opposition groups and gathering evidence of human rights violations in Syria.

Now living in Istanbul, Moussa is a member of the Syrian Constitutional Committee, a body formed in 2015 as part of United Nations Security Council Resolution 2254, tasked with negotiating a new constitution for Syria that would then be voted on in a referendum organized by a transitional government. So far, talks for a transitional government and a new constitution have been stalled by disagreements and continuous delays.

Moussa said that she believes that the prospect of political transition in Syria is impossible if opposition groups refuse to engage with Assad’s regime. “Who am I going to negotiate with? I have to negotiate with this side that’s actually sitting there and refusing to give up power and to allow that transition to happen,” Moussa said.

Moussa said the upcoming election mirrors the regime’s tactics over the past decade. “I don’t think anything the regime is doing now is any different from any of the propaganda or lies it has used over the last 10 years, or even before that.”

Other prominent Syrian opposition figures say this month’s election is being held to create the illusion of democracy. Mouaz al-Khatib, 60, is a former president of the opposition Syrian National Coalition. In 2012, he was forced to leave Damascus, following a campaign of harassment and repeated arrests by the Assad regime. A social activist with 115,000 Twitter followers and the former imam of the city’s revered Umayyad mosque, he is now a member of the Our Mother Syria Movement, an organization that, according to its website, seeks to “topple tyrannical rule” and “save and rebuild” the country.

Khatib, who now lives in Doha, Qatar, believes that the initial slate of more than 50 opposition candidates was designed to present Assad in a favorable light to the wider world. “It’s so nice for the regime. It shows there’s full democracy,” he said. “For sure, the regime’s security asked some of those people to offer their names.”

Besides the obvious obstacles to opposition politicians running for office — including security concerns and fear of arrest — anyone who has lived outside of the country for 10 years or more was blocked from nominating themselves. This excludes a large number of educated and highly skilled Syrians who left the country because of their disapproval of the regime. Many people active in the Syrian opposition also refuse to run against Assad, as they believe that doing so would lend both him and the electoral process legitimacy.

Following a change in election laws in 2014, the regime has increased the number of ways it can disenfranchise voters. For those outside of the country, one voting requirement is to have a valid Syrian passport with an exit stamp issued by one of the official border crossings. Considering that the majority of Syrians left the country following the outbreak of the civil war, very few qualify. Inside Syria, people living in opposition-held territories are also ineligible.

Middle East experts say the main push factor for civilians to vote for Assad is fear. “The regime is not at all concerned with anyone voting for anyone else,” said Suhail al-Ghazi, a Tahrir Institute for Middle East Policy non-resident fellow living in Istanbul. “The regime is just trying to show that this election is a new page and going to be a good thing for the Syrians.”

“As the regime will win, Iraq, Lebanon, Oman, and probably also the UAE will call the regime or send a message of congratulations for winning,” he added.

Ghazi sees parallels between the Syrian polls and the 2018 Egyptian elections, in which President Abdel-Fattah el-Sisi allowed a moderate person to run against him and used similar social media tactics ahead of the ballot.

The U.N. has clearly stated that the presidential elections are not part of the political process established under resolution 2254. It has also emphasized the importance of a negotiated political solution in Syria before free and fair elections are held. The U.S. and EU have further opposed the elections and labeled them illegitimate. In contrast, countries such as Russia, Lebanon and, more recently, Denmark, have all asserted that Assad’s Syria is a safe and secure place for refugees to return to.

In order for a political transition to take place, Moussa argues that the international community needs to formulate a workable plan. “It requires Russia and the U.S. to come together and have a common vision, some sort of understanding or agreement,” she said.

Moussa sees the elections as pointless and believes that they will do nothing to alter perceptions of Assad on the international stage. To illustrate, she pointed to the 2014 process, which Assad won, claiming 92% of the vote, and the way that Russia and Iran — the regime’s civil war backers — continued to engage in the U.N.-led negotiations to secure a peaceful transition of power within the country.

“The work of the political process continued regardless of the elections and the result, so to me it’s not going to make a difference,” she said. “I don’t think anyone is going to say we had elections that are legitimate, so we don’t need a political process now.” – Rappler.com

Tessa Fox is a freelance journalist, photographer and filmmaker focusing on war and conflict, humanitarian affairs and human rights in the Middle East.