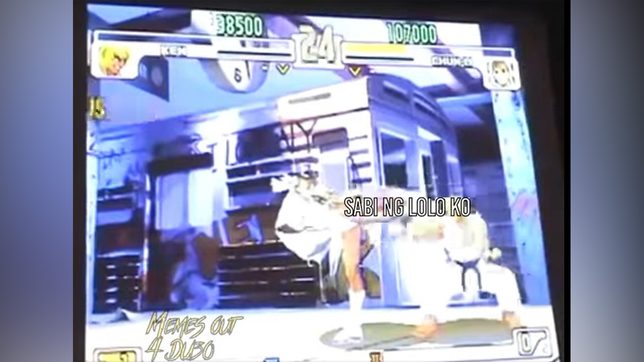 An iconic moment in fighting game esports history, the “Daigo parry,” was used in a meme that its creator says shows “how to parry a Marcos apologist.”

The meme shows the Street Fighter character Ken parrying Chun-Li multiple times before launching a counter-attack that leads to victory.

The Facebook post can’t be embedded on a website but can be viewed on this link. It was posted on September 21, the anniversary of the late dictator Ferdinand Marcos’ declaration of Martial Law, on the public group “Memes out for Duterte.”

The Daigo parry happened in a 2004 match between Japanese Daigo Umehara and American Justin Wong in the Evolution fighting game championships, which is known as the biggest annual tourney for the genre.

The moment was legendary because Daigo pulled off a nearly impossible move that required him to time a series of button presses with split-second precision in order to parry Wong’s “super” attacks. One miss of a button press from Daigo, and he takes a hit and loses. Daigo was one hit away from being knocked out. His life bar was so tiny that he couldn’t opt to use a block as a defensive maneuver as a hit, though reduced in damage, would still knock him out. The parry was his only choice, and he pulled it off.

In NBA terms, it was like hitting a buzzer-beating 3-pointer from the other end of the court to win a game in the playoffs.

Daigo would defeat Wong, proceed to the grand finals, but would lose to a rival, fellow Japanese Kenji Obata.

It’s the Daigo parry though that would be that tournament’s most memorable moment. The Guinness Book of World Records recognized the 2005 YouTube upload of the fight for having the “Most views for a competitive fighting game match on Youtube.” At the time of Guinness’ post, the video had 9 million views but has, to date, had 11 million.

The Daigo parry meme illustrating an online argument against a Marcos apologist shows Ken parrying common pro-Marcos arguments such as the “nutribun,” “infra projects,” “sabi ng lolo ko,” and “super power na sana tayo” – before being countered with Martial Law facts such as the extrajudicial killings of the time, torture victims, and the rampant corruption and theft of the regime.

Networked propaganda: How the Marcoses are rewriting history The meme finishes with the words “Marcos not a hero! Never again to Martial Law!” as the crowd erupts.

“The Marcos not a hero” phrase grew in use when Marcos, despite widespread opposition, was buried in Libingan ng mga Bayani in November 2016, through the support of President Rodrigo Duterte. – Rappler.com