THE VILLAGE. Things get really hairy in the latest installment of the horror series

Resident Evil Village launching on the 25th anniversary of the generation-spanning, survival-horror franchise feels like perfect timing. This entry is very much a culmination of decades’ worth of iterating upon signature design ideas and story tropes that are unmistakably Resident Evil.

The use of atmosphere to build an unnerving sense of tension; the intricate puzzles; the intense fight-or-flight enemy encounters; and the management of limited resources – it’s all here.

Village competently marries the more thoughtful, slow pace scares of Resident Evil 7 with the less grounded, action-heavy thrills of Resident Evil 4. It’s not one or the other here. While it tends to lean more on action towards the end, the game packs enough spine-chilling bouts of terror to satisfy both franchise veterans and newcomers alike.

Werewolves, vampires, and other monstrosities

The game picks up a few years after the events of Resident Evil 7, putting you once again in the shoes of Ethan Winters, who has now resettled in an unspecified mountainous Eastern European region with wife, Mia, and infant daughter, Rose. Unfortunately for Ethan, his house is attacked, Rose is kidnapped, and it’s up to him to find her in a village infested with werewolves, vampires, and all other sorts of crazy creatures. 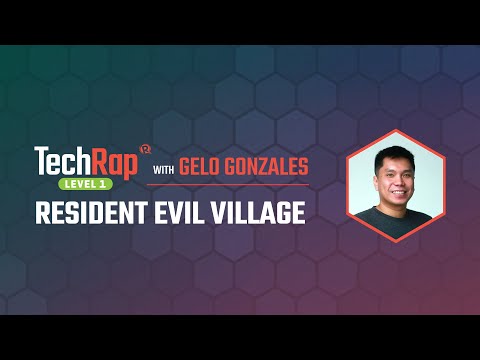 Sound familiar? Well, Village seems to share a lot of story elements with Resident Evil 4. Like in that game, the biomutated baddies you encounter here all obey a cult-like family led by a merry bunch of psycho oddities and sideshow freaks, who, as you might expect, serve as some of the game’s main bosses.

They’re not all as developed as the Baker family from RE 7, but they’re definitely compelling enough to serve as the backbone to a lot of the game’s more memorable set piece moments. Take the internet’s favorite “vampire lady,” Lady Dimitrescu, for example. Her segment takes cues from the Raccoon City Police Department bit from Resident Evil 2. She chases you around her castle as you try to find your way out of it – the same way Mr. X does in the police station.

Each of the main antagonists occupies a specific domain within the game’s map. These domains are sort of fresh takes on iconic places from Resident Evil canon – from gothic castles, dilapidated mansions, and rundown factories – with each one having its own distinctive puzzle and combat sequences. Despite some of them looking or feeling a bit familiar, the world-building potential and superb art direction here more than makes up for the “been there, done that” feeling of some of the places.

But more than that, Village’s environments are oozing with atmosphere. The candle-lit castle hallways that creak and crack as you walk; the cawing of crows in a forest being enveloped in fog; it’s the masterful use of the audio and visuals that truly make the game blood-curdling.

The map itself opens up at a nice and steady pace as you progress. While the game is mostly linear, you’ll find plenty of opportunities throughout your playthrough to crawl back to places you’ve been to before to scavenge more items. Backtracking, after all, is a typical part of any Resident Evil game, and Village is no exception.

That process is made even better by the clever implementation of the map system introduced in Resident Evil 2, where it takes note of what rooms you’ve completely cleared of pick-ups and what key goes on what door. I know some purists aren’t exactly fans of this system and might prefer to do it the old-school way of writing everything down on pen and paper. However, I personally think it doesn’t really make the game any easier and only adds some modern design sensibilities to the core franchise formula.

Village retains the first-person perspective of Resident Evil 7. Ethan still feels a little awkward to control, which only adds to the tension and intensity of combat. This is not a military shooter. And although, you have a lot of guns in your arsenal and perhaps even bullets to spare, that feeling of helplessness remains.

On higher difficulties, you’ll always just have barely enough to make it through every encounter. So that internal thought process you have of weighing whether to fight or run is still, for the most part, present here.

Most of the monstrosities you encounter in the game are pretty aggressive. The werewolves or lycans bob and weave as you fire at them, sometimes making it hard to line up headshots. They’re closer to the Ganados of Resident Evil 4 than the undead of other Resident Evil games. Some of the mini-bosses are also bullet-sponges, absorbing an ungodly amount of firepower before perishing.

This being a Resident Evil game, managing your resources effectively is key to your survival. Village features Resident Evil 4’s inventory system that lets you move your carried items around like Tetris blocks to fit them inside your suitcase. You’ll also collect lei, the game’s currency, throughout your adventure, which you can use to buy everything from guns, upgrades, crafting recipes, and ammo, among others from the Duke, who is Village’s equivalent to the merchant from Resident Evil 4.

Speaking of crafting recipes, once you find or buy a crafting recipe, you can use the components you scavenge to craft items yourself. You can craft almost, if not all, consumable items in game.

As with the majority of the games in the franchise, Village is not very long; there’s even a trophy that challenges you to beat the game in under 3 hours. It took me 12 hours to complete it on my first playthrough on Standard difficulty; and that’s factoring in how I took my time to grab as many of the collectibles as I could. But its length is not a negative in this case. I think it’s just about right for the story it’s trying to tell the pace it all unfolds in.

Besides, the game has a New Game+ feature that lets you replay your save while keeping all your items and upgrades. That’s not all, you also get another incarnation of the franchise staple mode, The Mercenaries, which has you test your combat abilities in time attack scenarios. So it’s not exactly lacking in value, if that’s your concern.

It’s worth praising as well that this is one of the smoothest launches I’ve seen in quite a while. I didn’t encounter any technical bugs or hiccups in my entire run. The game ran at a stable 60 frames per second at 4K resolution on PS5. Loading times are almost non-existent too. So hats off to Capcom for coming out with a well-polished game out of the box.

If there’s one thing I didn’t like so much from the Village, it similarly falls prey to the franchise trappings of dramatically shifting towards balls-to-the-wall action towards the last few hours. Without spoiling too much, the game throws hordes upon hordes of enemies your way and combat becomes the sole focus for a while. One sequence even looks like a level lifted straight out of Call of Duty: Modern Warfare. It just doesn’t work for a Resident Evil game; it’s not built for this type of combat.

Capcom adds another strong mainline entry to the ever-expanding Resident Evil universe in Village. The game is packed to the brim with the thrills and chills that the franchise is popular for, building on the bold, new direction that kicked off with Resident Evil 7. I was genuinely on the edge of my seat in a number of instances, mind you.

If you like what 7 brought to the franchise, this is a no-brainer. It has story beats that trace back to the earlier games, with some deep cut references and callbacks that long-time fans will surely want to dig into.

Also, if you have the option of getting this for the PS5, do consider it as the game makes great use of the adaptive triggers of the DualSense to make the different guns feel unique from each other. – Rappler.com