Facebook Twitter Copy URL
Copied
'The investigation on the incident continues as we also implement measures to prevent this from happening again,' ABS-CBN says 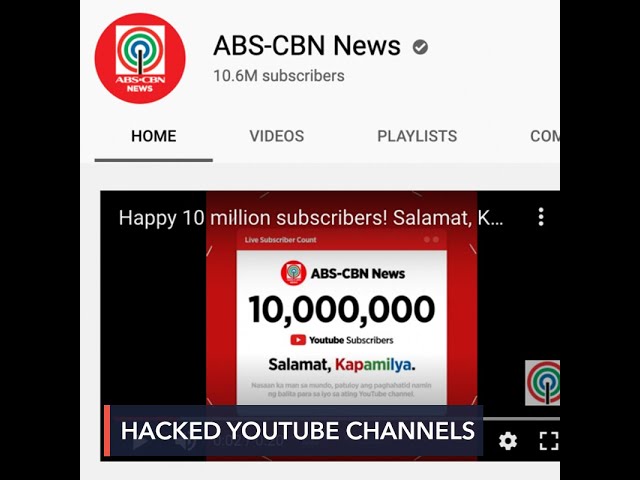 It’s a confirmed case of hacking.

For at least 9 hours on Tuesday, November 3, the YouTube channels of ABS-CBN News and the ABS-CBN News Channel (ANC) were inaccessible to the public.

“The two news channels were temporarily suspended beginning 6:30 am this morning after a hacking incident,” ABS-CBN said in a statement.

“The investigation on the incident continues as we also implement measures to prevent this from happening again,” the company said.

The two channels were restored at 3:58 pm.

Prior to the takedown of the two channels, they posted a livestream of Ripple, a San Francisco-based cryptocurrency company.

In April, Ripple filed a lawsuit against YouTube for failing to stop scammers from damaging Ripple’s brand and reputation.

According to a Fortune article, the complaint cited instances “where hackers took over the channels of legitimate creators and replaced their videos with ones advertising Ripple-related scams.”

The same article said that complaint accused YouTube of “failing to adequately restrict the spread of such videos, and even profits from them by letting the scammers pay to promote them.”

This was not the first time ABS-CBN’s digital assets encountered problems.

On September 3, its news website was temporarily down in the Philippines. It was, however, found accessible via Safari and gadgets with VPN.

At the time, ABS-CBN said it detected a “technical problem” and was looking into the matter.

ABS-CBN was forced to go off-air early May due to a government-backed shutdown.

The company has then shifted its focus on its digital and cable businesses. (READ: FAST FACTS: Other businesses of ABS-CBN)