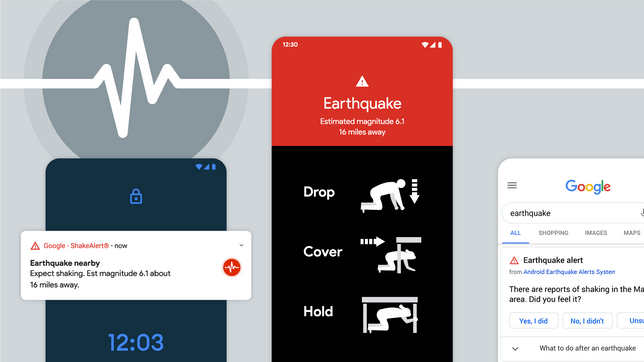 Google on Thursday, June 17, launched the Android Earthquake Alerts System in the Philippines, an Android feature that detects earthquakes and alerts people.

The system makes use of the accelerometers in an Android smartphone to detect an earthquake, and alerts people in two ways: via Search and via direct notifications on the device.

On Search, users are given the most relevant information when they search for “earthquake” or “earthquake near me.”

The device notification serves as an early warning when the phone’s sensors detect seismic activities in the area. The information that the sensors collect are sent to a Google server along with location data that Google described as “coarse,” meaning not 100% specific for privacy purposes.

Google said that the server then analyzes the information coming from many phones in the area to confirm whether there us an earthquake, where it is happening, and the magnitude. It works like a crowd-sourced network of tremor detectors made up of Android users. The alerts are optional and can be turned off.

Users can expect two types of alerts from the system, depending on the magnitude and intensity of the quake. “Be Aware” alerts pop up for 4.5 magnitude quakes or intensity level of 3 or 4 on the Modified Mercalli Intensity (MMI) scale. Google said that it also shows the distance of the quake’s epicenter to the user.

The alert uses the phone’s current volume, vibration, and Do Not Disturb settings, meaning this type of alert may be missed if the user has settings on silent.

“Take Action” alerts are for quakes with a magnitude higher than 4.5 or an intensity level of 5 and above on the MMI scale. It’s a full screen alert, and the phone plays a loud sound, ignoring personal volume settings.

“Launching the Android Earthquake Alerts System in the Philippines is part of our mission to bring helpful products and services to Filipinos. Our country, being located in the Pacific Ring of Fire, is prone to natural calamities and this update will play an important role in disaster preparedness and risk reduction,” said Google Philippines country director Bernadette Nacario

The Android Earthquake Alerts System was first introduced in the US, New Zealand, and Greece before arriving in Kazakhstan, Kyrgyz Republic, Tajikistan, Turkey, Turkmenistan, Uzbekistan, and the Philippines.