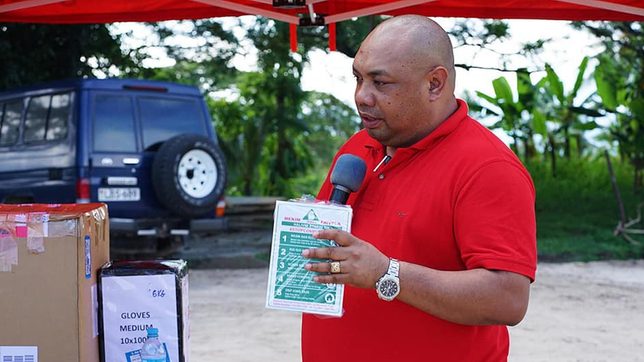 Conspiracy theories about COVID-19 and the efficacy of vaccines are so entrenched that even frontline health workers are hesitant to take the shot, Jelta Wong said at a talk with an Australian think tank that was streamed online on Thursday.

“Facebook is our biggest conspiracy theorist platform,” Wong said at the Lowy Institute talk, adding people should not rely on information on Facebook to guide their approach to vaccines.

“Facebook has a lot of influence here. They’re supposed to have programmes where they stop these types of things. Facebook must take responsibility of this and stop it.”

The company, however, has been vocal about its efforts to take down coronavirus misinformation as well as promote public health and government accounts as credible information sources.

Wong’s comments come as false claims and conspiracies about the coronavirus and vaccines have proliferated on social media platforms during the pandemic. The distrust in PNG is unusually deep-seated, local public health leaders say, hurting prospects of recovery for the island nation where infections have spiked.

It was an attempt “to show our people, especially our health workers, who (have) a series of issues about the vaccine…that we took it and we came out normal,” Wong said.

PNG, a country of 10 million that was administered by Australia before gaining independence, has so far received 8,000 vaccine doses from Australia’s supply.

India has promised another 70,000 doses, while China has committed 200,000 doses for its citizens living in PNG.

PNG had recorded just under 6,000 cases and 60 deaths by Tuesday, latest available figures show. But Australia says that tally vastly underestimates the extent of the crisis as the island does not do mass testing.

PNG has imposed a series of lockdown measures amid concerns the surge will strain its health system beyond capacity. – Rappler.com