A picture taken on September 3, 2019 shows the US multinational technology and Internet-related services company Google logo, displayed on a tablet screen, in Lille, northern France. (Photo by DENIS CHARLET / AFP) 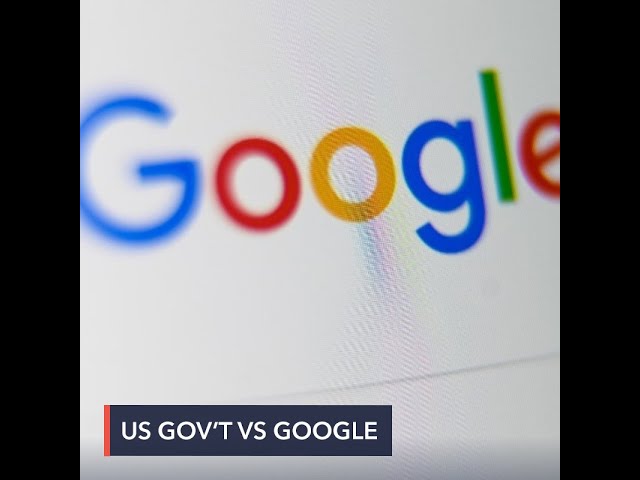 The US government sued Google Tuesday, October 20, accusing the Silicon Valley titan of maintaining an “illegal monopoly” in online search and advertising, in the country’s biggest antitrust case in decades, opening up the door to a potential breakup of the company.

The politically charged case, which could take years to play out, opens up a new battle between the US government and Big Tech with potentially major implications for the sector.

“Google is the gateway to the internet,” Rosen told reporters, citing the company’s billions in payments to device makers to remain the primary search engine.

“It has maintained its monopoly through exclusionary practices that are harmful to competition.”

The lawsuit filed in Washington contends Google’s actions shut out competitors and proposes that the court consider a range of remedies including a possible breakup, offering few specifics.

The filing calls for the court to “enjoin Google” from anticompetitive practices and consider “structural relief as needed to cure any anticompetitive harm,” which would mean structural changes to the tech titan.

Asked about how officials would seek to break up Google, Rosen deferred, saying, “the litigation will have to proceed a little further before we would want to set out specifics.”

The move comes after months of investigations by US federal and state antitrust enforcers seeking to check the power of the massive technology firm and parallel probes into other titans such as Amazon, Facebook and Apple.

Progressives have claimed the huge firms have stifled competition and worsened economic inequality. A recent House of Representatives report suggested Google and others should be broken up to preserve competition. Conservatives have accused the internet giants of political bias, although evidence has been scant.

Rosen said the Google case may not be the final one as part of its review of Big tech platforms.

“We plan to continue our review of competitive practices by leading online platforms,” he said.

A longtime Big Tech critic, Republican Senator Josh Hawley of Missouri, said the case would be “the most important antitrust suit in a generation,” and welcomed the Justice Department move.

The main unit of holding firm Alphabet, Google operates the dominant search engine used in most of the world and a variety of related services such as maps, email, advertising and shopping. It also operates the Android mobile operating system used on the majority of smartphones worldwide.

Google has been hit with big fines in the European Union for unfair competition, and has challenged those cases. The company has consistently denied claims of monopoly abuse.

Michael Carrier, a Rutgers University law professor specializing in antitrust issues, said the case could seek to force Google to remove some of its software from Android phones, and in that sense would be similar to the Microsoft case of the 1990s where customers were forced to use proprietary programs.

But Carrier said the filing just two weeks before the election “raises the possibility that political concerns are playing a role here.” – Rappler.com