Portrait of a Pretentious Game 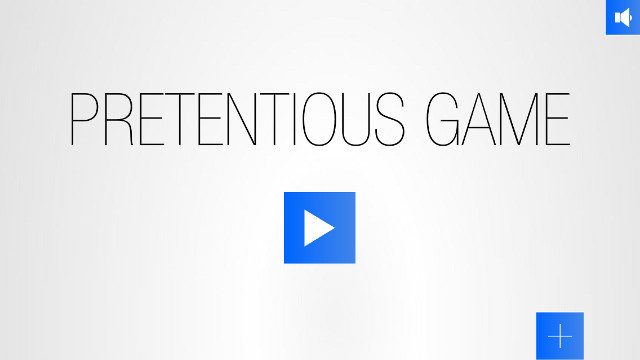 IS IT PRETENTIOUS? With simple graphics, and haunting music, Bari Silvestre tells a short story like no other.

MANILA, Philippines – Filipino game developer Bari Silvestre has a pretentious game he’d like to share with you.

In fact, “Pretentious Game” (available on both iOS and Android) is the game’s title, and it’s the most thoughtful mobile game I’ve ever had the pleasure of playing.

It’s a story of love, loss, and heartache. It’s also a platformer, a puzzle game, and a continuing tale stretching across multiple chapters.

To think that the game wouldn’t have been created were it not for one off-handed comment in a game development chatroom.

In an interview, Silvestre said the game’s first chapter was made in 4 hours back in 2012 as part of the Ludum Dare 23. The Ludum Dare is a 48-hour game development event, or game jam, where participants build games based on a theme. Ludum Dare 23’s theme was “a tiny world.”

The game was inspired by two things: a similar game, called “I Saw Her Standing There,” in which the player’s character has to be controlled to reach a girl, who turns out to be a zombie.

It was also inspired by a comment from another developer who was discussing “I Saw Her Standing There” in a chatroom. “What a pretentious game,” someone said in the chatroom, and the idea was born.

Silvestre told Rappler, “From then on I said, ‘I’m gonna make Pretentious Game.’ Minimal graphics plus love story plus narrative text plus dramatic music. That’s the formula for ‘pretentious games.'”

Watch this trailer for Pretentious Game:

The game of love

Pretentious Game’s first chapter starts simply and fulfills the requirements for a “tiny world” theme. A player controls a small, blue block as he tells the story of his falling in love with a pink block.

The game explains nothing to players about the control scheme or about how to progress at the start. Players eventually realize that the story itself is the clue to moving forward.

By deciphering what it means to “climb a mountain,” for example, the player controls his character as he jumps past a blocky hill to see the pink block on the other side. By touching the companion block, or reaching a defined end-goal to a level, the game progresses and the story is further told.

The game also has users taking leaps of faith. Some segments ask you to break what you think are established rules – the ground is black, for one – in order to complete the story. To explain some of the rule-breaking conventions would spoil some of the surprises, but rest assured, you will not go through Flappy Bird-levels of frustration should you decide to pursue this game.

Each chapter takes around 10 minutes to complete the first time, with the first chapter free and subsequent chapters requiring an in-app purchase to unlock the game and any subsequent chapters. There’s a $0.99 Friend pack, a $2.99 Fan pack, and a $4.99 Lover’s pack, with higher purchases optional if you wish to support the game. The Lover’s Pack does provide the game’s soundtrack and a background, and seems like a worthwhile purchase to support more stories.

Some gaming sites have said it is a different take on the platformer.

“Pretentious Game is deceptively simple,” notes a write-up on casual games site JayIsGames, “but ends up reaching farther and deeper than it might seem at the start. It’s easy to like it, even if you don’t particularly identify with the protagonists, as the visual style and the puzzle aspect make for an enjoyable experience.”

A TouchArcade review says it is ” another example of a game that is more of an experience than something you keep coming back to.”

When asked about Pretentious Game by PC gaming site Rock, Paper Shotgun in 2013, Bari noted its popularity on Reddit’s /r/gaming subreddit, and noted that Chapter 3’s events tie in the characters from the first two chapters “into a mixup of events sort of like the movie Crash in 2004.”

“Usually platformers are frantic and skill-based,” Silvestre told Rappler, “but Pretentious Game is a bit of a thinking puzzle platformer where sometimes you just to step back, take a look at the hints and solve it with your mind.”

Different sorts of players treat the game differently. Some people, he said, “see it as a parody to indie art games. While the romantics find it sweet. Others find it witty, and the endings aren’t the usual you’ll expect.”

According to Silvestre, the game has had a steady audience, remaining in the top 50 of the Family and Puzzle genres of the game apps with over 250,000 downloads. It is also on the front page of a number of regional App Store pages, including France and the Philippines.

Getting into games development

When asked about what a budding game developer can do to start a future in the games industry, Silvestre talked about working towards a finished product. “Developers should start small and get their games released, so they can see what needs to be addressed in their game development skills,” he said.

Silvestre added that teaming up with others is also a good way to learn. “They can also collaborate with other game developers and create a better product. Make a game they would like to play, and would like to see.”

“To get known,” he added, “join conferences and become a member of many different game dev groups online, be it forums or Facebook groups.”

Sites like GameDev.net and the /r/gamedev subreddit on Reddit provide a Philippine game developer with a worldwide base of people to throw around ideas with and get wisdom from.

Meanwhile, they can focus on honing their game creation by joining local game development festivals, becoming part of the Game Developers Association of the Philippines (GDAP) or finding work as an independent developer or as part of an established group,

At Casual Connect Europe 2014, held in Amsterdam, the fourth chapter of ‘Pretentious Game’ was released.

Silvestre said the new chapter will be about controling “the kids” of the story, who have different abilities. He also said rather cryptically, that users may end up questioning the perspective of the characters.

Whether that’s a story conceit or a gameplay mechanic, I have yet to tell. That said, I have thrown down $4.99 to continue the tale. Perhaps, if you like the first chapter, you’ll chip in to support Pretentious Game’s future development too.

Pretentious Game is available on the iOS App Store and on Google Play. – Rappler.com