Facebook Twitter Copy URL
Copied
Shipping globally this month, LG's newest phablet is not a huge leap forward but is significantly better and remains a worthy challenger in the large-screened smartphone space
SEOUL, South Korea — We have Koreans to thank for the large-screened smartphone, geeks more lovingly refer to as the phablet. Hub to smartphone giants Samsung and LG, Seoul is a city in love with freakishly-big phones – just take a subway ride and you’ll see what I mean.

For most consumers smartphone screen size is usually a preference dictated by what feels comfortable in their hand, but in Korea you won’t be hard pressed to find a phablet toting, petite, 5-foot lady sitting across from you on the train.

The obsession with larger screen sizes shouldn’t come as a surprise, after all, Korea invented the phablet. Unveiled in 2011 Samsung’s Galaxy Note was the first phablet known to man. Now in its third iteration the smartphone is one of the most popular smartphones in the world today.

On the other side of the fence, fellow Korean-rival LG has the flexible 6-inch curved smartphone the G Flex and its phablet the (Optimus) G Pro, whose second iteration the G Pro 2 arrives globally this month.

As with most product updates this year, the G Pro 2 update is not a huge leap forward in terms of innovation, but is still significantly better.

Overall improvements are noticeable; the phone took everything we threw at it. It felt snappy and responsive overall. Benchmarking scores were a respectable 28,461 on Antutu but not better than rivals Samsung and Sony whose Note 3 and Xperia Z Ultra both scored higher than 30,000.The G Pro 2 now sports a larger 5.9-inch screen that has 4 extra inches but keeps roughly the same size as its predecessor. It also sports a faster processor (2.26 GHz quad-core Snapdragon 800), more memory (3GB RAM), a better camera, and the latest version of Android (4.4 KitKat).

The G Pro 2 has the luxury of coming 5 months after its rival Note 3 but isn’t radically better. It however brings with it the pedigree of LG’s flagship the G2 – a smartphone that unfortunately doesn’t get the hype it deserves, but following just two iterations is both an impressive piece of hardware and software.

In many respects the G Pro 2 is merely an oversized G2, which in this case is a good thing.

Aside from the size difference both phones are aesthetically identical. They share the same front face with impressive edge-to-edge glass and an inner bezel that is hardly there. On its back side LG has done away with the much disliked glossy plastic non-removable back plate replacing it with a still plastic but textured back plate that is now easier to grip and less prone to smudging. 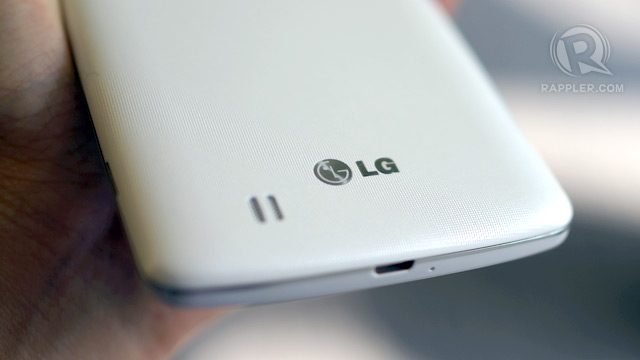 The G Pro 2 also inherits the unconventional volume rocker/power button combo oddly placed on the device’s backside below its camera. It’s a “why the heck did they do that” hardware feature that will require a little getting used to. Aside from being a conversation piece, the back-side button has its charms – including serving another purpose as a nifty notification light that glows a different color depending on what kind of notification you receive.

Side by side with the Note 3, both phones are equally matched in terms of hardware. The Note 3 is differentiated by a bundled Wacom certified stylus Samsung calls the S-Pen. Perfect for taking notes, the stylus is a great differentiator for phablets setting it aside as a completely different breed of device and not just an oversized smartphone. The camera on the G Pro 2 is also much improved. While it retains its 13MP 1/3.06-inch image sensor, it now boasts of optical image stabilization (OIS) – a feat that only LG and Nokia have managed on their smartphones. OIS has made its way to a couple other LG smartphones including the G2 and the Nexus 5 but LG takes it a step forward with the G Pro 2 with a feature called OIS+ which is basically a combination of hardware and software image stabilization. The photos we took with the device turned out good, even photos from the selfie camera were respectable. In a nod to the selfie generation LG gave the selfie cam a better f/2.2 lens and a software feature called “Flash For Selfie,” which is not necessarily a built in flash but turns the screen a bright white, enough to illuminate your face in low light.

The camera app also gets some nifty new features including Magic Focus – which gives the camera Lytro-style abilities that allow you to refocus on a subject after you have taken a photo. It’s worth mentioning that this feature is becoming a standard on most high-end smartphones today. Nokia has “Refocus Lens”, the Samsung Galaxy S5 has “Focus Select”, while the new HTC One (M8) has a second rear camera specifically for this purpose.

Also in keeping with new standards, the G Pro 2 can shoot 4K video and can also shoot 720p slow motion video at 120 frames per second.

A usual benefit of phones this size, the G Pro 2 comes with a massive 3200mAh battery that will last around 9-10 hours on normal use. LG reps are proud of their battery technology (done in-house by their sister company LG Chem) and with good measure – the G Pro 2’s smaller sibling the G2 outperforms even the larger Note 3. 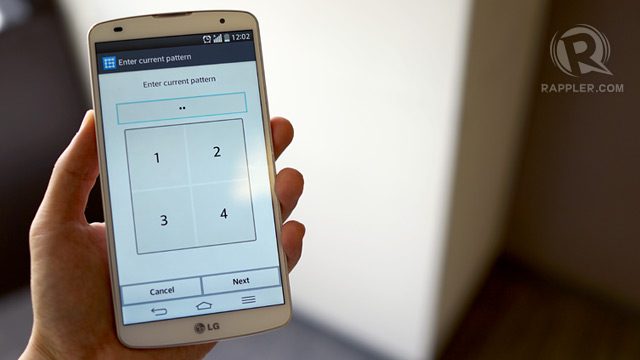 KNOCK CODE. With its oddly placed power button moved to the phone’s rear, LG had to find another way for users to turn on their displays. Their solution is an intuitive solution called Knock On – which turns a display on or off with two quick taps on the display. The feature takes a day or two to get used to but once you do, is difficult to live without it. The feature has been copied on Nokia phones running Lumia Black and the latest HTC One (M8).

With the G Pro 2, LG pushes the concept further with Knock Code where a combination of taps (anywhere between 2 to 8) unlocks the phone and turns it on. With Knock Code you assign taps based on an imaginary 4 quadrants (top left, top right, bottom left, bottom right) – taps must be in the right quadrant and in the exact order to work (don’t worry it’s not as complicated as it seems).

MINI VIEW. While 6-inch screens are great for multimedia content – they can, for people with small hands, be a pain to use. That’s why LG is also throwing in a software feature called MiniView. Just swipe across the capacitive buttons on the bottom of the screen to bring out a reduced screen about a quarter the size of the display, about the size of a 4-inch smartphone. This is perfect for a one-handed operation, making it easier to reach all 4 corners of the display and/or texting. It’s also great if you’re in public and need a little more privacy. There are only a few really good large-screen smartphones in the market today that look great, take good photos, come with great software and have impressive specs to match — the LG G Pro 2 is one of them.

Side by side with competitors, the phone stands out in terms of its new software features. And while in Korea, LG is known for playing catch-up to electronics giant Samsung, the innovations in its smartphones over the last year or so put it in good stead as a worthy competitor, and in some respects an equal.

That being said if you’re in the market for a phablet – the LG G Pro 2 is definitely one to consider. If you can live without a stylus (which the Note 3 has) then this smartphone has all the bells and whistles to keep you from wanting.

In the Philippines the G Pro 2 will be launched on April 7.   — Rappler.com