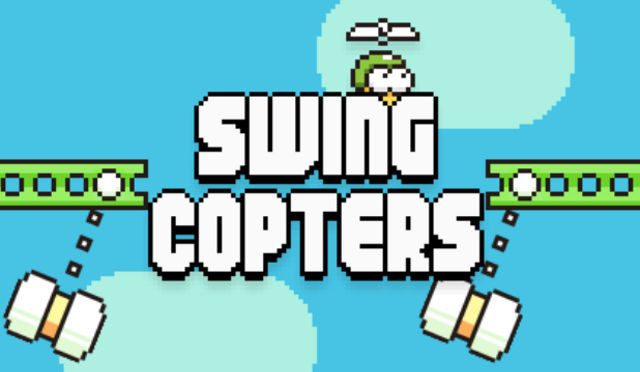 Facebook Twitter Copy URL
Copied
Swing Copters is the more difficult of the two Nguyen creations, but does it feel as rewarding as Flappy Bird? The answer may depend on what kind of gamer you are

Free to play and supported by ads, or with a US$0.99 fee to remove ads, Swing Copters stars a little fellow in a helicopter helmet as he tries to make his way into the sky.

I’ll get this out of the way early: Swing Copters is the more difficult of the two Nguyen creations, but does it feel as rewarding as Flappy Bird?

The answer to that question may depend on what kind of gamer you are relative to the social landscape of mobile gaming shaped by Nguyen’s first game. In Swing Copters, the goal is to get as high up as you can. Instead of worrying about tapping to stay airborne, you’re automatically propelled upwards by helicopter headgear.

Tapping switches your flight path bearing from right or left. To make your way past barriers and swinging hammers, you have to time your taps to go between the barriers while avoiding the hammers on either side of the barrier.

Veer too much to either side of your screen, and you fall. Hit a barrier or a hammer and you fall. The premise is simple, but the task Nguyen puts in front of you seems impossible.

Nguyen towed an extremely fine line between frustration and victory when it came to Flappy Bird. I appreciated it before because the controls were responsive, and I could tell just when to tap to keep the Flappy Bird afloat. This isn’t the case with Swing Copters.

Swing Copters tells you to tap to start the helicopter helmet and then to keep tapping to maintain a straight bearing. What happens is that it becomes very difficult to tell how much tapping is needed to maintain a straight course, so you either tap too little and hit the wall or tap so quickly that you can’t control your direction and slam into whatever’s directly above you.

Mastery of the basic concept of the game takes far too long because there’s no rhythm to your tapping that presents itself naturally. There is that same rush when you get past a barrier, but the difficulty of Swing Copters is ratcheted up immensely by that lack of an addictive mechanic to the tapping.

Sharing but not caring

The sharing mechanism for reporting your progress, the one that made Flappy Bird grow in popularity, also makes a return. The difficulty of play, coupled with the inundation of the mobile gaming stores of games with sharing mechanics makes this less of a refreshing return and more of a standard feature these days.

Sadly, in a mobile gaming landscape filled with Flappy Bird clones – and Swing Copter clones – sharing your progress with others seems about as contrived now as asking people for lives in Candy Crush Saga. Swing Copters takes skill-based mobile games to a new level, one that people might surpass eventually. However, it likely will not be quick enough to make the game a viral hit. That may be what Nguyen intended to begin with, as the addictive nature of Flappy Bird feels completely thrown away in Swing Copters.

I welcome everyone to try the game, but with one important caveat: if you can’t get past the second barrier in 30 minutes, you may be better off running to a different game to feel better about your tapping skills. That’s what I certainly did. – Rappler.com

Swing Copters was reviewed on an iPhone 5.

Swing Copters is available now on iOS and Android.