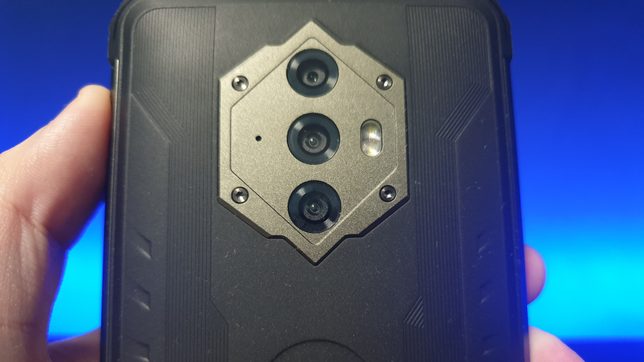 Facebook Twitter Copy URL
Copied
Hong Kong-based Blackview promises drop protection of up to 1.2 meters or around 4 feet. It is priced at P7,900.

You’ve probably never heard of Blackview before. I haven’t either prior to this engagement, so I don’t blame you. They’re not exactly a household name here in the Philippines – perhaps not yet – and it’s because they seem to cater to a specific niche rather than the general public.

Unlike the other big-name brands here, Blackview specializes in rugged phones. These are smartphones designed to withstand the elements. They’re extremely durable and tough, usually with some form of waterproof, dustproof, drop-proof, and shockproof certification. They’re also incredibly resilient, packing huge batteries that can last days on a single charge.

These are all features of the Blackview BV6600, one of the Hong Kong-based brand’s more recent ruggedized releases. I got some hands-on time with the phone, and here are my thoughts.

If you’ve never seen or held a rugged phone before, the first thing that jumps at you about these phones is their massive size and weight. I’ve seen rugged phones before, but I was still kind of taken aback by the chunkiness of the BV6600. This phone weighs around 325 grams and is about 18mm thick. It almost feels like you’re holding a brick in your hand. But of course, there’s an explanation as to why it was designed this way.

The BV6600 houses a sizable 8,580mAh battery, which Blackview says gives the phone a standby time of up to 430 hours – that’s more than two weeks – with 4G and WiFi turned on. I should point out that I wasn’t able to reach those numbers, but I did manage to get it to last about a week and a half with the phone entirely on standby – still impressive, in my opinion.

For moderate to heavy usage, you can probably get at least two days worth of battery life here. I was able to get it to last a day longer, mainly using the phone for browsing the web and streaming videos here and there. The battery, for the most part, is very resilient, as expected from its incredibly large maximum capacity.

The caveat is it takes about two hours to fully charge from zero. That’s a long time to have your phone plugged. Charging can take longer if you’re not using the adapter included in the package.

Another part of the phone that adds a good amount of bulk is the shock and drop-proof chassis. Instead of using glass, this phone’s body is largely made of a tough metal material. In my own drop tests, I barely saw any signs of damage on the phone after having it fall from a height of about four feet multiple times. Blackview says that based on their laboratory tests, the phone is only drop-proof up to 1.2 meters, which is close to four feet.

Don’t take this as advice but I think it can survive falling from six or seven feet, depending on how it lands. The phone has rubber pads on each of the four corners that kind of cushion a lot of the impact when it falls. So if it lands on any of those pads upon falling, it’ll probably just bounce a bit before planting itself on the ground.

The phone is also waterproof. Blackview claims that the internal components are coated in a special membrane that is resistant to water. The USB-C charging port also has a nice rubber cap for extra protection from getting wet.

The brand adds that the phone can be submersible in up to 1.5 meters of fresh water for up to 30 minutes. I put this to the test by tossing the phone in a small tub of water. After leaving it dipped for about two minutes, I pulled it out and it was still functioning like normal. But if I were you, I’d still do my best to try and avoid dropping this in a pool just to be on the safe side.

Once again, there are tradeoffs to accommodate these features. Some of the usual bells and whistles that we’ve come to expect from a modern phone are missing some here. The 5.7-inch screen is limited to a 1440×720 resolution and the bezels around it are pretty big. The side-mounted fingerprint scanner is hit-or-miss. And there’s no 5G connectivity.

Powering the phone is a MediaTek Helio A25 chipset paired with 4GB of RAM. Performance-wise, it’s about par for the course for an entry-level chipset – nothing more, nothing less. It could probably use a bit more optimization with Android 10, which is the software that the phone ships with. But for a lot of the basic functions, I think it’ll do just fine.

You also get a 16MP rear and an 8MP front-facing sensor. What’s interesting about this phone’s camera setup is that, according to Blackview, you can shoot underwater. I can’t talk about this particular feature yet as I haven’t tried it. For normal use, however, I think the cameras are just okay. You don’t have options for shot sizes either since you only get a single sensor.

So who is this phone for?

Anyone who’s ever dropped their phones before can probably attest to how delicate modern handsets are. I’ve met people who cracked their screens just a couple of months into buying their new phones. And regardless of what materials they’re made of or what third-party cases you wrap them up with, the majority of phones aren’t natively built to survive being dropped on the ground. And this is where rugged phones come in.

They’re purposely built for the outdoors, making them the perfect electronic companions for extreme sports enthusiasts or anyone who works in industrial jobs.

I know a lot of people today love to go biking, and I think this phone is appropriate for the activity. You can carry it with you without having to worry about damaging it in case it unexpectedly rains, for instance. And given how the BV6600 is relatively affordable at P7,900, it might be wise to have it as a second phone for when you, say, want to travel. Surely, you don’t want to be taking your new flagship on a hiking trip and risk it getting damaged, right?

Just remember, this phone can feel a little outdated – like a budget phone from five years ago. I mean if you’re looking for cutting-edge features, you should be looking elsewhere. – Rappler.com

Your next adventure-ready phone is waiting at Lazada! Use these promo codes for more savings.