‘Diablo II: Resurrected’ impressions: A faithful revival of a classic for better or worse 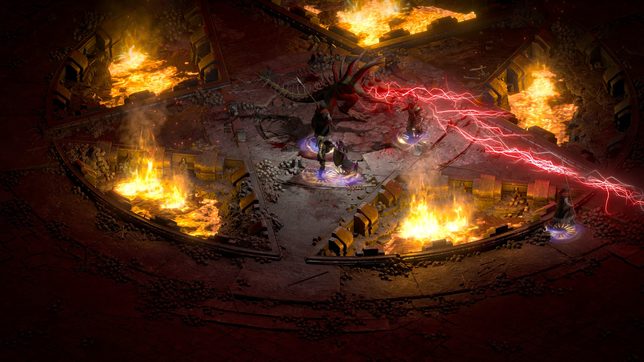 Diablo returns...with much much better lighting!

All images from Activision-Blizzard

Facebook Twitter Copy URL
Copied
'Resurrected' has amazing visual upgrades, but the gameplay does show its age a little. Nevertheless, there's fun to be had here for younger players, and a big nostalgia trip in store for older ones

Diablo II: Resurrected was reviewed on PC, with a publisher-provided code. The game releases on September 23.

Let me first say: I have never played Diablo II before this review – or quick review rather. I was too young to play it when it first came out more than two decades ago. So I went into Resurrected fresh as fresh can be. But I’m no Diablo newbie, having devoted hundreds of hours to Diablo III. I wanted to point this out just in case you think my experience with the original or the franchise as a whole affects my take on this game.

Diablo II: Resurrected, to me, is a faithful revival of a classic for better or for worse. And I say this because I don’t think all parts of the original hold up to the standards of today’s games. Okay, before you grab pitchforks and shout blasphemy at me, let me explain why I feel this way from the three or so hours I’ve spent with the game so far.

The hordes of hell have never looked and sounded this good

First off, I love what developer Vicarious Visions has done to overhaul and modernize the visuals. It’s truly remarkable seeing the amount of detail in the characters, the environments, and the hordes of hellspawn you encounter. The dynamic lighting also adds so much in immersing you into the game’s world. When you cast a spell, for example, you’ll see light touch and bounce on surfaces, which is oh so nice to look at.

You can even toggle the classic sprite-based visuals of the original by hitting the G key, and it’s really cool to see the graphical leap here. I found myself going back and forth between the two graphical settings on so many occasions just to get a sense of how the original looked back in the day.

The audio is noteworthy as well, with everything being remastered to modern standards. The clink and clank of metal armor, the fiendish grunts of the monsters, and the whistling of the sword as it cuts through air – all of it sounds fantastic.

I also love how the menus weren’t updated. I mean you can tell that they’re from a bygone era of HUD design, but they’re effective nonetheless at showing you the information you need.

Presentation-wise, I think everything hits the mark. It’s only the gameplay that I have mixed feelings for.

Underneath the shiny new graphics, Resurrected is still running on the original’s code, meaning the gameplay has been mostly unchanged, barring a few quality of life improvements. And this is kind of where the game can feel weird for a newcomer such as myself.

Let’s admit it, the combat of the original was quite janky. I mean the developers themselves said it too. This jank is still very much present here. There were times when I was swinging at the wind even though I was certain that I was supposed to be hitting something.

The lack of a hotbar to switch between skills can also take some getting-used-to. And despite being able to assign keys to change the bindings of your skills in the heat of combat, it just doesn’t feel the same.

These little quirks, if I may call it that, kind of tell me that the gameplay did not really age as well as some people think it did.

The way I see it right now, Diablo II: Resurrected feels very much like last year’s Demon’s Souls on PS5 – a game that I adore. It benefits from enhanced visuals but the gameplay is not any different from the original’s, quirks and all. I can’t fault the game for that since Vicarious Visions’ original goal was to make a faithful re-envisioning. And it’s undoubtedly faithful in every sense of the word.

The original Demon’s Souls, however, came out in 2009 while Diablo II came out in 2000. It’s obviously easier to revive a game that came out a decade ago over one that came out two decades ago. Sure, classics will always be classics, but if you remove your rose-tinted glasses and take another look at the game today, it’s hard to overlook its age.

Then again, I’m a Diablo II newbie. And if it’s any consolation, I still think the game is a lot of fun and worth a buy for the curious and the die-hard Diablo fans.

In case you’re hesitant to pay for another Blizzard-published remaster after the Warcraft III: Reforged debacle, don’t be. Diablo II: Resurrected was developed by Vicarious Visions, who’s been on a hot streak of well-received remasters as of late with the releases of Tony Hawk Pro Skater 1 + 2 and Crash Bandicoot N. Sane Trilogy.

For returning veterans, the so-called quirks I mentioned will hardly matter to you, and this is the definitive way to experience this game again. – Rappler.com